Symphony orchestras have started adding the late Ukrainian composer Myroslav Skoryk's Melody in A Minor to their concert programs to acknowledge the current humanitarian crisis in Ukraine. The short piece, which appeared as theme music in a 1980s Soviet film, became popularly known as the "spiritual hymn" of Ukraine over the ensuing decades. It's the music accompanying the video that President of Ukraine Volodymyr Zelensky played for the U.S. Congress in March. It's the piece you may have seen musicians playing in a subway station in Kharkiv on social media videos.

And it's the moving work that closes the Benefit Concert for Ukraine organized by four Peabody Conservatory graduate students from Eastern Europe that takes place at 7:30 p.m. April 15 in Peabody's Cohen-Davison Family Theatre. 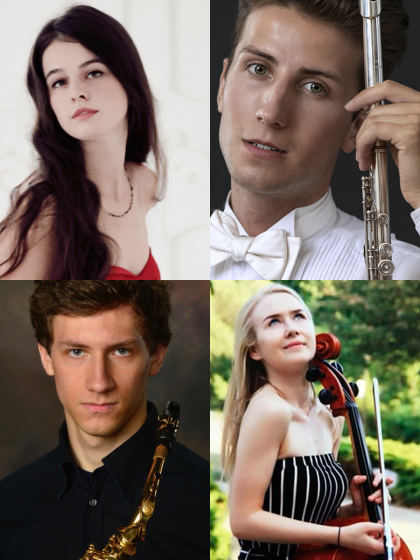 "We're from different countries, but everyone is affected," says co-organizer Ciobanu, adding that she's Moldovan, her mom's Ukrainian, and she has relatives in Ukraine. The ongoing conflict has displaced more than 4 million people from Ukraine.

"We want to show how people from different countries can come together to help people in Ukraine who have been displaced by war," says co-organizer Savelyev.

The benefit concert will feature works that are lesser-known in America, says Saubanova. They include "La Tristesse" for cello and piano by Mykola Lysenko, a lesser-known Ukrainian composer of the Romantic period who took inspiration from his country's folk music. The evening also features selections from The Eight Duets for Violin and Cello, Op. 39, by Reinhold Glière, a Soviet-era composer of Ukrainian, Polish, and German descent, and works from Tatar composer Rustem Yakhin, Georgian composer Otar Taktakishvili, and 92-year-old Ukrainian composer Zhanna Kolodub's Nocturne and Poem.

"We hope as musicians we can evoke something good in our audiences' minds and hearts," Saubanova says. She is tapping into the ever-changing and intense emotions that she and her co-organizers have experienced over the past weeks. Although they're from different countries, they all say they have been shocked by recent events. They each have friends or family members who are of military age and therefore cannot leave Ukraine. Their families' livelihoods are becoming precarious.

And they're each in America studying, unable to even think about visiting home.

"We're from different countries, but everyone is affected."
Evanghelina Ciobanu
Cellist

"All my colleagues and friends in Ukraine are doing a lot of volunteering work, traveling to neighboring countries to buy equipment, and I'm sitting in a country where it's safe and have to do assignments for school rather than speak about what's happening in the world, and it's been hard," Savelyev says. "The first month, I wasn't able to think, I was just in a state of complete shock. I got to play a benefit for Ukraine recently and that's when I started to feel a little better because I'm able to see opportunities to put my emotions in support of the people who spend days on the subway station underground, those who lost their apartments, those who now live in Poland in a room with 30 other people."

The students are inviting in-person and virtual concertgoers to donate to Johns Hopkins Center for Humanitarian Health using the code "Ukrainian assistance." Donations will galvanize frontline NGOs and agencies in European countries receiving refugees from the Ukrainian conflict. The center's leaders are providing technical guidance and uniting experienced humanitarian responders to coordinate the outpouring of support from countries around the world. Donations to the Johns Hopkins Center for Humanitarian Health will provide flexible funding to enhance immediate response to the Ukrainian crisis and improve systems for future catastrophes.

"Making this performance in Baltimore, our current residence at our current university, was something that we could do to support the people," Savelyev says. "I mean, it's obvious what this concert is for." 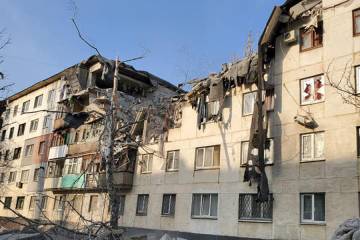 The ongoing crisis in Ukraine

Published March 31, 2022
Five Johns Hopkins experts discuss the near- and long-term global consequences of the conflict, including supply chain disruption, humanitarian disaster, and the heightened potential for a broader war