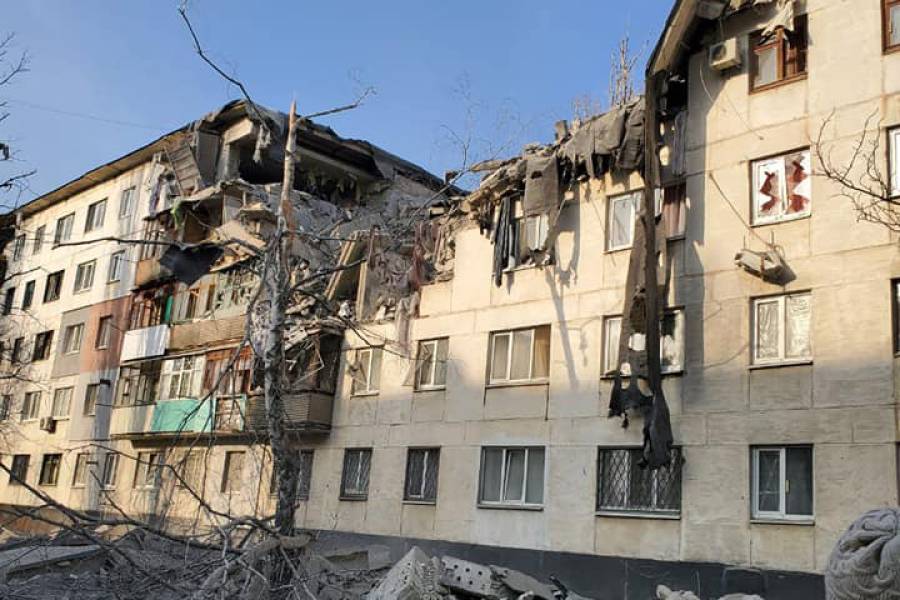 Image caption: A residential building in the Ukrainian city of Lysychansk after intense shelling on March 31

Perspectives on the ongoing crisis in Ukraine

Five Johns Hopkins experts discuss the near- and long-term global consequences of the conflict, including supply chain disruption, humanitarian disaster, and the heightened potential for a broader war

On Wednesday a group of Johns Hopkins experts gathered virtually to discuss the global ripple effects of the ongoing crisis, both near- and long-term. Below are highlights of the event, available to watch in full here.

The war in Ukraine signals the end of global supply chains as we've known them, according to Tinglong Dai, professor of operations management and business analytics at the Johns Hopkins Carey Business School.

Historically, he said, our supply chains have operated on two key assumptions: the separation of geopolitics and business, and the belief that rational decision-making ultimately prevails. "Obviously these assumptions have been destroyed by Russia's action in Ukraine," Dai said. "And as a result, we are expected to see a new kind of Iron Curtain which could emerge, with Russia and its allies on one side and the West on the other side."

The consequences, he said, "in terms of more poverty, loss of innovation and job opportunities, are something we will all have to pay for in future decades."

While Russia's and Ukraine's contributions to the global GDP are minor, the war's logistical impacts are enormous. The result of 36 nations closing airspace to Russia—and Russia reacting in kind—is that air freight from China into Europe or the eastern U.S. must be rerouted or switched to slower or costlier modes of transport, Dai said.

Damage can be expected to China's Belt and Road initiative, a trillion-dollar effort to reinforce the dominance of a China-centered global supply chain. The U.S. and Europe are likely to scale back their dependence on critical Chinese products, Dai said, including medical supplies, electric batteries, and semiconductor materials.

Ukraine war is more about disinformation than cyberattacks

No clear pathway to peace in Ukraine

Will a new Iron Curtain fall on shipping?

"Everyone who has seen the picture of a pregnant woman on a stretcher in front of a maternity hospital, whose front has been blown off, understands the brutality of this war and its terrible humanitarian consequences," says Leonard Rubenstein, professor of practice in the Bloomberg School of Public Health.

Ten million Ukrainians are now estimated to be displaced, he said, about 4 million of those having fled their country. Another 13 million are reported to be stranded in place.

The blockages of humanitarian corridors are severe, "preventing medications and all kinds of food [and] equipment needed for care to get through," Rubenstein said. At the same time, critical health needs are escalating while many health care workers are either fleeing or fearful of going out in public. "Trauma cases … have increased dramatically because of injuries from explosives, and yet the capacity to address them is very slim," he said.

"It is, unfortunately, part of Russian military doctrine that if Russian conventional forces are under threat, there is written into policy the potential for what they call a tactical nuclear weapon use—or a small nuclear bomb about the size of Hiroshima or some fraction of it," said Gigi Gronvall, senior scholar at the Johns Hopkins Center for Health Security. The strategy is termed "escalate to de-escalate."

In reality, Gronvall said, "this of course would be very risky and dangerous for potential for further escalation"—and would break an 80-plus-year global norm against the use of nuclear weapons.

Chemical weapons also remain a concern, as Russia has supported their development as well as their previous use in Syria. Recent reports suggest that members of an informal Russian-Ukrainian negotiating group may be suffering effects from some kind of chemical poisoning. "It does make it very hard to negotiate the end of the war if the negotiating team can't be guaranteed their safety," Gronvall said.

Rather than the high-tech attacks many predicted for this war—causing blackouts, shutting down air control systems—"what we're seeing instead is more insidious, more low-profile operations … designed to be covert or semi-covert," said Thomas Rid, professor of strategic studies at the School of Advanced International Studies.

One critical attack targeted Viasat, a U.S.-based satellite broadband services provider the Ukrainian government and military relies upon. Though Viasat has not named who is responsible for the attack, Ukrainian officials blame Russian hackers.

Leaks of personal data are also significant, Rid said. This week, the Ukrainian military intelligence service, GUR, publicly revealed the names of 620 FSB officers—shorthand for officers of the Federal Security Service of the Russian Federation—including their addresses and phone numbers.

Inside Russia, past and present

Russia has failed to find its identity in the years following the collapse of the Soviet Union, according to Sergey Radchenko, professor at the School of Advanced International Studies. "They were just drifting out there, without any clear ideology, without any ideas to embrace."

"Unfortunately what we see in place is a legal system for repressions that is unlike anything that Russia has seen since the dark days of the Soviet Union."
Sergey Radchenko
Professor, School of Advanced International Studies

The conflict of today traces directly back to 2014, he said, with Ukraine's overthrow of President Viktor Yanukovych, Russia's annexation of Crimea, and the Russian-sponsored war in Donbas. "I think Vladimir Putin thought that this was an unfinished project for him," Radchenko said.

Putin recently spotted a window of opportunity, he said, with the world distracted by COVID-19 and the Biden administration focused on China. Putin also seemed to believe "Ukraine was already assigned to the Russian sphere of influence," not covered by NATO security guarantees.

Due to Russia's weak performance in the war so far, Radchenko said, its original ambitions—to overthrow the Ukrainian government and replace the president—appear to be relenting somewhat, and the two sides are now negotiating. Russia has indicated it may settle for lesser gains, including promises that Ukraine will not join NATO or develop nuclear weapons—and that it will recognize Donbas as independent and Crimea as Russian territory. However, "all of those claims are potentially unacceptable to the Ukrainians," Radchenko said.

Meanwhile, Russia continues its backslide into authoritarianism, with draconian measures such as threatened imprisonment for those critical of the war. Many Russians are afraid to speak out, and many are leaving the country. Yet a large percentage do support the war, he said, "because they succumb to the state propaganda … and they buy into this narrative."

When asked a few years ago if Putin was another Stalin, Radchenko said he would have vehemently rejected the notion. "And if you ask today, I'll still say, of course not. … But unfortunately what we see in place is a legal system for repressions that is unlike anything that Russia has seen since the dark days of the Soviet Union."