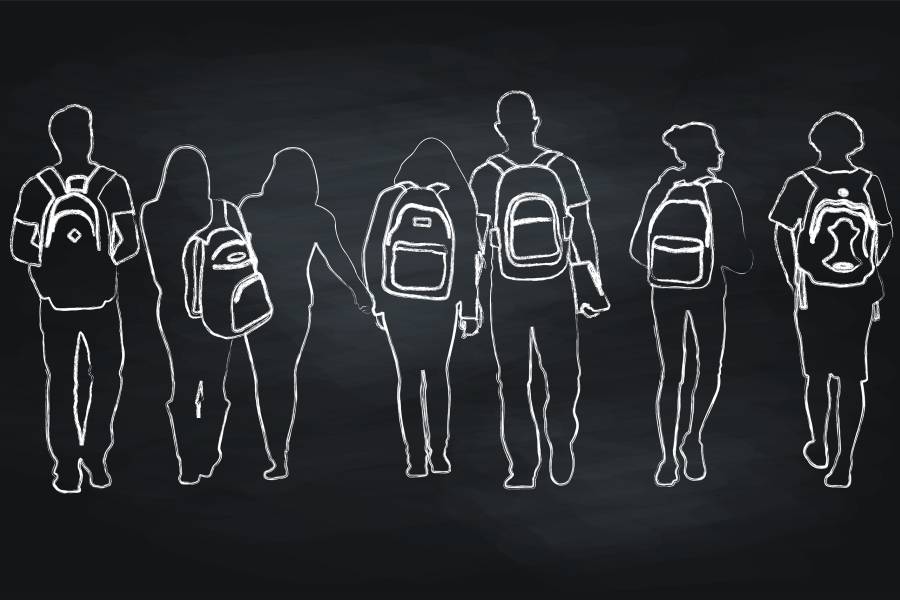 A pandemic test of teenage resilience

The COVID-19 pandemic has provided some eye-opening lessons on how to improve teen wellbeing and there are reasons to be hopeful for the future, Johns Hopkins experts say

The start of the COVID-19 pandemic two years ago abruptly altered daily life for teenagers, who were separated from friends and classmates and introduced to new fears and responsibilities.

"They were often left alone because parents had to keep working," says Carol Vidal, an assistant professor of psychiatry and behavioral sciences at the Johns Hopkins University School of Medicine. She saw adolescent patients taking care of younger siblings, falling far behind in their schoolwork, and feeling trapped at home.

Many were forced to confront illness and death among loved ones, and struggle with financial instability, adds Tamar Mendelson, a Bloomberg Professor of American Health who directs the Johns Hopkins Center for Adolescent Health. Particularly in low-income communities, rising numbers of teens became disconnected from education and employment, she says. Youth disconnection increases risk for long-term problems over adulthood, including higher risk for unemployment and incarceration.

"Mental health was a problem before the pandemic. This wasn't new. We need to teach young people how to manage stress and reduce stigma."
Tamar Mendelson
Bloomberg Professor of American Health, director of the Johns Hopkins Center for Adolescent Health

Now that same age group is experiencing yet another sizeable shift: After a fall and winter of rolling quarantines and temporary closures, schools are fully reopened and COVID-19 restrictions are falling away. "We're seeing this return to normal," says Jennifer Katzenstein, the director of psychology, neuropsychology and social work, and co-director of the Center for Behavioral Health at Johns Hopkins All Children's Hospital.

Of course, "normal" doesn't look like it did back in 2019, and Katzenstein says she's alarmed by the increasingly high rates of anxiety and depression among young people. Just over the past several weeks, there's been a spike in drug overdoses and suicide attempts among teens in Florida, she adds.

But overall, Katzenstein—and other mental health researchers working with adolescents—are optimistic. Although recent traumas will require time and resources to process, the pandemic has provided some eye-opening lessons on how to improve teen well-being, and there are reasons to be hopeful for the future.

Quite a few teens actually thrived thanks to COVID-induced changes, notes Mendelson, whose research team surveyed 150 predominantly low-income high school students in Baltimore in 2021. Nearly half reported that their pandemic experiences were either positive or neutral rather than negative. "They had more time with family, more sleep, and more time to do things they like," Mendelson says.

The results surprised her collaborator Laura Clary, assistant scientist in the Department of Mental Health at the Johns Hopkins Bloomberg School for Public Health. "I expected, 'No school! Yay,'" Clary says. "But spending time with their families was the number one positive."

Being away from school also translated into less bullying, Clary notes. "They weren't spending time with kids who weren't their friends," she explains. And although teens were logging into social media a lot more, it's unlikely that led to a spike in cyber bullying. "Bullying in school and online are highly correlated. Bullying in school often moves online after school," Clary says.

All of those extra hours on the internet proved to be a mixed bag for teens. Some were invaluable for keeping up social ties, Mendelson says, while other activities were less constructive.

Vidal notes that there's been a sharp increase in eating disorders during the pandemic. "Girls go online and start to look at ways to lose weight," she says. There have also been adverse side effects of TikTok, Vidal adds, and not just because of the proliferation of its dangerous "challenges." One of the oddest is the development of TikTok tics, a phenomenon she's seen among her teenage patients. After repeatedly watching videos featuring content creators with tics, they then mimic the neurological disorder, she says.

The good news is that many of these issues have proved temporary, says Vidal, who is part of a group of doctors promoting the Urgency of Normal Toolkit. Their message is that returning to reliable, in-person school is vital for getting kids back on track after such a prolonged disruption. "My patients recover well with consistency," Vidal says. "Eating habits and sleep become disrupted when you don't have structure." Plus, being in a building with teachers and counselors can be a lifeline for young people dealing with abusive situations at home. "Schools are where they find other adults to talk to," she says.

Adolescent mental health? There’s a ‘vaccine’ for that

Schools are also where researchers can observe the lingering effects of the past two years. "Kids don't know how to get along with other kids any more," says Clary, who's talked to students across the country about what they're seeing in classrooms and hallways. Physical fighting and sexual harassment incidents are up, exacerbating the high levels of anxiety so many teens have already been feeling.

So in addition to the academic supports teachers are providing to kids who have fallen behind, there's been a push to offer more mental health resources. Clary has seen some schools institute a weekly check-in via cell phone, allowing staff to assess where problems are lurking and come up with ways to address them.

One option is a 12-session program that Mendelson and Clary used with eighth graders in Baltimore for several years prior to the pandemic, called RAP (Relax, be Aware and do a Personal rating). It focuses on mindfulness, Mendelson explains. "They checked in with themselves and identified how they were feeling," she says. "They learned techniques for sitting with difficult emotions without doing something impulsive that could make a stressful situation worse."

Half of the group of 150 high school students in that 2021 survey had completed this program, and the results were striking. The former RAP participants reported significantly lower levels of anxiety during the pandemic, as well as less depression. Mendelson is now talking to schools to better understand how they can integrate this kind of programming and its protective effects. "My hope is this is an opportunity to highlight data on how important these programs are. Mental health was a problem before the pandemic. This wasn't new," she says. "We need to teach young people how to manage stress and reduce stigma around mental health problems."

"I expected, 'No school! Yay! But spending time with their families was the number one positive."
Laura Clary
assistant scientist, Department of Mental Health, Bloomberg School for Public Health

Vidal works with patients on-site at four different high schools in Baltimore, which is another model that she'd like to see replicated. Even when parents know their kids need mental health care, logistical hurdles can get in the way. "They may not have transportation or have to work multiple jobs," she says. Making services more accessible is an easy way to fix that. "If we're aware of the importance of offering support, kids will do well," Vidal adds.

The same is true at home, Katzenstein explains. Teens need to have open communication to have a sense of stability and safety. "Us as parents build resilience with them," she says. "For a majority of kids, we are so hopeful they'll be able to move forward."

What no one knows is how long that will take and what other bumps may lie down the road ahead for teens. "It's important to study this cohort over time," says Clary, who is committed to following them into young adulthood—and beyond—to help future generations.