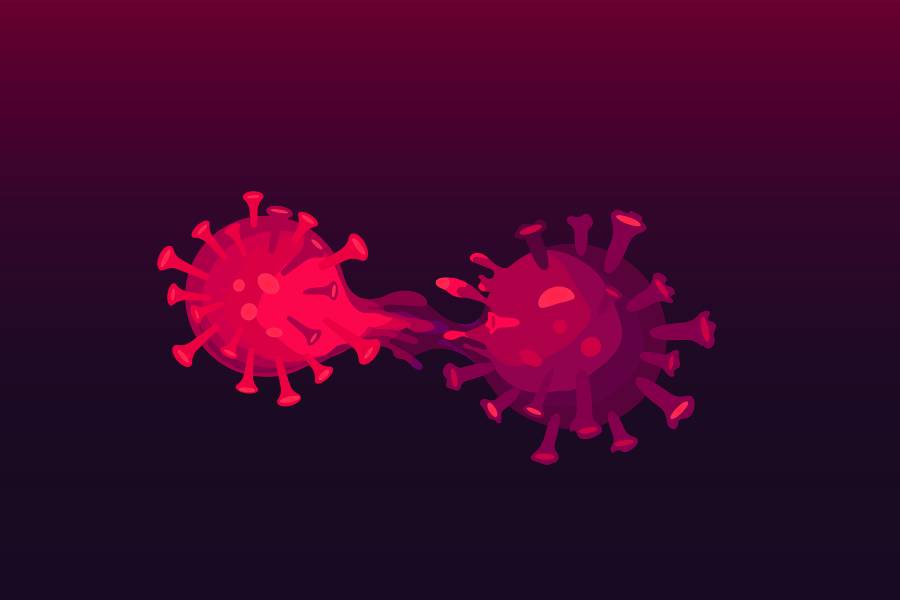 Here we go again: The BA.2 version of omicron

Even as BA.2 and "deltacron" set off feelings of panic or exhaustion, vaccinations and boosters continue to provide the best protection against severe disease, says Johns Hopkins immunologist Andy Pekosz

By Interview by Josh Sharfstein

At this point in the pandemic, the public is understandably skittish about any news threatening to thwart our progress toward normalcy. Just as we learned that those who are vaccinated and boosted have good protection against omicron, and it seemed safe to relax some restrictions, terms like "deltacron" and "BA.2" set off familiar feelings of panic—or at least exhaustion.

But in this Q&A adapted from the March 22 episode of the Bloomberg School of Public Health's podcast Public Health On Call, virologist Andrew Pekosz offers some reassurance. Speaking with host Josh Sharfstein, vice dean for Public Health Practice and Community Engagement, Pekosz says variants and subvariants are to be expected, and our vaccinations and boosters continue to protect well against severe disease. Pekosz also discusses who should be most concerned about getting sick, what might happen in the coming weeks, and what we can learn about the omicron variant from the Hong Kong and China COVID-19 crises.

Tell us what's happening with the new omicron subvariant.

Three different versions of omicron are sort of lumped together: BA.1, BA.2, and BA.3. BA.1 caused most of the cases globally throughout December and January. What we're seeing now is BA.2, its sibling, following in its footsteps, and making some inroads in terms of causing cases worldwide.

They're very closely related, but distinct. All the properties of BA.2 so far seem to be similar to what we saw with BA.1 in terms of its ability to escape vaccines, its transmission rate, and its relatively low potential for causing severe disease compared to [a variant] like delta. As a virologist, it's not unexpected, but I understand that everyone's a little tired of hearing about variants coming through.

Does it look like the people who had omicron infection with BA.1 can now get infected with the BA.2 subvariant?

The initial data suggests that if you've been infected with BA.1, you have pretty good immunity against BA.2. It's difficult to predict these things in a pandemic, but my sense is that BA.2 will be moving through populations that are either unvaccinated, haven't been boosted, or haven't been infected recently. The data say BA.1 should protect against BA.2, and probably vice versa.

Since the U.S. had so many infections here, do you think there's a chance we don't encounter the problem that Europe has with BA.2?

That is my hope, based on the numbers that we're seeing now. There are a significant number of people who either haven't been vaccinated or haven't been boosted in the U.S.—and boosting is really critical for maximizing your protection from either BA.1 or BA.2. I am optimistic that there's enough population immunity in the U.S. to limit virus spread.

Absolutely. There's a feeling that we should always blame the virus or the variant for what's going on. I think we have to remember that we're in a very different stage now than we were at Thanksgiving or Christmastime when it comes to our public health interventions. That's going to factor into the case numbers we see.

"At the end of the day, vaccination and boosting are doing a fantastic job of limiting severe disease and an okay job of limiting infection. They really are the tool to get us back to normalcy."
Andrew Pekosz
Virologist, Bloomberg School of Public Health

Any other variants on the horizon that you're watching? I've heard about "deltacron," but I don't know if that refers to one of the subvariants we've been discussing.

Deltacron has an interesting history. For a few months now, people have been reporting sequences that look like a combination of the delta variant and the omicron variant. Many of those ended up being sequencing artifacts and not real viruses.

Over the past two weeks, reports have emerged of viruses that have sequences from both of those variants. It's not uncommon with coronaviruses to see this. It's called recombination. We don't know if the threats from deltacron are very significant right now; it seems to resemble the regular omicron.

Other than that, there's a small number of changes to omicron that scientists like myself are monitoring but [aren't at] the level that should concern the general public.

Bottom line: the more variants we get, the more some things stay the same—like get vaccinated against it.

It's amazing how that message just maintains consistency. We did have to add the booster to deal with omicron, but at the end of the day, vaccination and boosting are doing a fantastic job of limiting severe disease and an okay job of limiting infection. They really are the tool to get us back to normalcy.

There are some places in the world that are not experiencing normalcy right now. Hong Kong comes to mind, and China, with major lockdowns. What do you think is going on there?

I think it's probably two major factors. Both of those countries have tried to practice a "COVID zero" policy—meaning they've been locked down. They've instituted very strict public health interventions to limit numbers of cases. And omicron is so transmissible that it's been able to overcome public health defenses those countries had in place that worked against other variants. What they've done for other variants isn't working as well against omicron, and you're seeing these surges in cases.

The second thing is, both of those countries have issues with their vaccination programs. Hong Kong in particular has a relatively low vaccination rate in their elderly population—the population most susceptible to severe COVID. And some of the vaccines that have been used in China don't have as durable an immune response as our mRNA vaccines. Again, it starts with omicron being a more transmissible variant than any that have come before, and now you have to deal with that in a population that has been relatively protected from infection. It poses a big public health problem for those countries.

Looking at the number of deaths we're seeing in Hong Kong from omicron among older adults, do you think it suggests that the story we were telling ourselves about omicron being milder might have just been a reflection of what that variant was doing in a relatively well-vaccinated population—and that the virus is actually quite serious for people who are naive to coronavirus?

That's an incredibly important point. Omicron may not be as virulent as delta was, for instance, but it certainly is comparable to some of the earlier SARS-CoV-2 isolates that we were so concerned about when they first entered the population. If you don't have immunity to SARS-CoV-2, omicron is a very dangerous virus. It's going to continue to target those populations that don't have immunity, because those are the susceptible ones, the ones that the virus can gain access to and [who will] spread it.

This article originally appeared on the Bloomberg School of Public Health website.