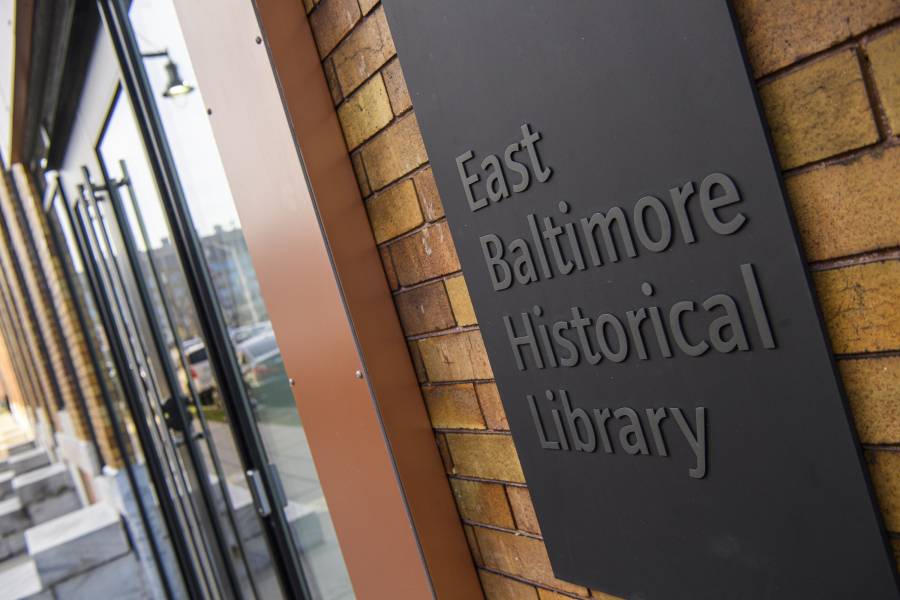 The space, developed with support from Johns Hopkins and located in three row homes attached to Henderson-Hopkins School, aims to preserve and celebrate the history of East Baltimore

Johns Hopkins leaders joined city officials and Baltimore community members today to officially open the East Baltimore Historical Library, a community space that preserves and celebrates the history of East Baltimore. Nestled in a stretch of row homes adjoining Henderson-Hopkins School, the library is envisioned as a space where generations of Baltimoreans will gather to reflect on their shared history.

"I [stayed involved in the project] because I believe in the future of East Baltimore and in the bold, brilliant, and beautiful children of the Henderson-Hopkins School," said Annette Campbell Anderson, a professor at the Johns Hopkins School of Education and a longtime EBHL planning committee member. "Most specifically, I am thrilled to see the expanded programmatic opportunities that this space will afford our children as well as future generations of families within East Baltimore."

Plans for the East Baltimore Historical Library originated as a response to the creation of a mixed-use, mixed-income development that would blend residential, commercial, and institutional properties in the area surrounding Henderson-Hopkins, spearheaded by East Baltimore Development Inc. Community organizer Nia Redmond proposed the idea of the library as a place to preserve the history of the neighborhood as part of the development process.

"I'm thankful for Nia Redmond and the fact that she realized the power and significance of who tells our story and the fact that we can keep our story alive even if those who lived it are gone," said Alicia Wilson, vice president for economic development at Johns Hopkins University.

The library space includes galleries, exhibits, rooms for talks and performances, and a conference room. The library's collection features photographs, documents, art, and artifacts portraying life in East Baltimore. Programming by the library will include workshops on genealogy, family scrapbooking, and storytelling, as well as theatrical presentations on historical themes.

In addition to providing support for the library's programming, Johns Hopkins University pledged a $100,000 match toward a secondary bond bill passed to begin construction on the project. The university's Office of Government and Community Affairs has also provided financial support for the construction project management and for the groundbreaking ceremony in February. The School of Education provided funding for History Matters, the group curating the library's opening exhibit.

"As a gathering space for community members, a resource for Henderson-Hopkins, and a place to chronicle the history of East Baltimore and our city, the East Baltimore Historical Library is built to carry this history into the present, and to resoundingly affirm the identities and aspirations of those who have lived here, who live here now, and who will live here in the future," said Ron Daniels, president of Johns Hopkins University.

Among the library's first projects is a collaboration with Henderson-Hopkins, a contract school of Baltimore City Public Schools operated by the Johns Hopkins School of Education and Morgan State University. The I AM East Baltimore Story Book Project is an oral history project for 4th- to 8th-grade students to tell their family's stories. In time, the library will expand the oral history project to include the stories and memories of aging East Baltimore residents.

In remarks opening the library, Christopher Morphew, dean of the Johns Hopkins School of Education, touted the transformational effect of preserving history for younger generations and praised the library for its ambition to be a gathering place for Baltimoreans.

"This library will hold its community's memories, its common identity, its past. It is a memory collector," Morphew said. "And it will work alongside a school that nurtures the community's life force, its bright young people, its future."

The East Baltimore Historical Library is dedicated to Del. Hattie Harrison, who served in the Maryland General Assembly from 1973 until her death in 2013. Harrison, a neighborhood champion and representative of Maryland's 45th district containing Baltimore City, shepherded legislation to establish the library in 2012, securing a grant of $250,000 for the organization.

"By protecting and upholding this deep knowledge of the history of East Baltimore, one that is informed by the lived experiences of our long-term residents, we can not just restore our city to its former glory but transform it into a modern reflection of its history and our shared vision for a better, brighter future for East Baltimore and all our communities," said Baltimore City Mayor Brandon Scott. 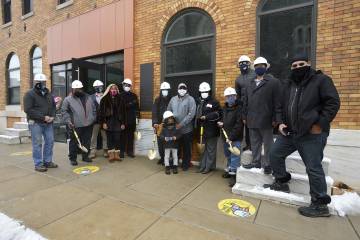 Published Feb 12, 2021
The library will preserve the history of East Baltimore and will be housed in three row homes adjoining Henderson-Hopkins School