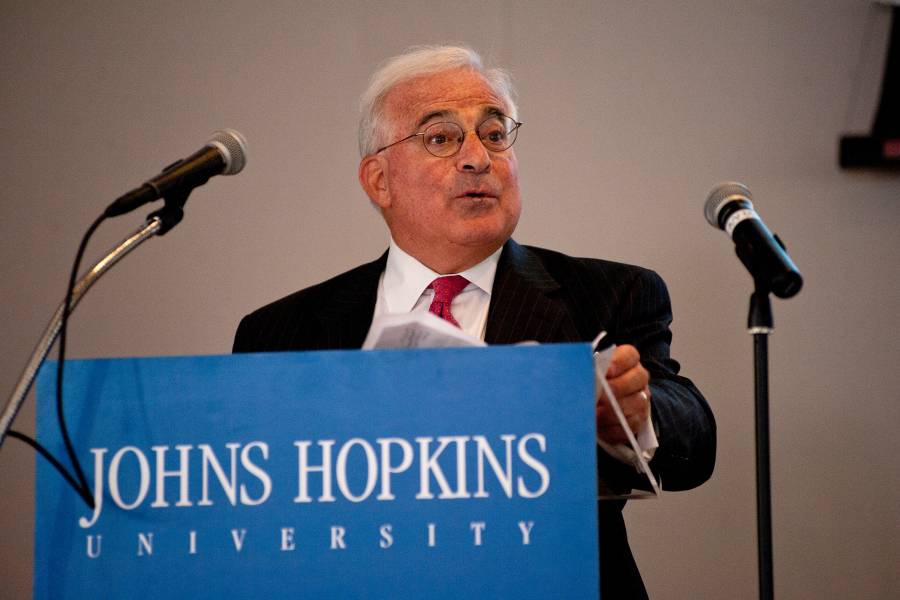 Schnydman, a three-time lacrosse All-American and a colorful, beloved figure on campus, spent nearly five decades at Johns Hopkins, including as executive assistant to the president and secretary of the board of trustees from 1998 until his retirement in June 2012

Jerome "Jerry" Schnydman, a 1967 Johns Hopkins University graduate and lacrosse legend who was also a colorful, beloved, and widely admired fixture on campus over more than three decades of distinguished service to his alma mater, died early Monday after a long bout with cancer. He was 77.

In all, Schnydman spent the better part of five decades at Johns Hopkins, first as a student-athlete, then in undergraduate admissions, alumni relations, and finally in the president's office, where he served as executive assistant to the president and secretary of the board of trustees from 1998 until his retirement in June 2012.

"There was simply no one like Jerry Schnydman. He gave his all to his beloved alma mater from the moment he walked onto Homewood Field to the moment he left the President's Office for the last time."
Ron Daniels
President, Johns Hopkins University

"There was simply no one like Jerry Schnydman. He gave his all to his beloved alma mater from the moment he walked onto Homewood Field to the moment he left the President's Office for the last time. Bringing unceasing optimism and joie de vivre to every situation, Jerry could and would talk to anybody, freely and generously giving his wise counsel to generations of Hopkins students, colleagues, and of course, presidents, including me on occasions too numerous to count," JHU President Ron Daniels said. "But anybody who knew Jerry, knew that his love for Hopkins was only eclipsed by his love for his family. Our thoughts are with his wife Tammy, their kids, and grandkids and we will always be truly grateful to them for sharing so much of Jerry with his second family at Hopkins for so long."

Schnydman served as co-captain of the Blue Jays team that won the national championship in 1967, and he was inducted into the Johns Hopkins Athletic Hall of Fame in 1998. He is also a member of the National Lacrosse Hall of Fame and the halls of fame for the Greater Baltimore Chapter of the Lacrosse Foundation and Baltimore City College High School. 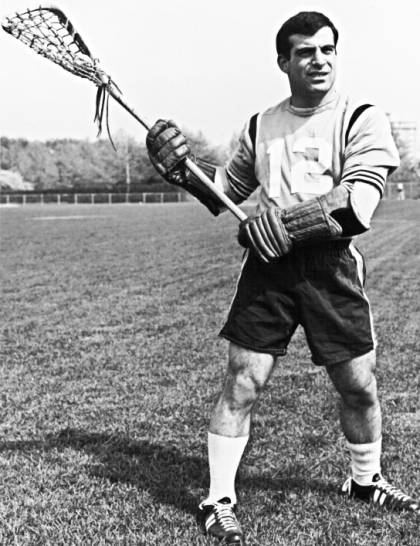 Image caption: Jerry Schnydman was a first-team lacrosse All-American in 1966 and 1967 and co-captain of the Hopkins team that won the national championship in 1967.

"When I was accepted to Hopkins my senior year at City College, it was a dream come true," Schnydman told The News-Letter in 2017, when he and other members of the 1967 team were recognized at Homewood Field on the 50th anniversary of their national title. "When I began playing lacrosse at 12 years old, I would take two buses to get to Homewood every weekend for the game. Playing for Hopkins is something I will always cherish."

Schnydman graduated in 1967 with a degree in English and went on to an eight-year career in the insurance and pension business. He returned to Hopkins to join the Office of Undergraduate Admissions, working his way from assistant director to director, a post he held for nearly 11 years. He next served as executive director of Alumni Relations, from 1989 to 1998, when he moved to Garland Hall to become executive assistant to the president and secretary of the board of trustees.

On the eve of Schnydman's retirement, the university announced that the atrium of the Brody Learning Commons—named for former JHU President William R. Brody, for whom Schnydman served as executive assistant for a decade—would be named the Schnydman Atrium in his honor. JHU also established the Jerome D. and Tamara Schnydman Fund in honor of Jerry and his wife, Tammy, to support Homewood undergraduates of merit who apply for financial assistance.

"We had a lot of fun together," Brody said. "He was energetic, he was funny, he was incredibly thoughtful and caring. He was my fixer when we had problems—someone would call up with a complaint and Jerry would fix it.

"I have to say, typically people don't like the chief of staff because he's a gatekeeper to the president. But I think people liked Jerry more than they liked me."

He recalled a time in 2008 when, with the defending national champion Blue Jays having stumbled to five consecutive losses, Schnydman approached coach Dave Pietramala with an idea to help the team loosen up. At practice, Pietramala told his players that he was adding a couple of new walk-ons to the team, then called out Schnydman and Brody—who took the field in full pads and practice gear and joined the players for their work out.

Hopkins defeated rival Maryland 10-4 in its next game and went on to win seven more games in a row before losing to Syracuse in the NCAA championship game.

"That was vintage Jerry," Brody said. "He was always up for doing something fun, and also important." 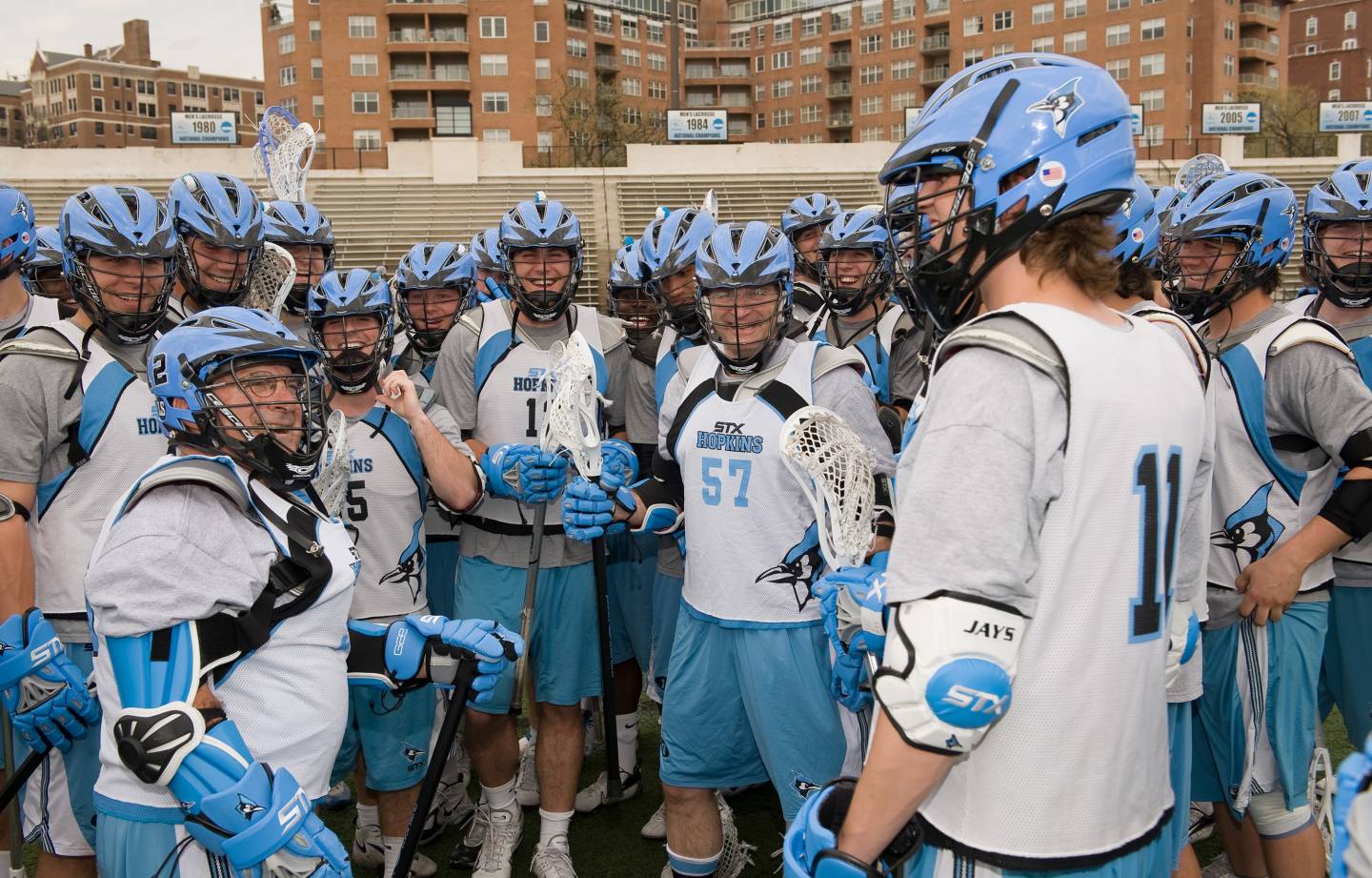 Image caption: Jerry Schnydman (left) and President Bill Brody (57) surprised the Hopkins men's lacrosse team by suiting up for a practice in April 2008.

Ross Jones, a close aide and advisor to six JHU presidents over his nearly four decades at the university, forged a lifelong friendship with Schnydman that dates to Schnydman's days an undergraduate. Jones was instrumental in Schnydman's return to Hopkins as an employee in the admissions office, and he also preceded him as secretary of the board of trustees.

In a wide-ranging 1999 conversation that is part of the university's oral history project, Schnydman recalled that Jones—then the executive assistant to President Milton S. Eisenhower—contacted him one summer because the lawn in front of a fraternity house on Canterbury Road had grown very high, and Eisenhower wanted it cut. Schnydman, then a rising senior and president of the university's interfraternity council, cut the grass himself that very same day.

"I still remember that day vividly and how pleased I was to meet such a personable, dependable young man," Jones said.

"Over the years, Jerry developed an uncanny ability to size up people and sensitive issues and situations, react to them quickly, and produce positive outcomes," he added. "And he always did so with good humor. Humor and insight were special gifts that served him well. And he could tell wonderful, colorful Hopkins stories, non-stop, if you let him, all with great humor and a glint in his eye. It has been my great good fortune to know him. My admiration and affection for him are unbounded."

Julie Morgan, a 1976 Hopkins graduate who worked for the university for 35 years, including two decades as assistant secretary of the board of trustees alongside both Jones and Schnydman, remembered Schnydman for his sense of humor, his kindness, and his convivial nature.

"Jerry Schnydman treated his staff with respect, had high expectations, and encouraged us with lavish praise," she said. "He was also one of the funniest people I've ever known, which helped us through rough patches in the office. Whenever someone had a family issue, he would tell us just to go take care of it, and he was similarly dedicated to his own family. I had tremendous affection for him, as did countless friends and colleagues."

Schnydman is survived by his wife of 54 years, Tammy, son Andy, daughter Becky, and four grandchildren. A funeral service will be held Thursday, Oct. 28, beginning at 11 a.m. at Beth El Congregation, 8101 Park Heights Ave., Baltimore. Contributions to the university in Schnydman's memory can be made to the Jerome D. Schnydman Scholarship Fund. 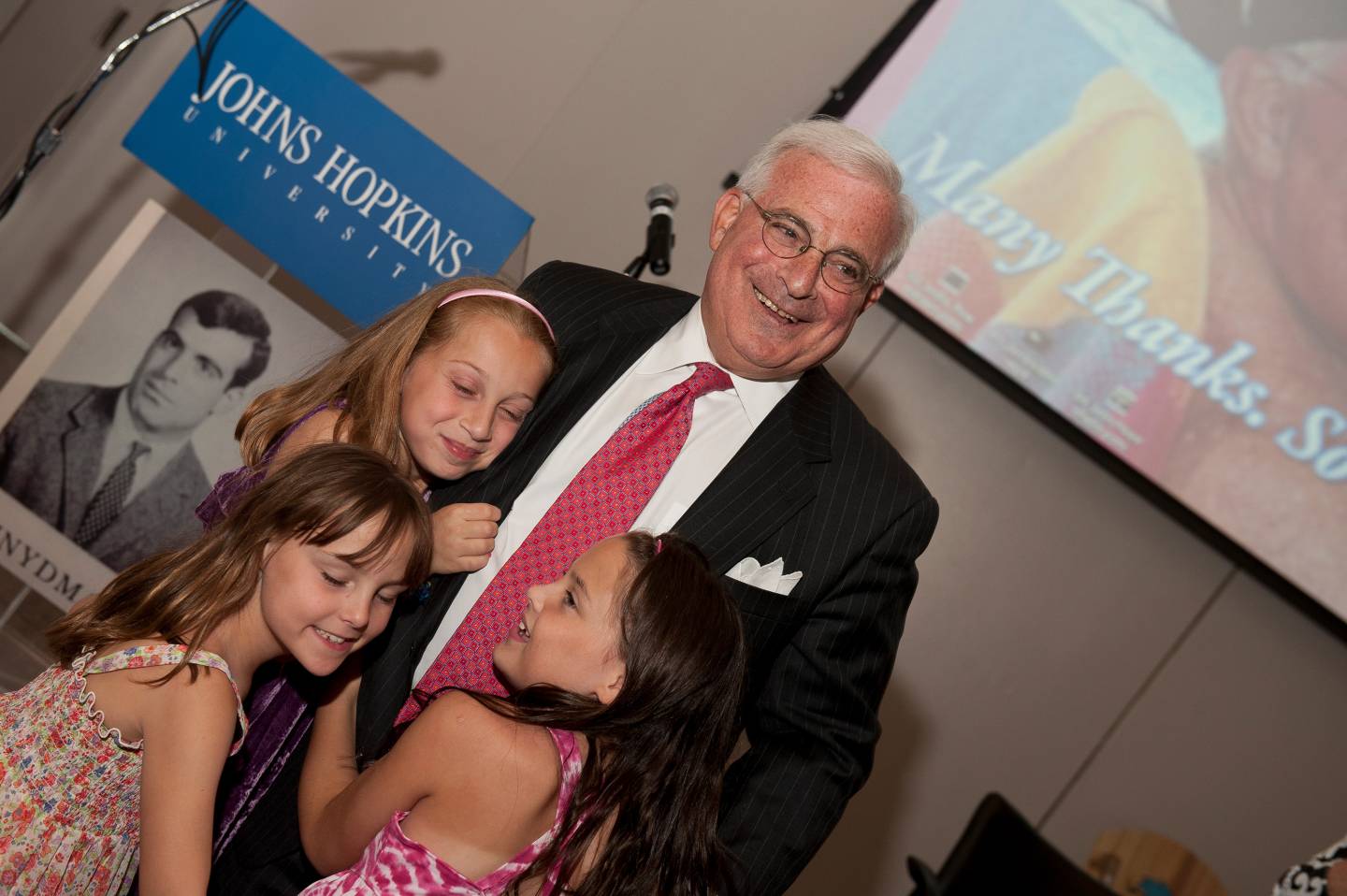 Image caption: Jerry Schnydman with three of his four grandchildren at his retirement celebration in June 2012.