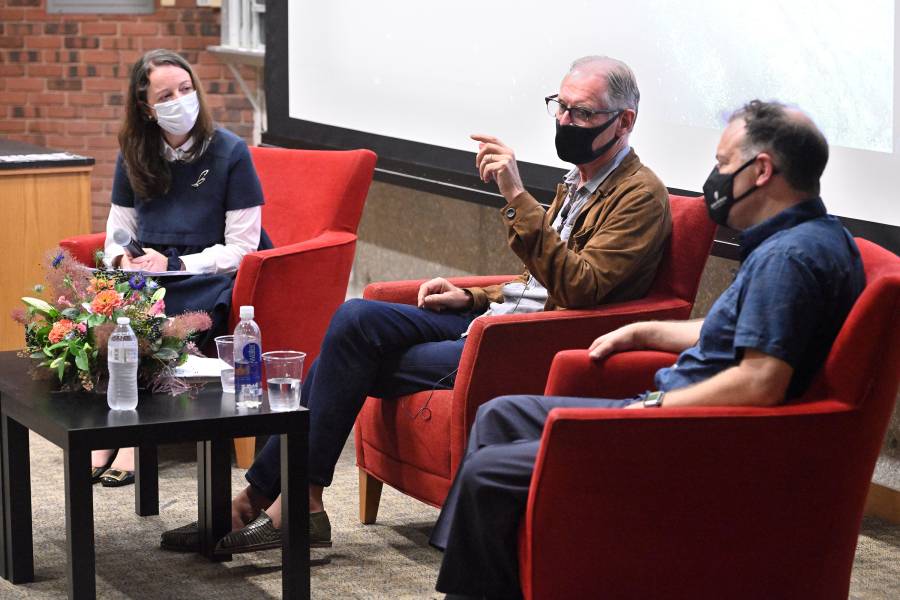 Image caption: Nobel Laureate Adam Riess (right), U.K. Poet laureate Andrew Motion, and moderator Karen ní Mheallaigh, Johns Hopkins classics professor, participate in a discussion on our shared impulse to understand the universe and our place in it during an event at Mudd Hall on Oct. 7.

How do you properly mark the occasion of the launch of the world's largest, most complex telescope yet, and the future explorations and discoveries it represents? At Johns Hopkins' First-Year Seminars, you invite a cosmologist and a poet to spend an evening in dialogue, and they discuss their shared impulse to understand the universe and our place in it, the gifts and limitations of language, and the intersections and entanglements of science and the humanities.

"Physics and poetry use different languages to gnaw at the frontiers of what is humanly knowable, but they're both engaged in the business of making sense of our world and our universe," moderator Karen ní Mheallaigh, classics professor, said in her opening remarks at the Oct. 7 event, "It Became All Space": Physics & Poetry in Dialogue. "But they weren't always separate. In the ancient world, physics and poetry were beautifully intertwined."

With the planned December launch of the James Webb Space Telescope, our horizons will get a lot bigger, ní Mheallaigh added. "Everything we discover, we will need to come to terms with, both as scientists and as humans. The two are inextricable," she said.

Nobel laureate Adam Riess, a Bloomberg Distinguished Professor and Thomas J. Barber Professor of Physics and Astronomy, sat behind a table with former U.K. Poet laureate Andrew Motion, Homewood Professor of the Arts in the Writing Seminars. Before an audience of about 125, Riess noted that the new telescope will allow us to see into the universe 100 times better than what we can see now—the same size leap in understanding that Galileo made with his original instrument. While some believe that science drains the universe's unknowns of their beauty, he said he finds that it doesn't harm the mystery to know a little bit about it.

"Physics and poetry use different languages to gnaw at the frontiers of what is humanly knowable, but they're both engaged in the business of making sense of our world and our universe."
Karen ní Mheallaigh
Johns Hopkins classics professor

"We've moved toward that paradigm," he said, "that what we find and learn is so fascinating that we can appreciate it and understand it on many levels."

Poets are driven by a desire to both affirm what we know, and to explore what we don't, Motion said. "I'm quite sure scientists are driven by similarly ambiguous feelings," he said. "By the need to know where they are and where they haven't arrived yet."

And because our species' actions mean that one day we might be unable to inhabit Earth and need to turn to space as our next home, looking up at the sky still gives us a sense of awe and wonder, but it also gives us a glimpse of what might be our future as we contemplate the evidence of what happened long in the past—the Big Bang.

"In a cosmic scale, that might be a measure of what poetry does—it combines knowledge of the past and experience of the present in order to prove our willingness to engage with the future," Motion said. 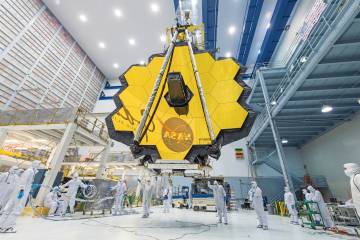 The long-awaited James Webb Space Telescope, scheduled to launch in December, will help astronomers understand the birth, evolution, and future of our universe

First-Year Seminars are part of JHU's reimagination of undergraduate education and will be experienced by all Krieger School first-year undergrads beginning next fall. Part of the initiative's wraparound programming, the event drew undergraduate students, graduate students, faculty members, staff, and personnel from the Space Telescope Science Institute. Their questions inspired the speakers to touch on ideas ranging from every new discovery being part of a long chain of human learning; to the reasons for the existence of dark matter; to whether anyone truly operates in a scientific or artistic domain exclusively; to the ways language is used in precision or more figuratively. Maybe, ní Mheallaigh said, we need metaphor to express the ineffable, and language in turn shapes how we think about the tangible.

"It's the human animal's need for symbolic language in order to understand its own experience of life that potentially represents the bridge between these two disciplines," Motion said.

The event concluded with a brief reading by Motion:

He put his eye to the telescope and the telescope
swallowed him whole although someone was still
holding his hand as he saw men land on the moon
and told him, Think of the dust, then he bent again

to the lens and realised space was a hundred times
deeper than ever and there was God in his gas cave
tugging his beard and saying, Dust is the least of it:
think of the starlight still forming that never arrives.