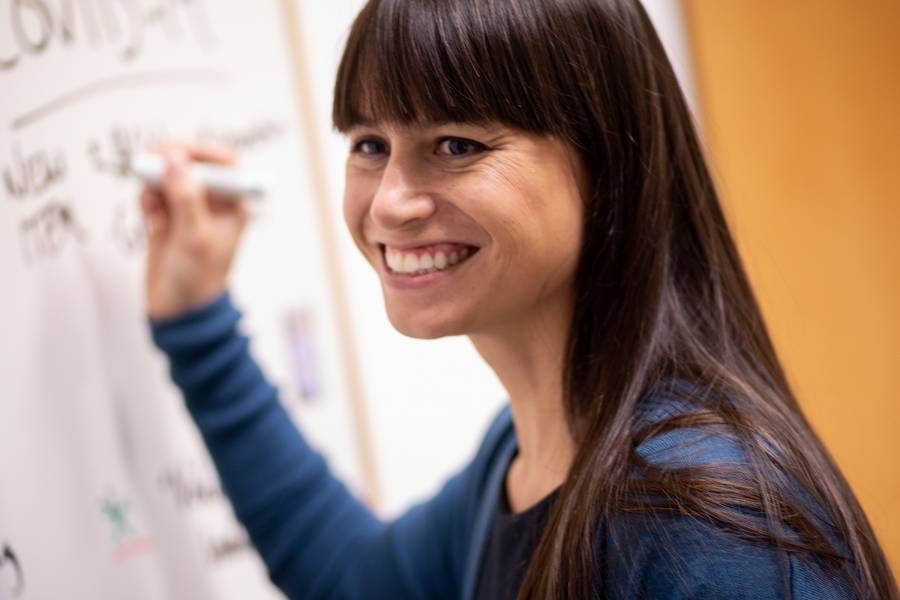 From Olympic swimmer to pandemic responder

Tara Kirk Sell, once one of the world's top swimmers and an Olympic silver medalist, now wages a battle against both COVID-19 spread and the misinformation surrounding the virus

In the spring of 2005, Olympic silver medalist Tara Kirk Sell spent a lot of time thinking about H1N5, a subtype of the avian influenza virus or "bird flu." Not exactly a topic you'd expect one of the world's best swimmers to be spending most of her hours outside of the pool dwelling on, particularly while in the prime of her athletic career.

But her preoccupation with bird flu wasn't just because it was spreading across the globe at the time. Between swimming countless laps during training and competing at the highest level of her sport, Sell (then Kirk) was completing an MA in anthropological sciences at Stanford University. For her thesis, she investigated the bird flu and used it to shine new light on what had transpired during the 1918 flu pandemic that infected 500 million people worldwide and killed an estimated 50 million. And her deadline was fast approaching, with the thesis due shortly after she was scheduled to compete in the Stanford Invitational Grand Prix swim meet in May.

Little did Sell know that her passions for sport and public health would collide nearly two decades later. Today, she's on the world stage again, this time for her expertise in emerging infectious disease and risk communication. Even before the World Health Organization declared a global pandemic, Sell was helping lead the fight against COVID-19.

When Sell first started swimming at the age of 10, she wasn't very good. She took up the sport after she broke her arm in gymnastics and joined her younger sister's club swim team to help with rehab. She wouldn't take the sport seriously until her sophomore year of high school, but by her senior year her potential began to shine through and she landed a spot on the swim team at Stanford, a perennial powerhouse.

Sell had a storied collegiate career between 2000 and 2004, earning a total of 11 NCAA titles, including seven individual crowns. She was the first swimmer to win four consecutive NCAA titles in the 100-yard breaststroke and was undefeated in her 35 races in the discipline. In 2004 alone, she broke the short-course world record in the 100-meter breaststroke—the first in under 58 seconds—and won a silver medal at the 2004 Summer Olympics in Athens as a member of Team USA's medley relay team. She was also awarded the 2003–2004 Honda-Broderick Cup for Collegiate Woman Athlete of the Year.

Put simply, Sell was one of the top breaststrokers in the world, known for her explosive power and natural speed. Out of the pool, her coaches noted that her work ethic and positive attitude made everyone on the team better. 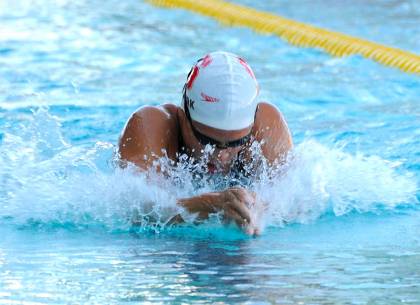 Image caption: Tara Kirk, who earned a silver medal as part of Team USA's 4x100-meter medley relay team at the 2004 Olympics in Athens, competes at a meet in 2008.

When she didn't qualify for the U.S. team for the 2008 Olympics in Beijing—narrowly missing a spot by one one-hundredth of a second—Sell knew her swimming career was ending. The winner of the U.S. Olympic trials event subsequently tested positive for a banned substance and withdrew from the team, but it was too late for Sell to be added to Team USA's roster. "I just had to say I'm going to finish swimming on my own terms, and I'm going to start over," she says. She retired from the sport in 2009.

But start over with what? Sell didn't have the bandwidth to think about life after the pool. All she knew was that she wanted to do something in public health and to have an impact on the world.

Over dinner one night, the father of one of her friends asked about her future plans. Sell told him about "Dark Winter," an exercise that simulated a covert smallpox attack on the United States and was put on by the Center for Health Security, then known as the Johns Hopkins Center for Civilian Biodefense Strategies. She read about it in an undergraduate class called Contagion and Conflict and thought it was "cool." Sell says, "He said, 'Well, I know the people who wrote it. Why don't you ask them what you're going to do with your life?'" She did.

Sell joined the Center for Health Security in 2009 as an analyst. The move made sense, especially given Sell's interest in human biology and anthropological sciences. She was drawn to the multifaceted nature of public health and the need to draw on different disciplines to solve big problems. "Biosecurity and health security occupy a space where it's a cross section of national security and public health, these political, social, and behavioral factors that cross with biology," she says. Plus, working at the center gave her the opportunity to work with legends in the field, such as D.A. Henderson, who had led the worldwide effort to eradicate smallpox and was one of Sell's heroes. 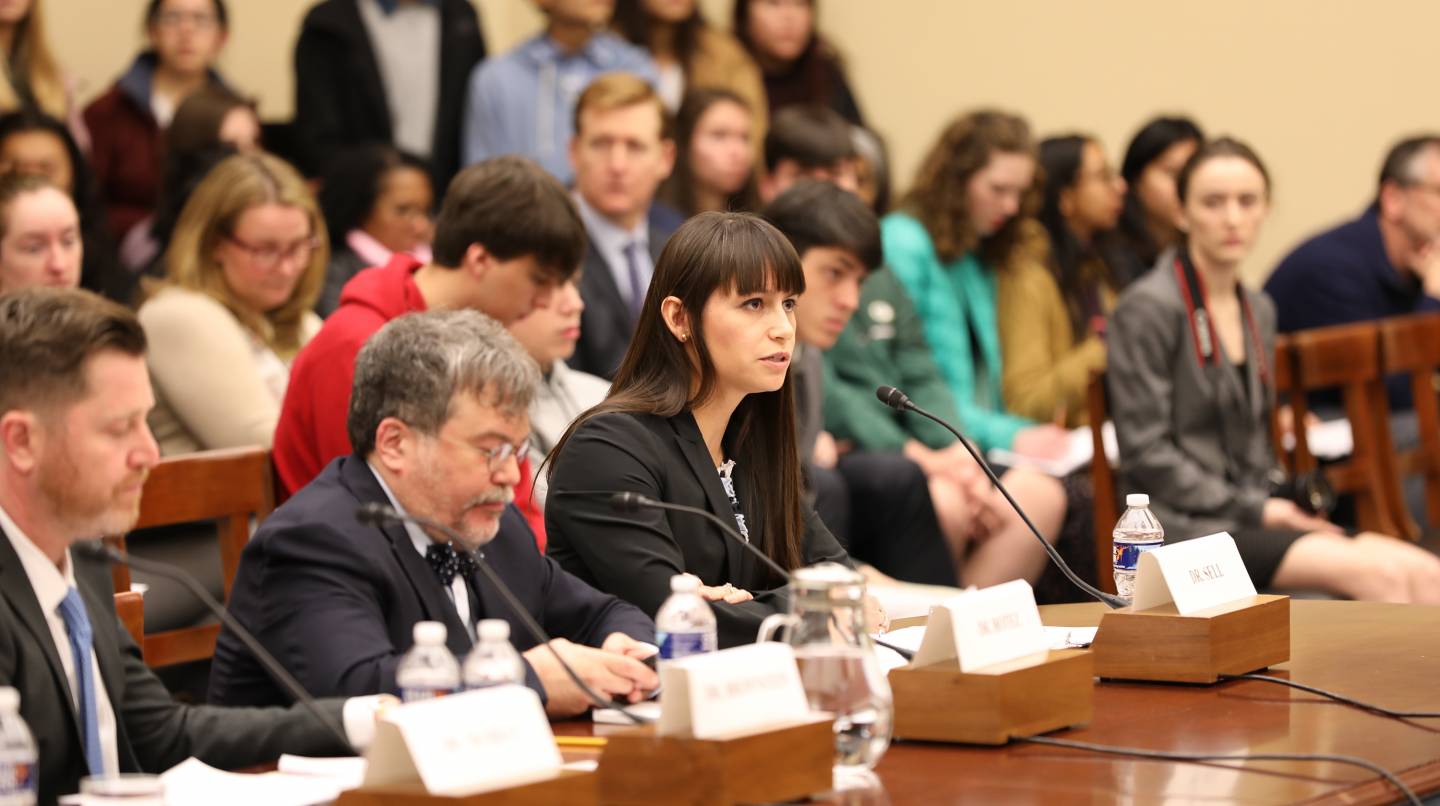 Image caption: Sell provides testimony at a hearing held by the U.S. House of Representatives' Committee on Science, Space, and Technology on March 5, 2020. As the COVID-19 pandemic still gathered momentum in the U.S., Sell provided testimony based on her research on misinformation during infectious disease outbreaks and on using crowd forecasting as a tool for disease prediction.

Still, it was an interesting transition to leave an extremely successful career and start anew on the ground floor. "I did whatever I was told to do," she says, even counting paragraphs in source material to make sure the references in papers were correct. It wasn't glamorous, but that's when the skills Sell had developed as an elite swimmer kicked in. She drew on her ability to grind and her stamina to get the job done. As she gained more experience, she began to advance at the center.

"Tara's an inspiration," says Jennifer Nuzzo, senior scholar at the Center for Health Security and an associate professor at the Bloomberg School of Public Health. "Just think about how much discipline and determination and dedication [Olympians] have to be able to achieve things that few people on the planet will ever be able to achieve. To stay so focused, that takes a really rare and special person."

Similar to the work she started at Stanford, Sell looks at how we've responded in the past to public health emergencies in order to improve how we prepare and respond to situations in the future. She says it's an interest that deepened during her doctoral studies at the Bloomberg School, where she investigated the interplay between the health policy response, media coverage, and messaging during the Ebola outbreak in the mid-2010s. Her research highlighted the role news media plays in determining the salient issues and how people perceive risk during an emerging outbreak. Bottom line: The media messaging that played up the risks of Ebola potentially contributed to increased public concern, more than the situation warranted. She's also identified situations where it's critical for public health officials to step in and lead the messaging.

In particular, Sell's work highlights the significant role of risk communication during public health emergencies, providing relevant, accessible information to help the public understand the health risks and policy responses so that they can make informed decisions to protect themselves, their families, and their communities. While it's at the heart of the center's work, historically, it has been neglected. "People think, well, I communicate every day, why do we need to spend time on this?" Sell says. Often, it's not until we're in the thick of it that people realize the importance of good risk communications.

"Tara has been on the leading edge of calling for that and making sure that [risk communication] is central to all conversations and not just an add-on or an afterthought," Nuzzo says. It needs to be central to the response to public health emergencies, she adds.

"Public health isn't just about getting people who already are on your side more on your side. It's about everyone."
Tara Kirk Sell

That's why when the center ran a prescient exercise about a fictional coronavirus outbreak in October 2019, a quarter of the simulation focused on misinformation and disinformation. Sell knew that if a pandemic were to emerge, separating fact from fiction could be a major concern and an area of weakness in the country's response. She wanted people to think through the problem—its far-reaching implications and management challenges and how to reach populations beyond the echo chamber of those who had already bought into public health measures. "Public health isn't just about getting people who already are on your side more on your side," she says. "It's about everyone."

Since the COVID-19 pandemic began, Sell has been integral to the center's work. She's contributed to projects and research—such as advising K-12 school systems and the faith-based community on reopening and sports leagues on the design of safe sport bubbles—to improve the country's pandemic response. She's a sought-after expert, having testified before Congress and made numerous appearances on television, radio, and podcasts. And she's worked diligently to tamp down misinformation about protective measures like vaccines and masking.

Most recently, Sell's firsthand experience as an Olympian has been invaluable to conversations around the Summer Olympics in Tokyo and the continuing spread of COVID-19. While she didn't think the Zika outbreak should delay the 2016 Rio Olympics, she believes the one-year postponement of the Tokyo Games was necessary. Now that the Games are under way, she's not one of the naysayers. Instead, she draws on what she knows from being an athlete to help her understand what could potentially happen at the Olympics.

Sell says she'll continue to work on improving preparedness and responses to emerging public health emergencies. "I wouldn't work on pandemics if I didn't think they would happen," or will happen again, she says. As part of that work, it's critical to reflect on the lessons from COVID-19—what has worked, what hasn't worked—and use that information to create meaningful policy changes.

After nearly a year and a half of working on COVID-19 and the pandemic response, Sell admits that she's a little burned out. She's buoyed, however, by the enthusiasm of the students she teaches. While her work contributes to policies that lead to incremental change, at times it can feel like a long slog. It's different with students. "I just end the class feeling super pumped up because it feels like, wow, I'm really contributing to these brilliant young professionals who are going to go out and change the world," she says.

True to her aim, Sell is leaving her mark on the world. And as her two worlds and passions meet again in Tokyo, she's keeping tabs on them—how the swimmers perform in the pool and how the officials handle COVID-19, both Olympian efforts.

Correction: The length of the event in which Tara Kirk Sell won four consecutive NCAA titles, the 100-yard breaststroke, was misstated in an earlier version of this article. The Hub regrets the error.