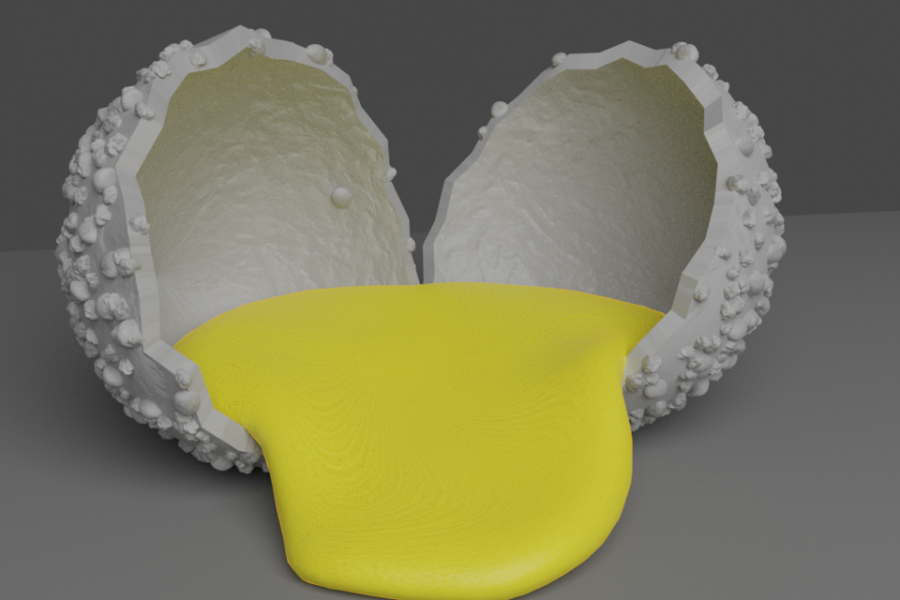 Image caption: A catalyst (to make the adhesive hold quickly) and a crosslinker (to make the hold strong) are housed in a tiny microcapsule akin to an eggshell that breaks apart and releases the additives when pressure is applied.

In the modern world, adhesives are largely considered a solved problem. Even underwater, glues can be used in a wide range of maritime applications.

The thing is, they're just not that effective.

The problem, as researchers at the Johns Hopkins Applied Physics Laboratory saw it, was the slow cure rate of polyurethane. Even the toughest glues struggle to handle interstitial water, and most work best on pretreated surfaces, both of which are challenges in an underwater environment. They also typically take at least 24 hours to properly cure, an obvious problem if what you're trying to glue is submerged.

"You can imagine, in a marine environment, how needing 24 hours to cure and hold at full strength could be an issue," said Reid Messersmith, a chemist in the Research and Exploratory Development Department (REDD) and the lead author on a new paper, titled "Rapid Underwater Adhesive Utilizing Crosslinker and Amine Catalyst-Filled Microcapsules." Their findings were recently published in Applied Polymer Materials, an American Chemical Society publication.

"So, we made it strong and fast," Messersmith continued. "From 24 hours to one minute was our speed increase, and if you can actually let it sit for 24 hours, it'll hold at 10 times the strength."

The team examined ways to improve commercial glue for underwater use and found that adding a catalyst (to make it hold quickly) and a crosslinker (to make the hold strong) to the glue's original formula would enhance it, and it would hold immediately. This doesn't work in practice, though, because there needs to be a slight lag time between when the glue is applied and when it begins to cure, in case you need to stick something else to the glue before it solidifies, for example.

The solution was to house the catalyst and crosslinker in a shell, a microcapsule akin to an eggshell. When you mix the filled shell into the glue, nothing happens. But when a small amount of force is applied, such as rubbing it between your fingers, the shells break, the catalyst and the crosslinker leak out and the glue solidifies immediately.

The result is a rapidly curing underwater adhesive that is effective on a range of surfaces, including aluminum, stainless steel, glass, and plastic. The adhesive performed best on untreated aluminum surfaces with a high bonding strength of approximately 400 pounds in 60 seconds.

"Having a pressure-activated, high-strength adhesive that works in minutes has myriad potential applications," said Chris Hoffman, the project manager in REDD and a co-author on the paper. "Our adhesive works great both in and out of water, so you can imagine using it to repair your boat or reattach shingles. The ease with which our microcapsules can be applied to an existing glue is a significant added bonus."

The key step to making a useful glue additive is washing away unwanted oils and byproducts produced when creating the microcapsules. As detailed in the paper, the team compared two washing methods and found a way to produce a dry, white powder that is easy to handle and shelf stable. This microcapsule powder can simply be mixed into the base resin, and only a small amount of force needs to be applied to rupture the capsules as the two pieces are pressed together. The microcapsules are also produced in a batch method that can be scaled up for commercial production, the researchers concluded in the paper.