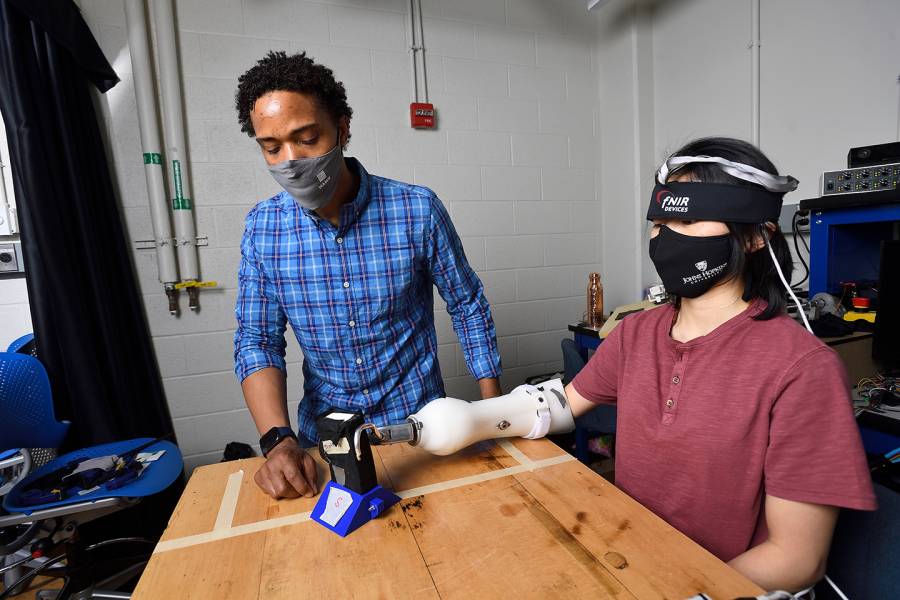 In what researchers are calling the first study of its kind, the cross-institutional team used neuroimaging to investigate if haptic feedback would help people who use prosthetic hands to expend less mental effort while carrying out tasks. The team's findings were published today in IEEE Transactions on Human Machine Systems. 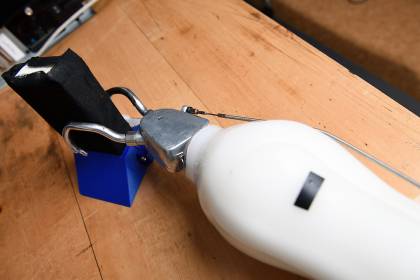 "Studies have shown that adding haptics to prosthetic devices does have benefits, in that sensory information helps the user perform tasks better," says senior author Jeremy D. Brown, an assistant professor of mechanical engineering at Johns Hopkins University's Whiting School of Engineering. "But what hasn't been clear is how haptic feedback affects cognitive processes. Our study provides strong evidence that haptic feedback is beneficial from both a cognitive and task performance perspective."

Prosthetic limbs can improve quality of life for many amputees, but some also report that using them to perform everyday tasks can be challenging. Commercially produced prostheses offer the user limited or no sensory feedback; instead, users rely heavily on visual feedback—carefully observing their own device as they move it—to accurately control their movements.

Having to constantly monitor their prosthetic limb as they use it is mentally fatiguing for some users, causing some to abandon their device altogether. Even so, relatively few studies have been conducted to assess the mental demand placed on individuals as they use prosthetics.

In this study, participants were asked to use a prosthesis to squeeze three blocks that looked identical, but were actually of varying degrees of stiffness, and to identify the stiffest one. They carried out the task using their healthy hand, using a standard prosthesis, and with a prosthesis that provided feedback of grip force through vibrations.

During each task, the researchers measured individual participant's mental effort by way of a neuroimaging technique called functional near infrared spectroscopy, fNIRS, which directly monitored their brain activity. With fNIRS, participants wear portable headgear that measures the time-varying nature of mental effort through changes in blood oxygenation levels in the prefrontal cortex, the part of the brain involved in decision making, planning, and other behavior; the more cognitively demanding a task, the more oxygen is pumped toward the prefrontal cortex.

"FNIRS-based mobile neuroimaging enables continuous measurement of brain function in increasingly realistic settings, and hence allows studying natural cognition with practical applications for everyday life," says Hasan Ayaz, co-senior author on the study, and associate professor and Provost Solutions Fellow at Drexel University's School of Biomedical Engineering, Science and Health Systems. "This study is also a demonstration of the emerging interdisciplinary field of neuroergonomics, which benefits from advances in mobile neuroimaging and can help inform the design of tools, technology, and working environments, including prosthetics."

When comparing cognitive load across the conditions, the team found that participants using their healthy hands performed the best with the least amount of mental effort. Researchers say that this was to be expected, considering that the human hand is equipped with an estimated 17,000 sensory receptors. But when using the prosthesis with integrated haptic feedback, participants performed the task better and recorded a lower cognitive load than did the participants who used a standard prosthesis.

The researchers say that the results demonstrate the potential value of haptic sensory feedback in prostheses, especially if future studies confirm that minimizing cognitive load will maximize usability for prosthetic devices. Brown says future work for his group will focus on applying this method to more complex tasks, and validating these findings with upper-extremity amputees. He believes more insight on haptic feedback and cognitive load will benefit the larger field of human-robot interactions, beyond just prosthetic devices.

The team considers the study a real eye-opener as to just how good the "gold standard" is for prosthetics research—in this case, the natural hand.

The participants were almost perfect with their natural limbs. In many ways, it shows us that haptics does have clear benefits for prostheses, but we still have a long way to go if we are to truly replicate the form and function of what we can do with our natural limbs," said Neha Thomas, lead author of the paper and a graduate student in biomedical engineering.

Other contributors from Brown's lab include Garrett Ung, a robotics master's student and a recent alum of the mechanical engineering undergraduate program. 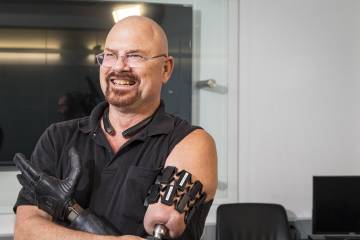 Published March 24, 2021
The milestone demonstrates the functional benefit of the technology for those who have lost limbs, while study findings indicate users gain mastery over the technology the more they use it 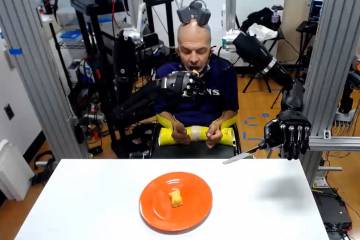 Published Dec 28, 2020
System merging artificial intelligence, robotics, and a brain-machine interface represents major step toward restoring function and autonomy for patients without the full use of their limbs