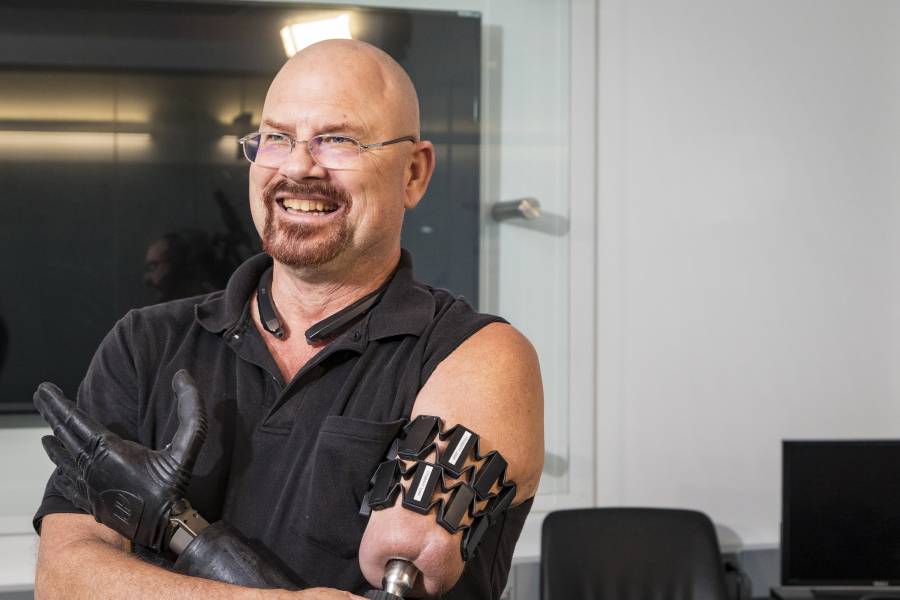 The milestone demonstrates the functional benefit of the technology for those who have lost limbs, while study findings indicate users gain mastery over the technology the more they use it

In 2018, Johnny Matheny became the first person to take home the world's most advanced Modular Prosthetic Limb—developed by the Johns Hopkins Applied Physics Laboratory—for a yearlong opportunity to determine how the arm functions in the real world.

Researchers captured the observations and lessons learned from that trial in an article, published recently in the Journal of Neural Engineering, along with two videos demonstrating Matheny's mastery of the device.

"This work demonstrates, in a single participant, the functional benefit of unconstrained use of a highly anthropomorphic prosthetic limb over an extended period," writes lead author Luke Osborn, a researcher in APL's Research and Exploratory Development Department. "While hurdles remain for widespread use … this study offers insight as an example of the impact of advanced prosthesis technology for rehabilitation outside the laboratory."

Since the Revolutionizing Prosthetics Program began in 2005, several patients, including Matheny, have been enlisted to test the limb, enabling APL researchers to improve and further refine the system. "This study was an important milestone, though, because it was the first time someone was able to use the MPL in their personal environment," said Bobby Armiger, the project manager for the study. "He was able customize the arm and learn to do the things he wanted—like playing the piano."

Florida resident Matheny lost his left arm to cancer in 2007. He has used several other prosthetic devices since then, though none as advanced as the MPL.

"One challenge with many current prosthetic arms is that they are often hard to control, unreliable, or don't offer the functionality needed by the user," Osborn explained. "A lot of great research progress has been made in improving prosthesis technology, but it is difficult to fully evaluate its effectiveness beyond controlled laboratory or clinical settings."

Researchers monitored Matheny's at-home use of the MPL, which he controlled through signals detected by electromyography from his amputated limb that then command and move the prosthesis.

"What this proves is that an advanced arm like the MPL has the potential to improve prosthesis control accuracy and efficiency over time, even in an extremely experienced user."
Luke Osborn
Research and Exploratory Development Department

"He was able to customize the MPL to perform movements, including controlling individual fingers, which is something his conventional prosthesis was unable to do," Osborn said. "Although Johnny is an extremely experienced and proficient myoelectric prosthesis user, as he continuously used the MPL more over time during the take-home study, we saw gradual improvements in his ability to generate complex gestures with the prosthesis using his myoelectric signals."

More importantly, Osborn noted, Matheny also became more efficient in controlling the MPL. This meant the myoelectric signals he produced became smaller and less variable over time, a surprise to researchers given how experienced Matheny already was.

"What this proves is that an advanced arm like the MPL has the potential to improve prosthesis control accuracy and efficiency over time, even in an extremely experienced user," Osborn said.

Following the success of this first MPL take-home study, an additional participant brought the MPL home and used it for several months, another important step in furthering the technology.

"Each user is going to have very different demands for what the arm should do for them, so each study presents new insights on how to further improve the technology to restore lost function," said Courtney Moran, a certified prosthetic clinician in APL's Asymmetric Operations Sector who has worked with most of the patients involved in the testing and refinement of the MPL.

"There are still of lot of exciting and important challenges to be addressed that our team is investigating," Osborn said. "Understanding how prosthesis users interact with their environment, outside of the clinic or laboratory, will help lead to the design and development of more sophisticated performance measures that will be important metrics for tracking functional improvements over time."