Uncovering the mysteries of cell proteins

In her lab at Johns Hopkins, biophysicist Karen Fleming investigates how proteins fold, interact, and mutate

Human cells are full of proteins, which do everything from providing structure, to transporting molecules to new locations, to catalyzing the reactions that allow cells to divide and grow. Scientists know that proteins pull off these feats by folding, but they still have a lot to learn about exactly how that works. Understanding those processes would yield important information about life itself; if proteins don't fold correctly, the cell doesn't function properly. 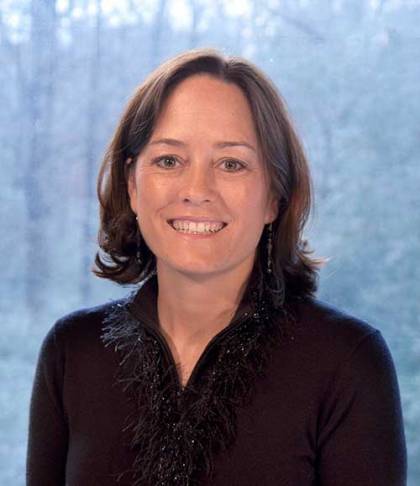 "The strength we offer as a lab is that we use both experiments and computation," Fleming says of her group—four graduate students, one undergrad, and one research scientist. "We use computation to explain experiments but also to predict new experimental results, and then we do experiments and see how that turned out. And that's really a useful method for thinking about your data in a broader context."

Over time, Fleming's group has quadrupled the number of known water-to-bilayer membrane protein stabilities, showed that the membrane itself plays a catalytic role in folding, and defined that the key function of a particular protein complex is an enzyme, among other major contributions. Internationally recognized for those contributions, Fleming was awarded The Protein Society's 2020 Carl Brändén Award, which honors an outstanding protein scientist who has also made exceptional contributions in the areas of education and/or service; and is serving as a 2020-21 Phi Beta Kappa Visiting Scholar—one of a cohort of selected distinguished scholars who visit colleges and universities with chapters of Phi Beta Kappa, meeting informally with students and faculty members, taking part in classroom discussions, and giving a public lecture.

It's the nature of basic science to concern itself with understanding in the broad sense, not to focus on how the understanding might be applied, but Fleming and her lab members acknowledge that their findings might have relevance for an area like antibiotic resistance. After all, the brand-new mRNA vaccines against COVID-19 rely on decades of basic research by scientists who never imagined where their discoveries might lead.

In Fleming's lab, members clone proteins, make mutants, express the proteins, and purify them with protein chemistry. They use fluorescent spectroscopy to observe their structures, and sedimentation velocity to measure their hydrodynamic shapes. They also bring the proteins to the National Institute of Standards and Technology, where small angle neutron scattering sheds additional light on their shape. 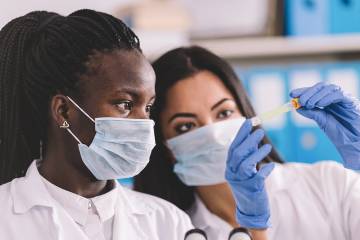 Once they've built a body of knowledge in one type of membrane protein, they try applying those findings to another, and another. If the findings continue to hold up, they consider them a general discovery for all membrane proteins.

What have they learned about how proteins function? Bacteria sort their outer membrane proteins through a kind of trial and error process, Fleming says, passing them around until the right shapes are in the right locations in what she describes as a game of "microbial hot potato."

"Catch and toss steps are very quick, and the instantaneous bound lifetimes are short, much like the catch and toss of a hot potato," Fleming says. "Computer modeling of this process explains how this biological network functions and highlights the integration of scientific disciplines ranging from microbial genetics to detailed biophysics." 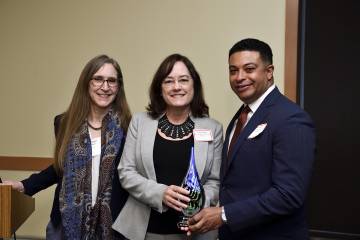 Published May 16, 2019
She received the annual Provost's Prize for Faculty Excellence in Diversity for her efforts to support gender equity in STEM fields