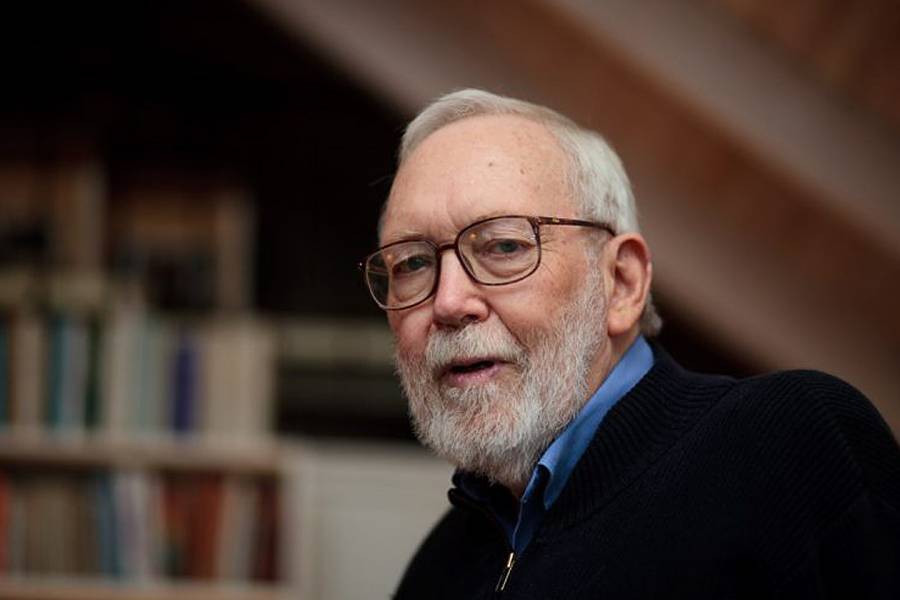 J. Hillis Miller, among the most distinguished literary critics and theorists and a 19-year professor in the Krieger School's Department of English, died February 7 at his home in Sedgwick, Maine. He was 92.

Part of the Yale School of the literary deconstruction movement, Miller helped revolutionize the study of literature. In dozens of books, he shaped ideas about rhetoric and fiction, literature and ethics, and the ways that texts can and cannot say what they mean.

Critics of deconstruction—which held that words and texts only have meaning in relation to other words and texts—worried about the implications of the premise that texts had no inherent meaning. In contrast, Miller maintained that rather than stripping texts of purpose, the interpretation freed readers to experience all possible meanings, making literature a "place of joy."

Known as a genial colleague, a legendary teacher and mentor, and a clear writer, Miller started out as a scholar of Victorian literature but soon expanded to address a range of British and American prose and poetry, using deconstruction to analyze the relationship between text and its associated meaning. His work aligned with prominent scholars and fellow Yale School members Paul de Man, Jacques Derrida, Geoffrey Hartman, and Harold Bloom. By occasionally publishing articles in nonacademic magazines, he made deconstruction more widely accessible.

"I first encountered Hillis Miller when I was a graduate student," remembers Sharon Cameron, the William R. Kenan Jr. Professor Emerita in the Department of English. "I had submitted an essay to ELH, a journal still put out by the Johns Hopkins English Department, where he was one of the editors. When my essay was rejected, I took issue with the decision and resubmitted it without comment about the earlier judgment, where it was reassigned to Hillis who accepted it—thus instancing the contingency and occasional serendipity of such verdicts. Subsequently, in my first job at Boston University I taught a student named Matthew Miller whose undergraduate thesis on Wallace Stevens argued strenuously with a particular critic, Hillis Miller. It was a while before I realized Matthew was arguing with his father. Hillis' response to both episodes, when he learned of them, was mild benignity. I valued Hillis as much for his even-keel kindness as for his sweeping examinations of literary and philosophical texts. In temperament, he had none of the sharp edges that rendered his deconstructionist colleagues personally daunting."

Miller's career began in 1953 at Johns Hopkins, where he worked with the Geneva School of criticism and colleague Georges Poulet to develop a "phenomenological criticism" focused on "the consciousness of the consciousness of another." While at Hopkins, he met Paul de Man and Jacques Derrida. Named full professor in 1963, he served as department chair from 1964 to 1968. In 1972, he moved to Yale, where he remained until moving in 1986 to the University of California, Irvine, where he served as Distinguished Professor and where Derrida later joined him. He was named emeritus in 2001 but continued to author books and articles, lecture nationally and internationally, and supervise doctoral theses.

Born in Newport News, Virginia, Miller earned a bachelor's degree at Oberlin College in 1948 after switching majors from physics to English. He earned a doctorate at Harvard in 1952. Miller was a senior member of the editorial board of Hopkins' quarterly literary journal ELH from 1955 through 2021. He served as president of the Modern Language Association in 1986 and received the organization's lifetime achievement award in 2005.