Paul R. Olson, professor emeritus in the Department of Modern Languages and Literatures, died last week. He was 95.

Renowned for his scholarship and teaching of Spanish literature, Olson spent 30 years at Johns Hopkins, researching and writing about medieval Spanish and Italian literature, linguistics, 20th-century Spanish poetry, and the works of Miguel de Unamuno. He arrived in 1961 as assistant professor of modern Spanish literature, and became associate professor in 1963 and professor in 1967, serving for a time as chair of the Department of German and Romance Languages and Literatures, as it was then known. He was named emeritus in 1991. 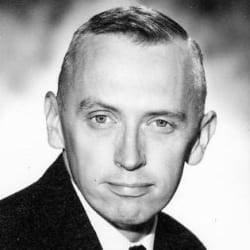 "When I was hired into the then-Department of Romance Languages 42 years ago, Paul Olson was the chair of the department as well as the head of Spanish," says Wilda Anderson, interim chair of the Department of Modern Languages and Literatures. "He was a distinguished scholar of 19th- and early 20th-century peninsular Spanish literature and a fine teacher, graceful in class and much appreciated by his students both undergraduate and graduate for the clarity of his exposition and for his genuine kindness and interest in their work. He was a remarkable chair of a complex department, adept at communication, with an understated but wry sense of irony that broke down tensions and created a sense of community. He presided well; to such an extent that a famous visiting French philosopher called him 'le Président Olson.' We will miss his serene presence very much."

Olson's two books—Circle of Paradox: Time and Essence in the Poetry of Juan Ramón Jimenez and The Great Chiasmus: Word and Flesh in the Novels of Unamuno—made him the leading authority on those two writers, says former colleague Eduardo González, professor of Spanish in the Department of Modern Languages and Literatures.

"The books were impeccable, rigorous, and elegantly written," González says. "He was exacting in the way he approached language. He was a very learned man, and very modest."

Olson was a Guggenheim Fellow, Fulbright grantee, and American Council of Learned Societies grantee, and was a member of the Modern Language Association, Association International Hispanistas, and National Association of Scholars.