Peter Privalov, father of the field of biological microcalorimetry, dies at 88

The longtime Hopkins research professor, who joined the university in 1991, laid the theoretical groundwork and developed the technology for measuring the heat released during protein folding within a cell

Peter Privalov, research professor in the Department of Biology at the Johns Hopkins Krieger School of Arts and Sciences and a founding father of the field of biological microcalorimetry, died of lymphoma on Sunday, Dec. 20. He was 88.

Throughout his career, Privalov focused on the physical principles of the architecture of biological macromolecules: proteins, nucleic acids, and their complexes. Specifically, he studied the energetics of formation of their three-dimensional structures, which are the forces stabilizing their structure, the mechanism of cooperation of these forces, and their interaction with the surrounding media of water or lipids. 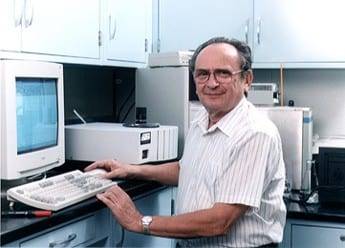 "Peter was a pioneer in the study of protein thermodynamics, and his work was foundational," says Vince Hilser, professor and chair of the Department of Biology. "In 1964, his group developed the first differential scanning calorimeter to study the energetics of proteins and nucleic acids, essentially founding the field of biological microcalorimetry. Since that time he has played a major role in advancing the technology and developing the ideas girding our current understanding of protein energetics. It is hard to overestimate his contributions."

Having become convinced that it was possible to measure the very small amount of heat released during the folding of a protein, Privalov developed a supersensitive calorimetric technique, microcalorimetry, which continues to be widely used in many laboratories. For almost five decades, he played a major role in advancing microcalorimeters and in developing the ideas behind the current understanding of protein energetics.

"This methodology found wide applications in studies of the specificities and energetics on interactions between various biological macromolecules as well as their binding and modulation of their properties by small molecular effectors; it has become an essential and widely used approach in biomedicine and analytical chemistry worldwide," says Evangelos Moudrianakis, a professor in the Department of Biology. "Over the years that followed the use of Peter's new DSCs, volumes of data were generated worldwide describing the thermodynamics of protein unfolding. None of the theories produced to interpret all these would have existed if it hadn't been for Privalov's pioneering engineering and scientific contributions."

Adds Ernesto Freire, Henry Walters Professor in the Department of Biology: "Our current understanding of the nature and magnitude of the forces that determine the structural integrity of proteins and other biological macromolecules is due to a large extent to the pioneering research of Peter Privalov. Back in the 1960s, Professor Privalov understood that the only way to measure those forces required high sensitivity differential scanning calorimeters, instruments that were not available in those days."

Born in Georgia, Russia, Privalov began his career in the former Soviet Union but gained worldwide recognition for his discoveries and scientific breakthroughs, Freire says.

"When he came to Hopkins, he continued with his efforts to develop a better understanding of the thermodynamics of macromolecular structure and their interactions," Freire says. "Simultaneously, he continued working in the development of ever more powerful and sensitive instrumentation, a task at which he greatly succeeded. His passing is a great loss for the scientific community in general and Hopkins in particular."

Privalov came to Johns Hopkins in 1991 to create, with Freire, the NIH-sponsored Biocalorimetry Center. Known for his kindness as well as his innovation, he served as professor of biology and biophysics, becoming research professor in 2011. Before that, he served as head of the Laboratory of Thermodynamics (1966-1991) and professor (1984-1991) at the Institute of Protein Research in Moscow, where he was also a member of the Russian Academy of Sciences. He authored or co-authored 230 papers.

Privalov earned a master's degree and PhD in physics at Tbilisi University in Georgia, Russia, in 1956 and 1964, respectively, and a DSc in biophysics at the Institute of Biophysics in Moscow in 1971. Awards include the AICAT-SETERAM Award for Outstanding Contribution to the Thermodynamics of Biomacromolecules and the Julian Sturtevant Award for Services to Experimental Thermodynamics, both in 2006; the Christensen Memorial Award and the Huffman Memorial Award of the Calorimetry Conference in 2004 and 1996, respectively; and the Alexander von Humboldt Research Award in 1989.