Gott, who spent 50 years at the Johns Hopkins School of Medicine and was a pioneer of the field of cardiac surgery, is remembered for his humility and civility

Internationally renowned surgeon Vincent L. Gott, former chief of the cardiac surgery division and longtime faculty member of the Johns Hopkins School of Medicine's Department of Surgery, died Nov. 20 of heart failure at his home in Charlottesville, Virginia. He was 93.

Gott was a pioneer in the field of cardiac surgery. He was the first to perform experiments proving that an electronic stimulator could jump-start the heartbeats of patients, a discovery that led to the development of modern pacemakers, which he also had a hand in creating. He revolutionized heart valve designs, performed the first heart transplant operation at Johns Hopkins Hospital, and perfected operational procedures for correcting congenital heart defects in patients with Marfan syndrome. His leadership helped transform the School of Medicine's cardiac surgery division into one of the premier programs in the world.

Despite these great achievements, he is remembered by his friends, colleagues, and trainees as one of the humblest men they knew.

"He did not broadcast his achievements, although they were many," said retired cardiologist Stephen Achuff, who worked alongside Gott for several decades. "He always said 'we,' he never said 'I.' I don't know if he knew how to use the first-person personal pronoun," he added with a laugh. 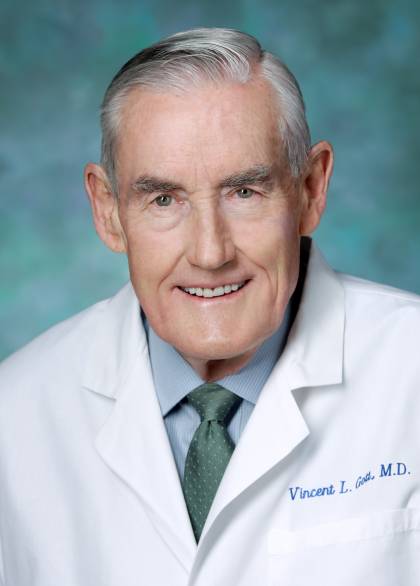 Added Reed Riley, an assistant professor of medicine who knew Gott personally for more than 50 years: "Dr. Gott was a kind and straightforward man. He was principled and treated everybody—senators, kids, residents, maintenance men—with generosity, respect, and kindness. He dignified our hospital with his presence. He was a boy from Kansas, and to his credit the decency he got in his upbringing never left him."

During his more than 50 years on the faculty at Johns Hopkins, Gott trained more than 60 cardiac surgeons, many of whom would go on to become national leaders in their field. He was a devoted mentor who sought opportunities for his trainees and younger colleagues to establish themselves.

For example, although Gott had spent years collaborating extensively with renowned Sinai Hospital physician Michel Mirowski on the creation and testing of an automatic implantable cardioverter-defibrillator, Gott declined to perform the landmark surgery that would be the first to implant the device permanently in a patient. Instead, he invited a young doctor who had graduated from his surgical training just a few months prior to perform the procedure. His name was Levi Watkins Jr., and he would go on to have an internationally celebrated career as a leading cardiac surgeon in his own right.

"Dr. Gott, with typical modesty and devotion to his trainees, stepped aside from what by rights should have been his own operation," Achuff recalled. "From that day forward, he always paid tribute to Levi—whose brilliant career was launched as a result."

"Vince was really a man for all seasons—he was an incredible clinical surgeon, an amazing innovator, and he was gracious, compassionate, and a model of civility. When you think of Vince, a smile comes on your face."
William Baumgartner

That generosity and humility set the tone for Gott's colleagues and trainees, as well. Surgery can be a competitive field—"cutthroat" in some schools, Achuff said. Not so at Hopkins under Gott's leadership. As the chief cardiac surgeon for Johns Hopkins Hospital from his arrival in 1965 until 1982, Gott cultivated a collegial atmosphere for the Cardiac Surgery Division—a collaborative environment that persists today.

Gott was also beloved by his many patients. He was not only devoted to them, Achuff said, but they were devoted to him. In the 1970s, Gott became an expert in treating potentially deadly aortic aneurysms caused by Marfan syndrome, an inherited disorder that affects the body's connective tissue, blood vessels, and other organs. Between 1976 and 1999, Gott performed nearly 200 operations to repair or replace defective aortas in patients with Marfan syndrome and became internationally renowned for these operations.

"It is an understatement and does not do enough justice to him for me to say that I owe my life to him, and my family and I will always be grateful," wrote one former Marfan syndrome surgical patient of Gott's in a public online memorial.

Gott's other contributions to the field of cardiac medicine include what became known as the Gott shunt, which was used—prior to the application of the heart-lung machine—for repairing thoracic aneurysms. He was pivotal in developing early prototypes of the modern pacemaker, and was even invited to purchase shares of the fledgling Medtronic company, which was founded as a result of his experiments and research. The company is now among the world's largest medical device manufacturers.

Outside the operating room, Gott was an avid rock climber, cyclist, and sailor, as well as a talented artist. In the decades before electronic medical records, Gott was known to keep index cards of all his patients and notes from their operations for his own records, as well as hand-drawn sketches of their blood vessels. Fellow surgeons and patients alike benefited from these detailed notes and could call on Gott to learn about the procedures he performed, even years later.

That passion for art led Gott and William Baumgartner, a longtime colleague of Gott's who held a professorship endowed in Gott's honor, to collaborate on a self-published illustrated history of open-heart surgery, titled Mending the Heart: A Pictorial History of Open-Heart Surgery.

"Vince was really a man for all seasons—he was an incredible clinical surgeon, an amazing innovator, and he was gracious, compassionate, and a model of civility," Baumgartner said. "When you think of Vince, a smile comes on your face."

Born in Wichita, Kansas, in 1927, Gott received his medical degree from Yale University School of Medicine. As a medical intern at the University of Minnesota in 1954, Gott was invited to observe the internationally distinguished surgeon C. Walton Lillehei, who is widely considered the "father of open-heart surgery," as he repaired a congenital heart defect on a patient using a technique called cross-circulation. Gott later sketched an operative procedural drawing of the surgery and added it to the patient's record. The skill and detail of the sketch so impressed Lillehei that he invited Gott to join his research laboratory.

"There really were no other surgeons in the world doing open-heart surgery at that time," Gott said during a 1997 interview with William Stoney at Vanderbilt University. "I wouldn't be sitting here today if I hadn't been there in that operating room in March of 1954."

He joined Johns Hopkins in 1965 as an associate professor of surgery for the School of Medicine and cardiac surgeon-in-charge for Johns Hopkins Hospital. He served as chief cardiac surgeon until 1982 and retired from performing operations in 1994. He remained active as co-director of the Broccoli Center for Aortic Diseases and continued seeing patients. He retired in 2008 and was appointed professor emeritus of surgery that year.

During his career, Gott served as president of the Society of Thoracic Surgeons and the American Society for Artificial Internal Organs. He received the American Medical Association's Ludvig Hektoen Gold Medal for outstanding scientific research and the Antoine Marfan Award from the National Marfan Foundation. He also received a Lifetime Achievement Award from the Lillehei Heart Institute for his "seminal contributions to the development of open-heart surgery."

The Vincent L. Gott Professorship was endowed in 2000 with funds provided by friends, colleagues, and patients of Gott's. Baumgartner held the professorship until his retirement in 2019.

Gott is survived by his wife of 66 years, Iveagh; his three children and their spouses; and five grandchildren.

In lieu of flowers, donations can be made to the Vincent L. Gott, MD Professorship. Checks payable to Johns Hopkins Medicine with "Vincent Gott Professorship" in the memo line may be mailed to: Johns Hopkins at Keswick, Office of Advancement Services, Attn: RevMgmt—Heart and Vascular Institute, 3910 Keswick Road, Suite N2100, Baltimore, MD, 21211. Contributions can also be made online by credit card.