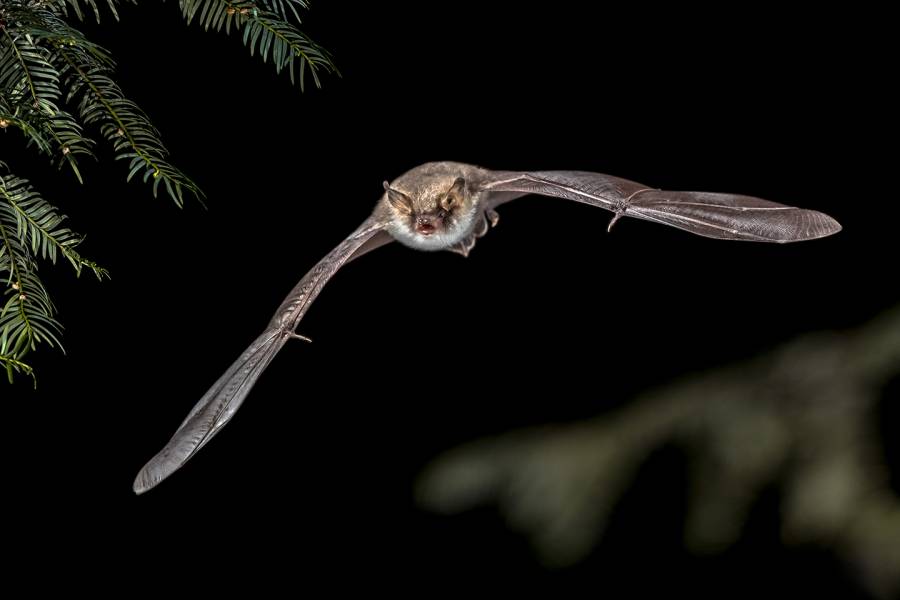 Johns Hopkins researchers discover that bats can use echolocation to predict where their prey is headed, providing new insights about how sound can be used to "see"

They can't tell fortunes and they're useless with the stock market, but bats are quite skilled at predicting one thing: where to find dinner.

Bats calculate where their prey is headed by building on-the-fly predictive models of target motion from echoes, according to Johns Hopkins University researchers. The models are so robust, bats can continue to track prey even when it temporarily vanishes behind echo-blocking obstacles like trees.

Although predicting object motion paths through vision has been extensively studied, these findings, published today in the journal PNAS, are the first to examine the comparable process in hearing. The work enhances the understanding of auditory-guided behaviors in animals and humans, including sight-impaired people who listen to sounds to track objects in their surroundings.

"Just the way a tennis player needs to find out when and where they will hit the ball, a bat needs to anticipate when and where it will make contact with the insect it's hunting," said senior author Cynthia F. Moss, a neuroscientist and professor in the Krieger School of Arts and Sciences. "The insect is flying. The bat is also flying. In this very rapidly changing environment, if the bat were to just rely on the information it got from the most recent echo, it would miss the insect."

Image caption: Researchers tracked the bats' head movements while tracking insects with echolocation to determine their ability to predict where the insects moved.

The bat uses the time delay between each echolocation call and the resulting echoes to determine how far away prey is. They tilt their heads to catch the changing intensity of echoes to figure out where the prey is in the horizontal plane. Bats must put together echo information about object distance and direction to successfully track an erratically moving insect.

But because bats are such good hunters, the research team thought that in addition, the bats must also be somehow using this information to predict where their prey is headed. To test this in the lab, they designed an experiment that closely mirrored the situation of a bat hunting in the wild.

They trained bats to stay on a perch and track insects. The team recorded the bat's echolocation calls and head movements as they changed where the insects moved and how quickly. They also added obstacles that interrupted the echoes.

"We devised mathematical models to test the data and we came up with different hypotheses of what the bats could be doing," said co-first author Clarice Anna Diebold, a doctoral candidate in the Department of Psychological and Brain Sciences.

"Just the way a tennis player needs to find out when and where they will hit the ball, a bat needs to anticipate when and where it will make contact with the insect it's hunting"
Cynthia F. Moss
Senior author

If that bat wasn't predicting where the insect would be, its head movements would always lag behind the target. But that wasn't the case. If the bat kept his head in a fixed position, which sometimes reflected where the insect ended up, that would eliminate the prediction theory. But that wasn't happening either. And if the bat was only using information from the echoes to estimate velocity, that wouldn't be enough to explain the extent of the bat's precision.

"We hypothesized that bats use both the velocity information from the timing of the echoes and further adjust their head aim," said co-first author Angeles Salles, a postdoctoral fellow. "When we tested this model with our data, we saw it fit very well."

The findings upend the accepted notion that bats do not predict an insect's future position—a conclusion largely drawn from a 1980s study done before high-speed video was widely available.

"The question of prediction is important because an animal must plan ahead to decide what it's going to do next," Salles said. "A visual animal or a human has a stream of information coming in, but for bats it's remarkable because they're doing this with only brief acoustic snapshots."

Although bats are studied here, the findings apply to any animals that track moving sounds, and even to people, like the blind, who use clicks and cane taps to help them navigate while avoiding obstacles.

Published Oct 30, 2020
Researchers are conducting a study to examine the mechanisms in the brain that mediate pain