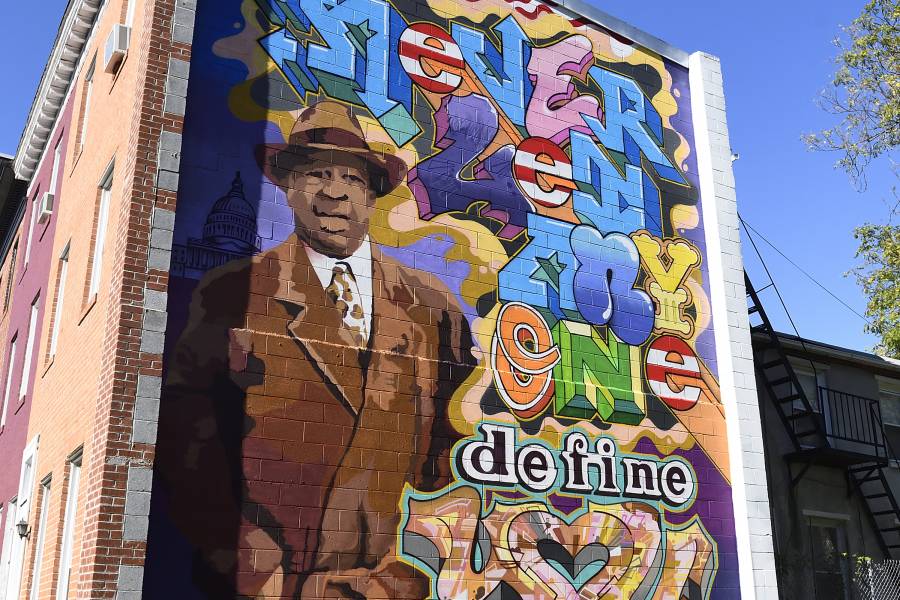 "Never let anyone define you." It was a favorite phrase of U.S. Rep. Elijah Cummings, who died a year ago, and it is now immortalized in a mural celebrating the longtime congressman in West Baltimore.

The phrase could also describe the path the mural and its creator took to that brick wall beside historic Union Baptist Church on Druid Hill Avenue. Graffiti art can be a tough sell for people accustomed to more traditional forms, but after months of discussions about design and location possibilities, the Upton Planning Community—a consortium of seven nearby neighborhood associations—endorsed the project and its creator, graffiti writer and muralist Adam Stab, who, since January, has held the artist-in-residence fellowship at the Billie Holiday Project for Liberation Arts at the Johns Hopkins Krieger School of Arts and Sciences.

On Oct. 17, the anniversary of Cummings' death, an outdoor unveiling was attended by many of those who had helped guide the project as well as dignitaries and members of the Cummings family. Attendees included U.S. Rep. Kweisi Mfume, Kurt Schmoke, civil rights organizer and lawyer Larry Gibson, and Maya Rockeymoore Cummings, the late Congressman's widow.

"We were delighted to share our work with the community that is important to us (and to distribute cloth face coverings)," says Lawrence Jackson, Bloomberg Distinguished Professor of history and English and the Billie Holiday Project's founding director. "We have been devastated, like everyone else, by the pandemic. Returning to Druid Hill Avenue and historic Union Baptist Church, and sponsoring Adam Stab's mural in homage of Cummings, was absolutely gratifying. We are back in the field conducting our reparative and cross-fertilizing work. Our goal is to rehabilitate a historic building and operate our programming from the historic Druid Hill Avenue corridor." 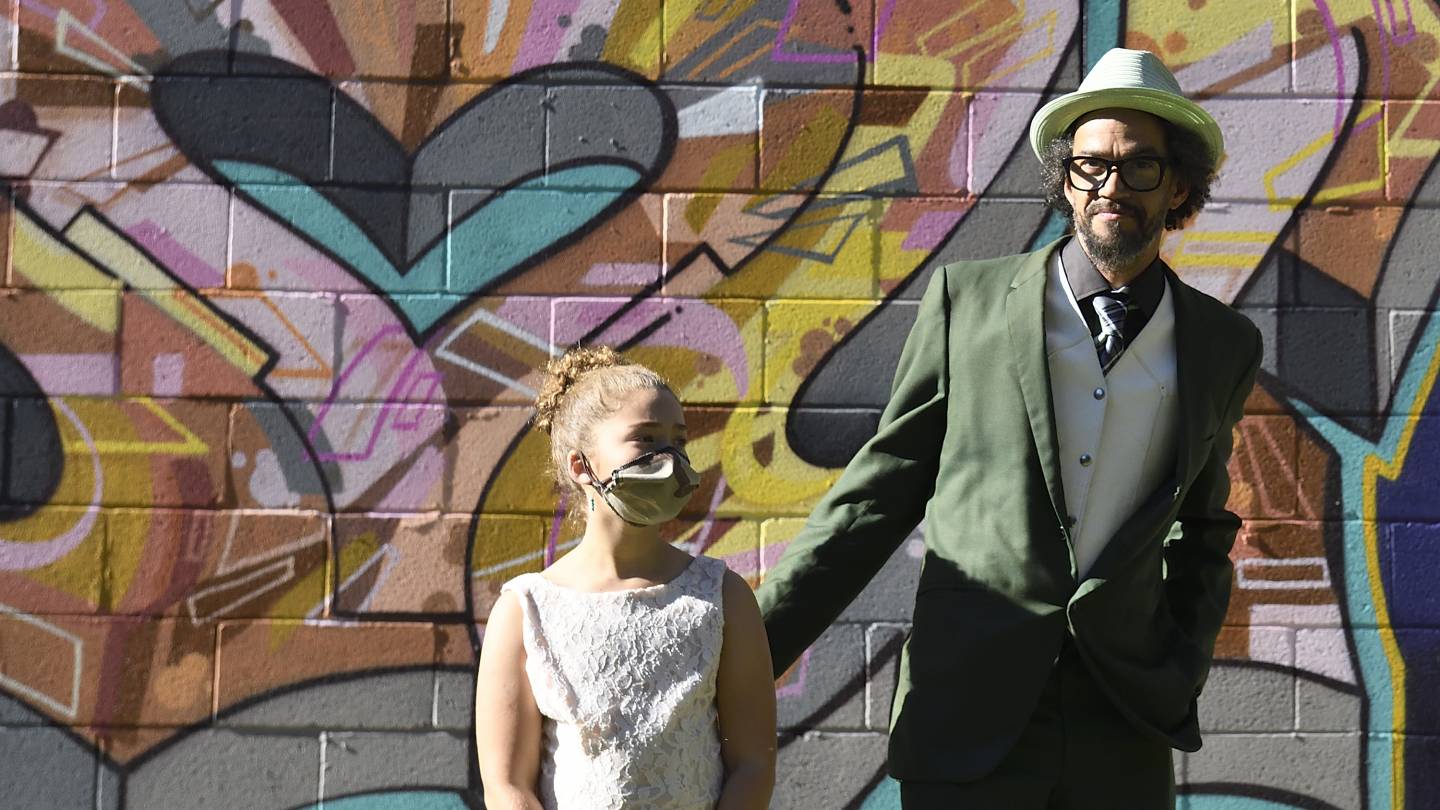 The artist-in-residence program is one prong of the Billie Holiday Project, which was founded in 2017 to document and disseminate the history of African American life in Baltimore and to build links between the university and the historic "inner city." The artist-in-residence holds graffiti arts workshops with Hopkins students through the Center for Visual Arts, as well as community workshops on Pennsylvania Avenue with partner Jubilee Arts. When COVID-19 arrived, plans had to shift, though both the painting and the community engagement endured.

Other Billie Holiday Project initiatives include a speaker series that brought scholarly conversations into churches and held workshops for church historians to strengthen their skills as archival stewards. The goal of the series was to build trust and reciprocity between the churches and university, says Kali-Ahset Amen, assistant research professor of sociology and the project's managing director.

"Often, when outsiders come in promising improvement without the buy-in and consultation of the community, it's not only problematic, but reproduces power imbalances that have historically existed between the communities of Baltimore and Hopkins."
Kali-Ahset Amen
Assistant research professor

Reciprocity is also key to another of the project's prongs, embodied in a community-based research course that Amen teaches each spring that she co-designed with members of the Upton neighborhood group. Last spring, students produced a paper on the sustainability of Black businesses on Pennsylvania Avenue, and Amen plans to continue to collaborate with Upton on student-led, community-based studies.

"The goal is not to create an intellectual agenda for them, but in the spirit of reciprocity to ask what data would be helpful in advancing your policy agenda, and how can we deploy the human resources of Johns Hopkins to support that agenda?" Amen says. "It's important reparative work."

So when the time came to design and place the mural, the Billie Holiday Project team leveraged its existing partnerships with community organizations, collaborating with Union Baptist and its pastor, Rev. Alvin C. Hathaway Sr., and the nearby neighborhood associations. "With a mural, we're making a big intervention in the visual landscape," Amen notes. "Often, when outsiders come in promising improvement without the buy-in and consultation of the community, it's not only problematic, but reproduces power imbalances that have historically existed between the communities of Baltimore and Hopkins. We could not be part of that."

The selection of the highly accomplished Stab as visiting artist intentionally pushed some boundaries. "How do we bring in folks who are artistic geniuses, but whose aesthetic and creative process derive from an underground and outsider culture that many in the Black community may not be willing to accept?" Amen asks. The only parameters the project placed on the art Stab created were that it must be relevant to Baltimore and accepted by the community. Stab's suggestion to honor Cummings, who represented a large portion of Baltimore in Congress since 1996 and advocated against oppression, spoke to the neighborhood leaders' civil rights roots and allowed Stab to integrate past and present through a melding of styles.

"It's an intergenerational dialogue as much as it is a university-community dialogue," Amen says. "The reason the mural is so successful in satisfying different kinds of stakeholders and adding to and enriching the landscape is that it's a great representation of a kind of encounter between old and new representational styles: The abstraction of graffiti art and style writing, and the figurative art or realism of the traditional mural."

The evening before the unveiling, Stab gave a public lecture on the origins and evolution of graffiti art in Baltimore and the life of the street artist. The final stage in Stab's residency will be an oral history project to generate a small collection of life narratives of Baltimore street artists from the 1980s to the present.

With the mural in place, Amen says Union Baptist plans to bring new life to the unused green space it overlooks, installing an ornamental fence and a reflective meditation area. "The green space, on the left of the church, is the site of a demolished building that was a halfway house, and to the right is a Head Start school readiness program facility," Amen says. "Think what all of that says in terms of the composition of the block and the needs those spaces have met, and how the reimagination of the space reclaims it again in a productive way for the community."

Bret McCabe contributed to this report. 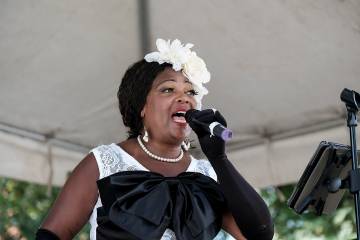 Published Sept 20, 2019
Lawrence Jackson's Billie Holiday Project for Liberation Arts aims to document the history of African American life in Baltimore and foster intellectual ties between the university and the community