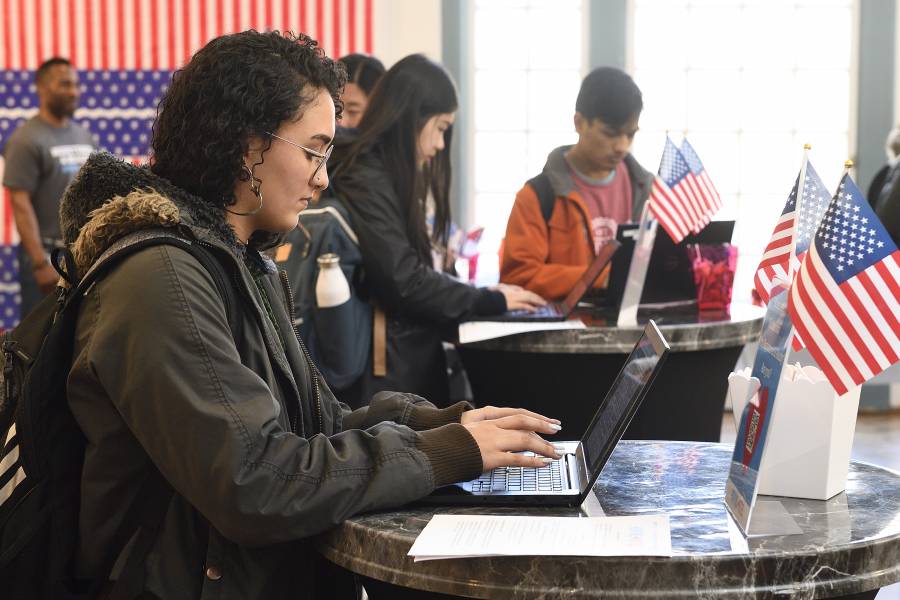 Why young people don't vote, and why 2020 might be different

Scott Warren, visiting fellow at the SNF Agora Institute, discusses why turnout among young voters in the U.S. traditionally lags that of older age groups and the key role civics education can play in creating a more informed, engaged citizenry

As the son of a diplomat who spent his much of his childhood in East Africa and Latin America, Scott Warren saw firsthand the power and promise of democracy. He witnessed a historic democratic election in Kenya in 2002, as well as a coup in Ecuador in 2005, and violent runoff elections in Zimbabwe in 2008.

Those experiences shaped him. They energized him.

Later, as a student at Brown University, Warren was surprised to find that many of his fellow students didn't share his passion for participating in elections.

"A lot of young people want to make the world a better place," says Warren, now a visiting fellow at the Stavros Niarchos Foundation Agora Institute at Johns Hopkins University. "But they don't necessarily see politics as the way to do it."

The rate of participation among young voters in the United States remains among the lowest anywhere in world. Youth turnout in U.S. elections is historically much lower than that of other age groups—about 43% of eligible voters ages 18-29 cast a ballot in 2016, compared to 66% of those ages 45-59 and 71% of those ages 60 or older.

One of the reasons young voters are traditionally disengaged, Warren says, can be traced to a failure of civics education.

"We don't really teach civics in this country," he says. "And when we do, it's not relevant, it's not exciting, and it's not accessible."

Warren co-founded Generation Citizen in 2008 in an effort to change that. Over the past decade-plus, the organization has become a leader in civics education curriculum and advocacy, partnering with middle and high schools across the country to train educators how to teach what it calls "action civics." The idea is for young people to learn politics by practicing politics, taking direct action on issues they care about—affordable housing, youth homelessness, police brutality.

To date, Generation Citizen has worked with more than 100,000 students across the U.S., preparing them to be active, informed participants in democracy.

Warren will discuss his experiences with Generation Citizen, the attitudes of young people toward democracy, and the role young voters will play in determining the outcomes of the 2020 election as part of a panel discussion on Friday from noon to 12:45 p.m. The conversation, part of the SNF Agora Institute's Election 2020 series, will also include Brent Cohen, executive director of Generation Progress; Kei Kawashima-Ginsberg, director of the Center for Information & Research on Civic Learning and Engagement at Tufts University; and Quill Robinson, vice president of government affairs at the American Conservation Coalition, a nonprofit organization dedicated to mobilizing young people around environmental action.

The Hub spoke with Warren for his insights on why so many young people don't take part in elections, why 2020 might be different, and what issues matter most to the newest members of America's electorate.

Why is it that, historically, younger voters are less engaged in the electoral process and vote at lower rates than older age groups?

Obviously this isn't a new challenge, although I think it's somewhat cyclical—you saw expanded youth turnout in the 2018 midterms, with about 35% of 18- to 29-year-olds voting, which was way up from about 20% in 2014. So you did see a lot more interest. 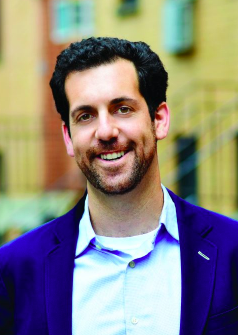 But they do vote at much lower rates than older voters, and there are a few things going on there. First, I don't think we're teaching young people about the importance of participating, about how government works, and about the process itself. And oftentimes what happens—and we're seeing it with this election—is that around election time there are all these efforts to register young people to vote. But that can't be the first time that they're engaging with democracy. And I think that that's too often what happens.

It's like, you don't wake up at 16 and have your driver's license on your doorstep, right? This is something that you've been thinking about for a while. It's a rite of passage. And then you get your permit, you take classes, you actually get behind the wheel before you get your license. I think we need to do similar work in our democracy. And so having effective civics education is incredibly important.

I do think that there's also a problem in that young people don't see democracy and politics as relevant to their lives. And so you're seeing increasing numbers of young people that are just fed up with politics. It's like, with the presidential debate that we had recently, I think the reaction is, why would I get involved in this? Why would I participate? This isn't relevant to my life.

There are also structural problems—it's hard to register people who are in college. They don't know if they should register where they attend college or in their hometown. We've done some work that shows that voting is habitual, and so when students are registering for the first time, but they're in college, they might miss their first election. And then they're much more likely to miss the next election. Lowering the voting age to 16 is a structural change that would help a lot in the sense that you would ensure that young people are voting while they're still in secondary school. And then it becomes more of a habit—they vote in their first election and they're much more likely to vote in subsequent elections.

There do seem to be some signs of young people perhaps becoming more engaged in this election cycle than they have been in the past. Is that something that you have seen? And are there reasons for that you can point to?

Yes, you've seen registration numbers go up, and I think there probably are young people that are frustrated with this administration and motivated to turn out as a result of that. You've seen a lot of efforts from athletes, from entertainers to get young people to register—hopefully that's resonating, and so it's my hope that the voting rates are much higher.

"A lot of young people want to make the world a better place. But they don't necessarily see politics as the way to do it."
Scott Warren
Visiting fellow, SNF Agora Institute

I will say, irrespective of what the voting rates are this year, there needs to be more of the structural reform put into place, so it's not cyclical. Because too often we see this—so the Obama election in 2008, there was tremendous youth turnout. And in 2012 they didn't have near the same amount.

What are the issues that you see motivating young voters right now?

One, it's frustration with this current administration. I think with younger voters, they've had to deal with a lot. You're dealing with the aftermath of the economy that was caused by a pandemic and the government's inadequate response to it. Young people also had to deal with the 2008 financial crisis. So I think that there's a lot of frustration with how politicians have dealt with issues.

You're also seeing a lot of energy around racial injustice and people taking that to the polls. This is an area where I'm hopeful, where young people are recognizing that if you care about police brutality and if you care about racial justice, there is a disproportionate amount of influence that local governments have. Local governments decide how policing units are funded, they decide the laws—there's a limited amount of influence that the federal government has on issues of racial justice.

Young people also care a lot about climate change, and that is an area where the generation that is emerging is going to face the repercussions of inaction. And there are other issues—education, just the fact that if you receive a public education right now versus if you receive a private education, your experiences are vastly different. And again, this is why I believe in lowering the age of eligibility to 16.

I'd like to talk more about that your work with Generation Citizen—how that can feed the pipeline of informed, engaged voters.

At the core of it is, young people have passion. They have energy. Every time we've seen change in this country, it's because of young people. But they're not given the same opportunities to participate. Our education system, which ostensibly was designed to ensure that it was cultivating the next generation of citizens, deprioritized civics education for decades, which I don't think is unrelated to the fact that we don't have young people participating as much. Most districts have one class, if any, on civics education. It's been marginalized.

So what's important to us is that students as a class choose an issue that they care about and that they can take action on. In the short term, they're actually working on these issues, and politicians listen to them. And in the long term, they're gaining the knowledge and skills to become engaged citizens and informed voters who actually understand how politics is relevant to their everyday lives.

Tell me about your role at the SNF Agora Institute and what you're involved with there.

I'm teaching a class on social entrepreneurship policy and systems change this fall—it's thinking through, how do we actually see big social change in this country? And what's the intersection with policy?

And then, sort of going back to my roots, this is a moment in which democracy is at risk everywhere, not just in the U.S. So we just hosted a conference earlier this month called "Cultivating Youth Activism." And the purpose is really, how do we have this broader conversation with young people literally across the world on what they are seeing in their communities? How are they engaging an activism in this time of pandemic? And how can we actually learn from each other?

We had young people from Nigeria, from South Sudan, from Thailand, from the Philippines, from Mexico, from Brazil, from Tanzania, from Italy, all engaging together on this question of what are some of the issues we're facing and how can we take action? I'm going to be helping to cultivate a broader conversation on that, and then promoting and thinking about youth activism at Hopkins. That's something I'm excited about as well. 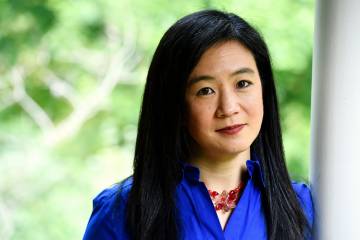 In youth we trust

Published Oct 6, 2020
Hahrie Han, inaugural director of the SNF Agora Institute at Johns Hopkins who specializes in the study of civic and political participation, collective action, and organizing, writes about her greatest hope for democracy 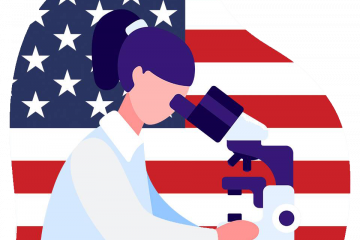 Getting out the STEM vote

Published Oct 19, 2020
STEM majors are less likely than their academic peers to vote in presidential elections. The Johns Hopkins Science Policy Group is looking to change that.