During virtual address, the planetary scientist discusses the environment of Saturn's largest moon and the ambitious APL-built rotocraft mission to explore it

In the video, Elizabeth "Zibi" Turtle appears on screen and her words cut through the silence evocatively.

"Picture a world with a variety of landforms," Turtle says. "It has a dense atmosphere within which rains sweep across its surface. It has mountains and plains; rivers, lakes and seas; sand dunes, and some impact craters. Sounds like Earth, right? This is Titan."

Could there actually be life on this very Earth-like moon? Here's the trail-blazing mission that we're launching to find out: https://t.co/qhvRnGeUY0

In June, Turtle delivered a TED Talk about Titan, Saturn's largest moon, and Dragonfly, a rotorcraft lander mission being built by the Johns Hopkins Applied Physics Laboratory. Over the course of seven minutes, the APL planetary scientist uses her time on the prestigious TED stage to describe this mysterious ocean world and the daring voyage of Dragonfly—the newest mission in NASA's New Frontiers program—set to launch in 2026 and reach Titan in 2034. 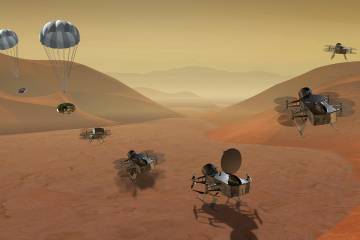 For TED2020's "Uncharted" program, which was held virtually because of the COVID-19 pandemic, Turtle and Dragonfly were a perfect match.

"Dragonfly is a bold, game-changing mission to explore the solar system," said Jason Kalirai, the mission area executive for civil space at APL. "This mission is a visionary combination of creativity and scientific and technical expertise that will help us understand an exotic world that shares many similarities to our own planet. We're honored to have Zibi as our ambassador in telling Dragonfly's story, and leading the Dragonfly team in this unprecedented exploration. It is no doubt uncharted territory."

Turtle closes her talk by emphasizing the magnitude of the mission.

"In 1994 Carl Sagan wrote 'On Titan, the molecules that have been raining down like manna from heaven for the last 4 billion years might still be there, largely unaltered, deep frozen, awaiting the chemists from Earth.' We are those chemists," she says. "Dragonfly is a search for greater understanding—not just of Titan and the mysteries of our solar system, but of our own origins. 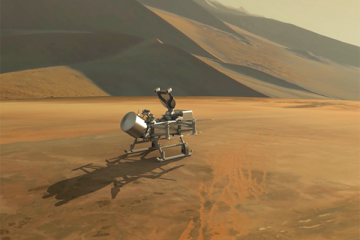