He taught at Johns Hopkins for more than 30 years, studying the atomic origin of macroscopic phenomena such as earthquakes and avalanches and helping lead the establishment of major university computer facilities

Mark O. Robbins, professor in the Department of Physics and Astronomy, and renowned condensed matter and statistical physicist, died unexpectedly on Thursday, August 13, 2020. A cause of death has not yet been made public. He was 64.

Robbins specialized in non-equilibrium processes like friction and adhesion, working to better understand the atomic origin of macroscopic phenomena such as earthquakes and avalanches. He also played a key role in supporting the development of computational facilities at Johns Hopkins, and was associate director of the Institute for Data Intensive Engineering and Science, coordinating the institute's computing efforts.

"Mark was a brilliant physicist," said Robert Leheny, also a professor in the physics department and a colleague who worked closely with Robbins. "What I admired most about Mark was his keen eye for interesting problems, which he combined with deep intuition, to make beautiful insights about the physical world that many would have overlooked." 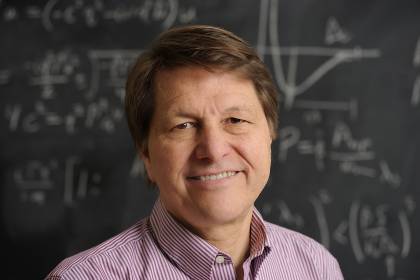 Robbins also made an impact on his students. "[Mark] was greatly liked and admired by generations of graduate students and postdocs, and a large part of his legacy will be his many former group members who are now emerging as leaders in their own right," Leheny said. "Mark really set a positive tone in the department, and in the condensed matter group, that made it an enjoyable and invigorating place to work and study. On a personal level, Mark was a great friend and mentor to me. He made me feel at home and supported from the first day I arrived in Baltimore. I feel a terrible loss on his passing."

Robbins grew up in Newton, Massachusetts, and received his BA and MA degrees from Harvard University. He spent a year as a Churchill Fellow at Cambridge University before receiving his PhD from the University of California, Berkeley in 1983. Following a postdoctoral fellowship at Exxon's Corporate Research Science Laboratory in New Jersey, he joined the Department of Physics and Astronomy at Johns Hopkins in 1986.

According to Bloomberg Distinguished Professor Alex Szalay, Robbins was central to the grass-roots effort to build the first shared computing cluster at JHU and subsequent expansions of that system. His efforts were also critical to establishing the alliance that resulted in the Maryland Advanced Research Computing Center, the largest computing system at JHU, and he was part of the team to receive a multi-million dollar grant from the National Science Foundation to expand the MARCC.

"Mark was the driving force behind bringing modern, high-performance computing to Johns Hopkins," Szalay wrote. "The large computing systems he helped to create have changed the way we all do our research—he left indelible marks behind."

On a research trip to Brazil in 1987, Robbins picked up what he humorously described as a "dangerous habit" of collecting and crossbreeding orchids. He grew a diverse number of the species, from miniature species with blooms no larger than a watermelon seed, to upward twisting palm-sized sculptural flowers. After growing hundreds of orchids in the basement of his home and his office in Bloomberg Center, Robbins also developed new breeds of orchids through experimental crossbreeding techniques, earning him an Award of Merit from the American Orchid Society. He officially named two of his new orchids after his children, Thomas and Catherine.

"Mark had a wide range of interests in theoretical soft condensed matter physics, and his work always showed impeccable tastes," wrote Chia-Ling Chien, professor in the Department of Physics and Astronomy. "One of the first things to bring him fame while still an assistant professor was his research addressing the microscopic origin of friction, a phenomenon so ubiquitous yet poorly understood."

Added Timothy Heckman, chair of the Department of Physics and Astronomy: "Mark Robbins was a great colleague and true leader. His passing leaves a gaping hole in the fabric of our department. We will do all we can to support the research team he left behind."

Robbins was a member of the advisory board for the Kavli Institute of Theoretical Physics at the University of California, Santa Barbara and was also on the advisory board of the Boulder School for Condensed Matter and Materials Physics. He became a Fellow of the American Physical Society in 2000 and was awarded a Simons Fellowship in Physics in 2013. He served as chair of the American Physical Society Group on Statistical and Nonlinear Physics and organized symposia and workshops, such as "From the Atomic to the Tectonic: Friction Fracture and Earthquake Physics," for the Materials Research Society and the Aspen Center for Theoretical Physics.

He is survived by his wife, Patricia McGuiggan, an associate research professor in the Whiting School of Engineering's Department of Materials Science and Engineering, and his two children.