Pier Larson, professor in the Department of History and renowned scholar of African history, died of a heart attack on Saturday, July 25, 2020. He was 58.

Larson specialized in Madagascar and the Indian Ocean islands, focusing on social, cultural, and intellectual history in the early modern period. His teaching and research revolved around in the history of East and southern Africa, Madagascar and the Francophone islands of the Western Indian Ocean, slavery, literacy, religion, and the history of the French empire. From 2013 to 2014, he served as the Krieger School's acting vice dean for the humanities and social sciences. 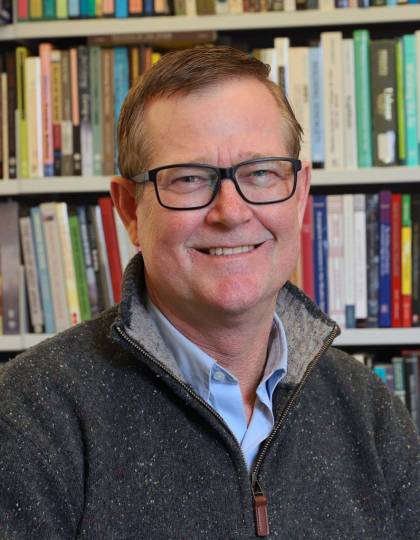 "Behind Pier Larson's quiet and modest demeanor stood a prodigious intellect and a deep commitment to Johns Hopkins, where he was a devoted teacher and mentor," says Peter Jelavich, professor and chair in the Department of History. "Above all, he was consummately cosmopolitan: equally at home in the United States, France, and Madagascar, with prodigious linguistic abilities, he bridged cultures with ease, at the same time that he understood and appreciated their differences. This truly humanistic attitude allowed him to uncover hitherto unperceived connections among peoples and cultures in the past—and it guided his life in the present."

Born in Paris, Larson grew up in Madagascar, where his parents were teachers and missionaries. This experience laid the groundwork for his academic interest in, and deep personal understanding of, the people, languages, and culture of that island, says Jelavich. His scholarship was based on extensive research in archives throughout Europe, East Africa, and the Indian Ocean, and he was known for his extensive use of Malagasy documents as well as interviews with local informants.

His first book, History and Memory in the Age of Enslavement: Becoming Merina in Highland Madagascar, 1770-1822 (2000), examined the impact of the slave trade on the politics, society, and culture of central Madagascar. His prize-winning second book, Ocean of Letters: Language and Creolization in an Indian Ocean Diaspora (2009), which was an extensive study of the Malagasy diaspora on the southwestern Indian Ocean islands as well as along the eastern coast of Africa from the 17th through the 19th centuries, opened up new vistas on the cultural and linguistic complexity of those areas.

Larson was working on two further book projects. One was a history of the state and bureaucracy of the Kingdom of Antananarivo (central Madagascar) from the 1820s to the 1860s, which promised to be the first history of that kingdom based primarily on its own archives rather than foreign sources. The other explored France's Indian Ocean empire from 1750 to 1850 through the lens of a single family over many generations: based on Mauritius, the family of Malagasy women and French men conducted commerce spanning Madagascar, the Mascarene islands, and St. Helena.

"Professor Larson was deeply committed to serving the Department of History and the university, to which he expressed great dedication and devotion," Jelavich says. "He played a central role in teaching African history, as he inspired generations of undergraduates and mentored a large cohort of doctoral students. He also contributed to the Krieger School more generally, as executive board member of Africana Studies, as director of International Studies, and as vice dean of humanities and social sciences. He was responsible for many initiatives, such as acquiring the first Foreign Language and Area Studies grants, which have allowed dozens of Hopkins students to acquire language and cultural competence training throughout the globe. He also provided generous service to the historical profession in the United States, France, and Madagascar."

"He cultivated professional ties across the globe, and his work was—and will remain—widely admired abroad. He was a world-class scholar of great renown."
Michael Kwass
Professor, Department of History

Larson also helped to create the International Centers and Programs office, which has enabled area and thematic studies programs to advance their work and collaborate in new ways, and was committed to taking the undergraduate International Studies program to the next level, securing a larger programming budget and additional resources for it while in the dean's office.

"I would not be surprised if few of Pier's colleagues know about these contributions, especially the FLAS," Van Morgan says. "Pier was a humble and private man. He did not boast. I have to imagine that his Minnesotan Lutheran background had something to do with this modesty."

Michael Kwass, professor in the Department of History, describes Larson's love for working in Africa and Europe, where he collaborated with colleagues from around the world. Last spring, he was the inaugural fellow in a new exchange program between Krieger's history department and the École des Hautes Études en Sciences Sociales in Paris, France's premier research institute in the social sciences.

"I spoke with him regularly while he was abroad and could tell how happy he was to be collaborating with French colleagues on numerous projects while conducting research on his own books," Kwass says. "He cultivated professional ties across the globe, and his work was—and will remain—widely admired abroad. He was a world-class scholar of great renown."

In addition to his scholarship and teaching, Larson was a valued mentor. "Less visible than all his hard work on committees and in the dean's office but equally important was his commitment to mentoring junior faculty and graduate students," Kwass adds. "He read their work assiduously, offered valuable feedback, and guided them steadily through the labyrinth of the academic profession. As chair of History, I relied on him for sage advice about the inner workings of the university."

He continues: "Pier was a brilliant, conscientious, and highly principled colleague. His loss is unfathomable. His colleagues in the history department, across the Krieger School, and throughout the world will miss him dearly."

In addition to serving as acting vice dean for the humanities and social sciences, Larson was director of the International Studies Program (2013-14); a member of the Dean's Advisory Committee on Budget and Strategic Planning (2012-13); a member of the Homewood Academic Council (2010-11); and an executive board member of the Center for Africana Studies (2003-12).

Among other awards, he received the Wesley-Logan Book Prize in African Diaspora History from The American Historical Association (2010); a Johns Hopkins Kenan Grant for Innovative Teaching (1999 and 2005); a Charles A. Ryskamp Research Fellowship from the American Council of Learned Societies (2003); and a Fellowship for University Teachers from the National Endowment for the Humanities, Division of Research (2003).

He served as co-chair of the Local Arrangements Committee of the African Studies Association's annual conference (2013); a member of the Acquisitions Committee for the Arts of Africa, Asia, and the Pacific Islands at the Baltimore Museum of Art (2010-12); a member of the Graduate Student Prize Committee of the African Studies Association of the United States (2009-10); a member of the jury for the Frederick Douglass Book Prize, awarded to the most outstanding nonfiction book published in English on the subject of slavery and/or abolition and antislavery movements by the Gilder Lehrman Center for the Study of Slavery, Resistance, and Abolition at Yale University (2008); and a member of the Committee on Research Grant Awards (Africa, Asia, and Europe grants) of the American Historical Association (2006-09).