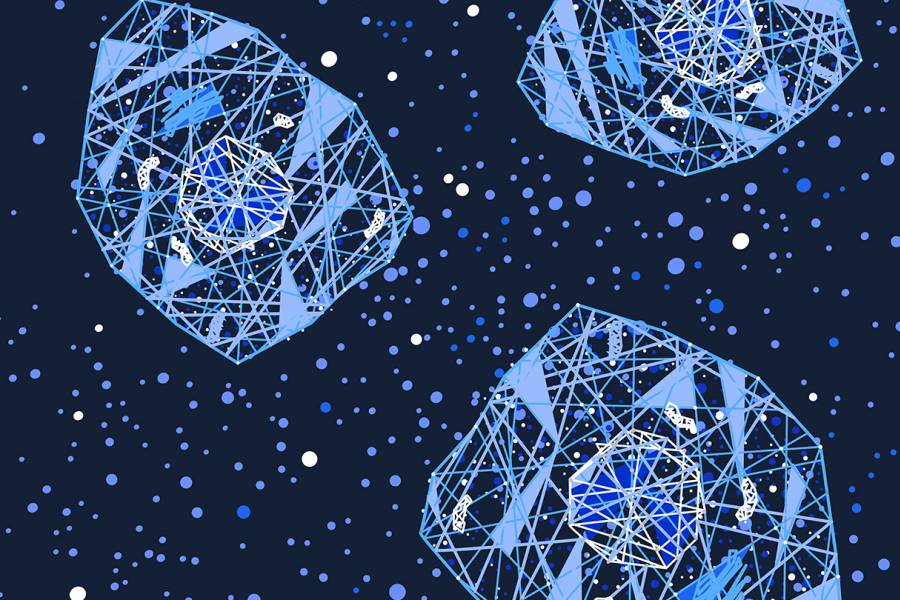 The name "cytokine storm" is apt. It describes a furious gale-force swarm of molecules unleashed by the body's immune system that causes extreme inflammation, tissue damage, even death. Cytokines—from the Greek cyto for cells and kinos for movement—are important in the fight against viral infections. But they worsen those same infections in the extreme, a phenomenon that is proving lethal for older COVID-19 patients.

"The immune system is a double-edged sword," says Andrea Cox, a professor of medicine in the Johns Hopkins School of Medicine. "There's a critical role for it in an antiviral response. But it also can be pro-inflammatory in a pathological way. It's like trying to kill a bug with a hammer. You can put a hole in the wall while you're trying to smush the bug."

Cox is among several Hopkins scientists studying cytokine storms and their relationship to COVID-19. Her lab, which includes infectious disease postdoctoral fellow Andrew Karaba, is analyzing blood and lung tissue samples from infected patients to identify specific cytokines involved. They want to know why they turn dangerous, especially among the elderly.

Other researchers are testing drugs they hope will prevent the onset of cytokine storms, or stop them after they begin. The goal, ultimately, is to save those at greatest risk from this potentially deadly complication of SARS-CoV-2 infection.

Cox and her team are studying a range of illness, "looking for things found in very severe illness, and in those who are not very severely ill, to understand why some are getting sick and others not," she says. "We want to narrow it down to the smallest number of things consistent among the groups. Cytokines are produced as part of an innate sensing pathway. If we can identify that overly active pathway, we can find ways to block it."

"It's like trying to kill a bug with a hammer. You can put a hole in the wall while you're trying to smush the bug."
Andrea Cox
Professor of medicine

There are several dozen cytokines—protein messengers—that affect the immune system. In some cases, they activate certain responses, while in others, they slow them down. Sometimes the system goes awry, triggering too many cytokines, too rapidly. This also occurs in auto-immune diseases, other infections, and as a side effect of certain immunotherapies.

In COVID-19, cytokine storms disproportionately strike the elderly, "for reasons that are not clear," Cox says. "Immune system balance is regulated differently at different ages. It's not that the immune system is weaker or stronger in older versus younger–but different. It's possible that older people make a more damaging immune response than the young."

Most commonly, patients seem to be holding their own against the initial SARS-CoV-2 infection before suddenly turning gravely ill. Often, the outcome is grim.

"Cytokines tell other cells to do things that in this case may enhance tissue damage and disease severity," Cox says. "With blood vessels, for example, it can cause the vascular system to leak fluids and blood, and make it harder for oxygen to go where it's supposed to go because there is fluid where oxygen should be, like in the lungs."

Understanding a cytokine storm's role in COVID-19 is a multidisciplinary effort at Hopkins, including researchers taking a new look at old drugs.

"It has been terrific to see people from all different fields [at JHU] respond," says Russell Wesson, assistant professor of surgery in the School of Medicine, and a transplant surgeon. "People are looking at using different drugs to see their effect on COVID, and almost all of these efforts involve repurposing other drugs."

Wesson is working with principal investigator Nada Alachkar, associate professor of medicine and medical director of the Incompatible Kidney Transplant Program, and scientists from the nephrology and infectious diseases groups in a multicenter study testing Clazakizumab, a medication that prevents organ rejection in kidney transplant recipients. It works by suppressing interleukin-6 (IL-6), an immune system cytokine found elevated in the sickest COVID-19 patients.

The clinical trial is double-blinded and placebo controlled, meaning neither the researchers nor the patients know who gets the drug or a harmless substitute. The subjects include patients who are seriously ill, including those on ventilators. "We know this drug very directly affects IL-6 and believe that neutralizing it will help stop cytokine storm, or prevent it from progressing," Wesson says. "The study is blinded, but we have seen encouraging results, among them patients who have recovered rapidly."

"It's gratifying to see the work of our lab translate into something that might help. It makes me feel a little less powerless as this pandemic unfolds."
Chetan Bettegowda
Professor of neurosurgery

Researchers from the Kimmel Cancer Center, the divisions of rheumatology and infectious diseases, and the departments of neurology and neurosurgery, are testing another drug, Prazosin, an alpha blocker used to treat hypertension, enlarged prostate, and post-traumatic stress disorder. They think it could prevent cytokine storms by blocking a surge of molecules known as catecholamines, substances made in the brain and adrenal glands that—based on an earlier mouse study—typically precedes the onset of a cytokine storm.

The researchers first examined a national database of patients with Acute Respiratory Distress Syndrome, or ARDS, a condition characterized by fluid accumulation in the lungs, not unlike what happens with COVID-19. They found fewer deaths and less need for ventilators among those who had been taking drugs like Prazosin, leading them to speculate that the drug could similarly benefit patients with COVID-19.

"Between the preclinical data from animal models and the retrospective data from humans, we felt there was good rationale to test this concept with COVID-19," says Chetan Bettegowda, a brain tumor specialist and professor of neurosurgery in the School of Medicine. The team, which also includes Bert Vogelstein, director of the Ludwig Center, professor of oncology and pathology, and a Howard Hughes Medical Institute investigator, and rheumatologist Maximilian Konig, a postdoctoral fellow, recently began a controlled trial to see if Prazosin, given early after infection, can stave off a cytokine storm. "This is a preventive approach," Bettegowda says. "If patients are already manifesting signs of cytokine storm, it's unlikely to work."

For her part, Cox has long studied infectious diseases, so she is aware of the challenges posed by a newly identified virus.

"The problem with these pandemic viruses is that no one in the world has seen anything like them," Cox says. "There is no immunity. What's worse, the rules for who does well and who does badly are different for this virus than for other viruses, and, right now, we don't understand the rules at all."

For the others, the research represents a departure, albeit a welcome one, as they are glad to be involved in the fight.

"It's heartbreaking to see so many people who pass away alone, who can't have their loved ones with them, so it's gratifying to see the work of our lab translate into something that might help," Bettegowda says. "It makes me feel a little less powerless as this pandemic unfolds."