Forster, who taught at Hopkins from 1966 to 1996, was renowned for his work on the history of early modern France and is remembered as a generous, supportive mentor

Robert Forster, professor emeritus in the Department of History at the Johns Hopkins University Krieger School of Arts and Sciences, died May 12 of congestive heart failure at his home in Cockeysville, Maryland. He was 93. 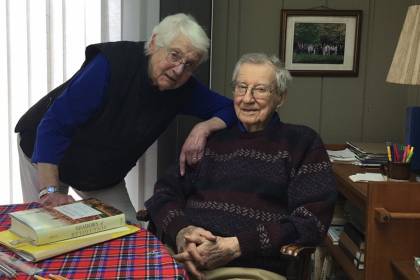 Image caption: Robert Forster is pictured with his wife Elborg. A scholar of French history, he is survived by his wife, his two sons, and his grandchildren.

Forster was renowned for his work on the history of early modern France, publishing seven books on the subject. He made major scholarly contributions through his study of a notable family from the Bordeaux region and a ducal family from Burgundy. Deeply interested in social history, he studied social rank and the relationship between wealth and dignity. In later years, his research turned to the Dominican Republic.

Born in New York City, Forster earned a BA in history from Swarthmore College in 1949, an MA in modern European history from Harvard in 1951, and a PhD from Johns Hopkins in 1956. Research for his doctorate centered on the nobility in and around 18th-century Toulouse, France, a city he loved and where he met his future wife, Elborg Hamacher. The University of Toulouse later awarded him an honorary doctorate.

"As everyone who knew him would agree, Bob was a wonderful person," says Gabrielle Spiegel, a professor in the Department of History. "As John Marshall has said, 'He was kindness personified—gentle, thoughtful, supportive, and encouraging.'"

Spiegel first met Forster as a graduate student in the late 1960s, when she learned "an enormous amount" from him during a field exam in French history. He then advocated for her to be excused from an oral defense of her fields because she had written so much. "This was the kind of intellectual generosity that I think Bob often displayed, along with his kindness and care for students," she says.

When Spiegel joined the faculty 20 years later, Forster made sure she felt welcomed and accepted as a full-fledged member of the department. "We often shared graduate students focusing on French history and as far as I can recall, never disagreed about anything in considering them and working to make sure they succeeded," she says. "He was always a delight to be with, and he will be sorely missed by all who knew him."

Forster loved teaching occidental civilization, and taught it every other year for decades. He quickly gained a reputation for being firm but flexible, listening to graduate students, and encouraging them to research what really interested them.

"Bob Forster was an extraordinary mentor in terms of historical training, intellectual guidance, and human warmth," says Lisa Jane Graham, who earned her PhD in history under Forster in 1994 and is now a professor of history at Haverford College. "A social historian by training, he cared about human beings, the dead and the living. His commitment to his graduate students and their well-being ran deep."

Graham learned lifelong lessons from Forster's careful review of her dissertation chapters. "He favored plain language over jargon, clarity over complication. He taught me to think about the reader when writing anything," she says.

Graham fondly remembers a lunch with Forster during a year in Paris conducting research. Over crepes and hard cider, they discussed archives, history, France, and life. "His lack of pretense put the anxious grad student in me at ease," she says. "He never made me feel like mentoring was a burden. Bob believed in me before I believed in myself and he never wavered in his support. He modeled mentorship for me and I try to live up to his standard in my own career as a teacher and scholar."

Another former student had similar experiences with Forster's support on both professional and personal levels. "I was so lucky to have him as a mentor. He was a terrific grad school adviser; always read my stuff very quickly, and was both encouraging and critical," says Christine Adams, who earned her PhD in history under Forster in 1993 and is now a professor of history at St. Mary's College of Maryland.

"Bob took such great pleasure in the little things in life like a glass of white wine at the end of the day," Adams adds. "He was an extremely gentle, cultured, and intellectually curious man. He was a great historian, and nothing excited him so much as a great find in the archives. He adored Elborg; I loved the way that the two of them interacted."

Others also recall the special atmosphere the Forsters created together for others. "Bob was a wonderful colleague, but I also remember the deep and lasting kindness of Bob and Elborg," says Ronald Walters, a professor in the Department of History. "[Mine] was a bumpy ride from Berkeley graduate student to a very junior Hopkins faculty member. In addition to his scholarship, Bob's cheerfulness and support were inspirational."

A gregarious, urbane man who loved conversation and was sensitive to the feelings of others and understanding of differences, Forster had a "liberal imagination," says Orest Ranum, a professor emeritus in the Department of History and a lifelong friend.

"Bob was never nervous about anything," Ranum says. "His command of the social world was complete; he felt relaxed, and totally himself." The two met at a bookstore in Paris in 1960, and Ranum invited Forster home for what would be the first of many weekly lunches over the years. A stamp collector, card player, and lover of old movies and games, Forster invented a version of Monopoly set in 18th-century France.

He was a fellow at the Institute for Advanced Study in Princeton, New Jersey; a fellow at the Center for Advanced Study in Behavioral Sciences at Stanford; and a U.S. representative to the International Congress of the History of Sciences. He was a member of the International Commission for the Study of the French Revolution; the Society for French Historical Studies, serving as its president in 1974; the French Colonial History Society; the Association of Caribbean Historians; the American History Association, serving on its council from 1985 to 1988; and Phi Beta Kappa. He served in Italy with the U.S. Army from 1944 to 1946, experiencing several months in quarantine during an epidemic.

Forster is survived by his wife, his two sons, and his grandchildren. 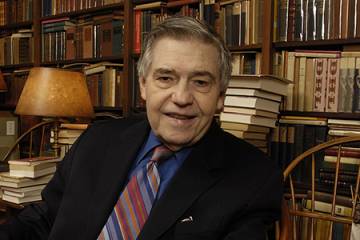 'When Hopkins alums think of the humanities, they think of Richard Macksey'

Published July 23, 2019
The longtime Hopkins professor known for his varied interests and extensive library has died at 87