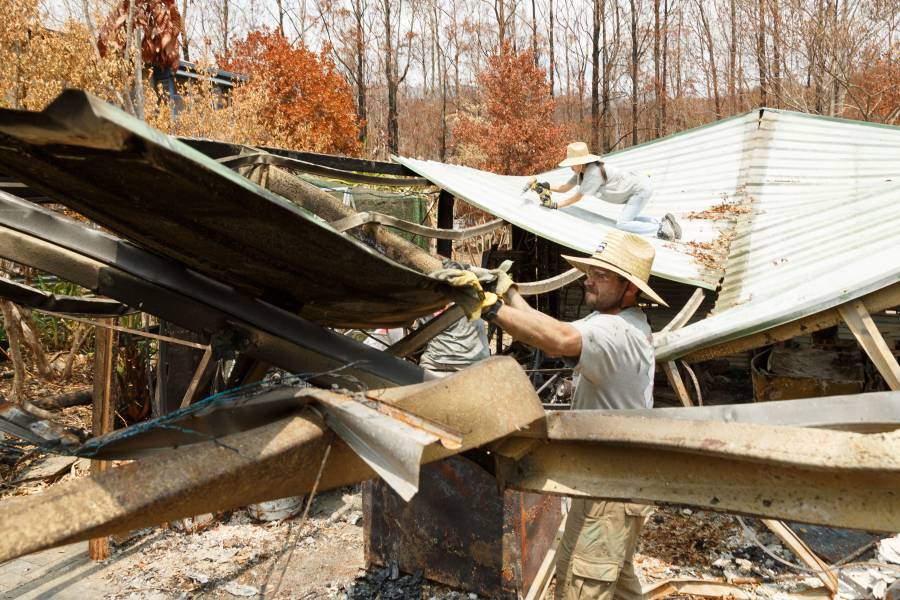 Image caption: Alum William McNulty sorts through the rubble of a home destroyed by the Australian bush fires

His return to service

When William McNulty, A&S '07 (MA), touched down in Sydney a couple of days before Christmas, it was his first time in Australia, but in many ways it was a homecoming. He and his partner, Grace, were volunteering for Team Rubicon, the relief organization McNulty had founded and since resigned from. The 2017 parting had been amicable; McNulty says he was happy with the organization's progress and wanted some time for the minor matter of "figuring out what I wanted to do with the rest of my life." He remained involved as "founder emeritus," he says. But when he and Grace saw YouTube videos of the devastation caused by the Australian bush fires, they felt compelled to act.

A former Marine sergeant who served tours in Korea and Iraq, McNulty co-founded Team Rubicon in 2010 as the world's first aid initiative to recruit, train, and deploy military veterans for disaster relief. Until his resignation, McNulty had been working to build and certify Team Rubicon units in other countries, which would all operate under the umbrella of Team Rubicon Global. For December's mission, he joined a TRG crew made up of 23 veterans from four different countries in Willawarrin, New South Wales. A tiny town some 300 miles from Sydney, Willawarrin lacked the resources to mount a full cleanup effort. 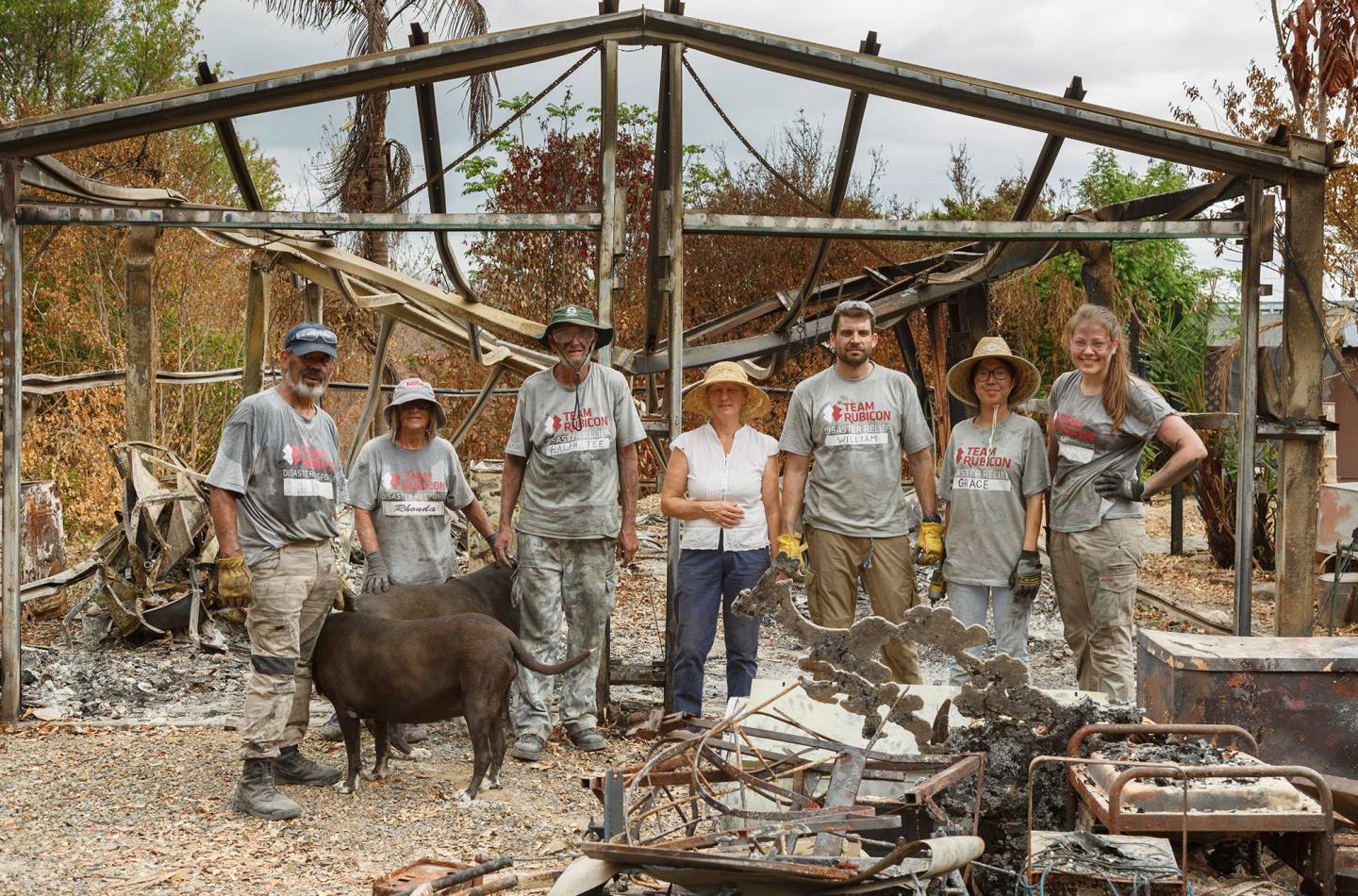 Crew members spent the majority of their time clearing fallen trees from roadways and helping homeowners sift through debris to salvage their belongings. On Christmas Eve, they were dispatched to the decimated property of longtime Willawarrin resident Sue-Ann Schaeffer, a scene McNulty describes as apocalyptic. When they arrived, Schaeffer was working to recover anything she could find from the home she had shared for 30 years with her husband, Peter, who died of cancer a few years ago. Peter was an Australian veteran who suffered from PTSD after his time in Vietnam. The couple had moved to this quiet, rural place for the isolation that helped ease the condition. Now, like more than 3,000 other homes across Australia, theirs was gone.

Early this month, all the bush fires in New South Wales had been contained, but only after claiming 33 lives and 20% of Australia's forests. While the country endures an annual fire season, this one was exacerbated by a historic drought that left dry timber everywhere. Relentless winds made things worse. It wasn't just humans that were affected; an estimated billion animals were killed in the blazes.

While McNulty and the team worked with Schaeffer to sift through the ash, some promising signs of life appeared nearby: a curled-up python next to a debris pile, another snake near an outdoor latrine, and a 7-foot monitor lizard looking on from some charred vegetation. As for Schaeffer's things, the team was able to salvage small metal objects, cutlery and trinkets. It wasn't much, but it was something. As they left that day, McNulty remembers Schaeffer praying for rain. "The roots of the trees could still be burning on the hillsides," he says, "the threat of fire was still ever near."

The next day the TRG crew gathered at Willawarrin's only pub; "think Crocodile Dundee," says McNulty. It was Christmas and Schaeffer had sent a cake to thank the team. Suddenly, the celebration was interrupted by the sound of rain pelting the roof. They were the first drops of the nearly 2 inches that would fall that day—more precipitation in a single day than the town had seen all year. Her prayers had been answered.

McNulty found those three days in Australia a deeply rewarding experience. "In Iraq or Afghanistan, it could be so tough to judge the progress," he says. But in helping Willawarrin residents recover from tragedy, "progress was tangible." That the team was made up of veterans from around the world made it all the more special. "Regardless of what country we are from, we're all affected by our military service in different ways," he continues. "To see the healing process, happen … it's incredibly emotional." 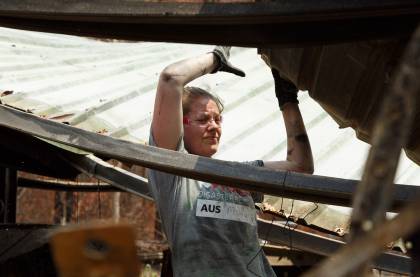 It's one of the reasons McNulty started Team Rubicon in the first place, to utilize skills that veterans possess in spades—teamwork, decisive leadership, risk mitigation, emergency medicine, experience working with civilians—while offering them the things they missed after their military careers had ended: a larger purpose, a sense of community, and camaraderie. "Continued service and giving back help issues of reintegration, PTSD, suicide and survivor's guilt," McNulty explains. "All these things can be mitigated if you establish a community, give veterans a new mission, and foster a new sense of identity."

During his time in New South Wales, McNulty weighed an important decision. A few weeks before he deployed, TRG's board of directors asked him to return to the organization in an official capacity. Going to Australia was his way of resolving any lingering doubt about the move. "I needed to know if I still had the passion," he says. The answer came loud and clear to McNulty, who was voted in as CEO on January 7. "Being on the end of the shovel again told me everything I needed to know." 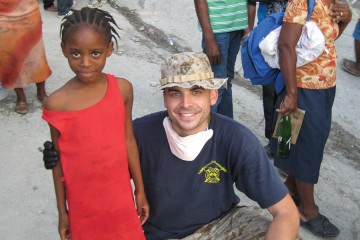 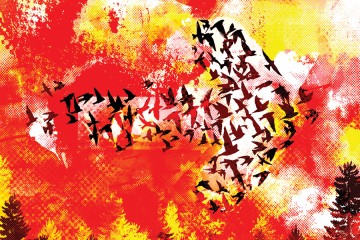