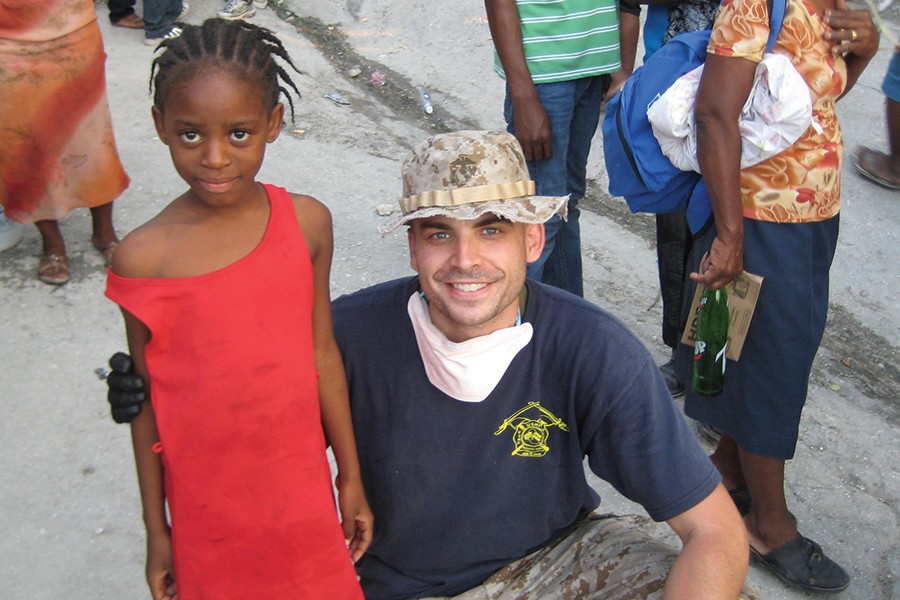 William McNulty, A&S '07 (MA), a former U.S. Marine intelligence officer, remembers watching the television reports of the devastation caused by the 2010 earthquake in Haiti. The graduate of the Johns Hopkins Advanced Academic Programs spoke with a contact living there, who told him the lawlessness wasn't as bad as the media portrayed, but people desperately needed help because international aid organizations had yet to arrive. McNulty contacted an old friend from the Marines, Jake Wood, and along with a small team of doctors and other veterans, they made their way to Port-au-Prince with much-needed medical supplies. More veterans soon joined the effort, and the team was able to help thousands, traveling to areas deemed too dangerous by other aid organizations.

It was the success of that mission that convinced McNulty and Wood to establish Team Rubicon, the world's first aid organization to recruit, train, and deploy military veterans for disaster relief. Since 2010, Team Rubicon has deployed some 7,000 veterans to assist in more than 200 disasters worldwide, including Superstorm Sandy and the 2015 earthquake in Nepal. McNulty, 39, now heads up Team Rubicon Global, which works to expand the organization's model to other countries.

How did you come up with the name "Team Rubicon"?

In 49 B.C., Caesar, defying the Roman Senate, crossed the river Rubicon into Italy with a single legion and reportedly uttered the phrase "alea iacta est," which means the "the die is cast." TR's point of no return was crossing the Artibonite River, separating the Dominican Republic from Haiti. At that point, we were delivering our doctors and supplies to Port-au-Prince and not turning back.

Why did you think military veterans would make effective aid workers?

The skills that veterans have—both soft skills like teamwork, decisive leadership, risk mitigation, and how to work with local nationals, plus hard skills like emergency medicine—were needed on the ground in Port-au-Prince. At that time, Port-au-Prince looked like any destroyed Iraqi city that I had seen. You're talking about people uniquely skilled for these types of environments.

Veterans also get something out of the experience, don't they?

Veterans lose three things when they take off the military uniform: purpose, a sense of community or a support system, and a sense of identity. We realized that continued service and giving back those three things would help them most when considering issues of reintegration, PTSD, suicide, and survivor's guilt. All these things can be mitigated if you establish a community, give veterans a new mission, and foster a new sense of identity.

We have the opportunity to be the most innovative model for disaster response and veteran reintegration since the legions system after World War I. You had the American Legion and similar organizations in other countries, and they primarily involved drinking beer and sharing war stories, but the way they maintained camaraderie, it worked. But our generation of veterans wasn't conscripted, they volunteered. Service is in their blood, and when they take off their uniform, they're still looking for ways to serve.

Tell me what you experienced in Haiti.

There was a cathartic sense of continuing to serve, not needing a weapon but knowing you still have skills to offer with something that was really, really important to me. I felt like I was making an impact. I had become disillusioned while serving in Iraq because I couldn't identify progress, but when you're saving the life of a child in Port-au-Prince or tarping the roof of a house in Joplin, Missouri, after a tornado, the progress is immediately identifiable.

Where does this desire to serve come from?

I come from a military family. My grandfathers both served in World War II. My father was a Green Beret. I come from a family where service is important. I don't think I could work in a bank.

Besides its focus on veterans, how is Team Rubicon different from other international aid organizations like the Red Cross?

The Red Cross does many things well. Food distribution. Sheltering. They are a blood bank.

We don't do any of those things. We're the team that will go in and remove the tree that has fallen on your property. We'll muck out and gut your basement after the flood. We do rapid assessments after earthquakes and hurricanes. We have a wide range of services we provide, but we're complementary to international aid organizations, not redundant.

As Team Rubicon has continued to grow, what lessons have you learned?

The greatest piece of advice that was given to me was by my friend Cameron Sinclair, who is the co-founder of Architecture for Humanity. He said what you have with Team Rubicon is lightning in a bottle, and that rarely comes along. But lightning in a bottle attracts two types of people: the quiet professionals—the people who work hard and keep their heads down—and the light seekers, the people who will be attracted to all the media attention for their own sake. You need to protect yourself from the latter. They will be toxic.

Any mistakes you've made along the way?

Oh, sure, we've made a ton—on the operations side, in messaging, in leadership. At one point, we were going to send a team into Misrata, Libya, to staff a hospital that was being shelled. The board rightly decided that it was not a good idea to reintegrate veterans by redeploying them into a combat zone. I think it's important to be open and transparent with your board. You have a board for a reason.

The organization has expanded to Canada, Great Britain, Australia, and Norway. Are you finding other countries open to the TR approach?

From the start, we've had hundreds of non-American military veterans reach out to us and say, 'Hey, this could work in our country.' It's a global brand now, and one of the greatest challenges I have is de-Americanizing it. We did a good job of growing it on the U.S. side, but in order for it to succeed on the global side, you have to strip the American veneer. For better or worse, we led many of these countries into Iraq and Afghanistan, and one of the things non-American veterans said to us is that while we love this idea, we want our own TRs. We want to be part of a global coalition; we don't want to be subject to an American organization.

Does the model work in other countries?

Absolutely, but the greatest challenge is the culture of philanthropy. Americans are the most giving in the world, and when it comes to veterans' philanthropy, it's almost entirely American-based. That's a challenge when you're trying to build a Team Rubicon in Norway, where it's the expectation of the citizenry that the government provides funding for things like disaster response. It's difficult to find people who want to support that on the financial side.

How do you see Team Rubicon evolving over the next decade?

In 10 years, we see ourselves established in 12 countries. We want TR to have the same global name recognition as other large aid organizations. But in that messaging we want people to understand exactly what we do—and what makes us different.