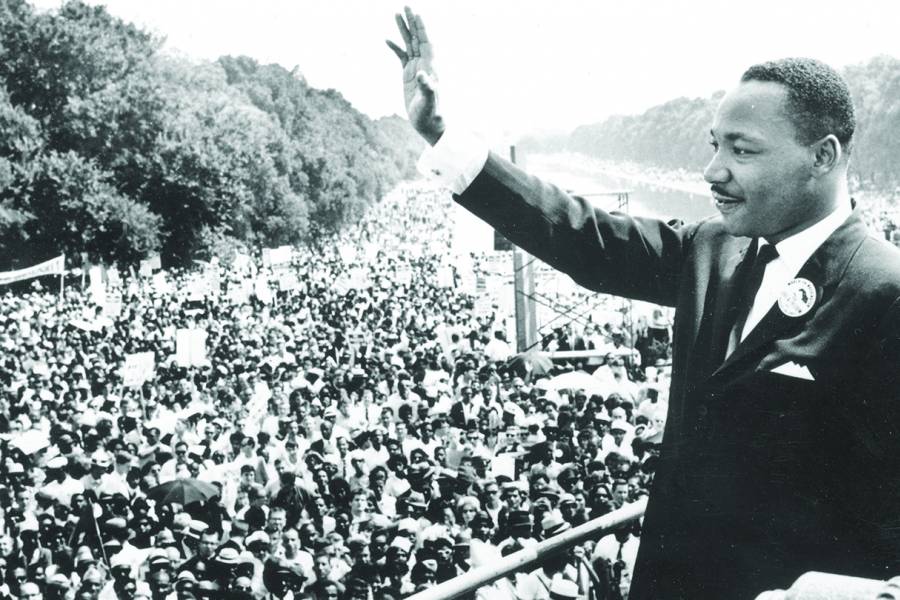 How leaders can inspire through their words

Carey Business School expert on communication behaviors shares insights on how inspirational rhetoric can be used by business, civic, and political leaders

Language and rhetoric are powerful tools for leaders who wish to inspire their listeners to take action.

Steven D. Cohen, an associate professor at the Johns Hopkins Carey Business School, studies the communication behaviors of effective leaders, with a particular focus on executive presence. An experienced trainer, he has created custom courses and leadership development programs for Fortune 500 companies and government agencies to help leaders learn to communicate with confidence, influence, and authority.

Cohen shared his insights on how leaders inspire others and what communication techniques they use to do so.

What is the distinction between persuasion and inspiration, in terms of leadership?

Many people think about persuasion in terms of convincing others. "I believe something, and I want you to believe it, too." Persuasion is about framing a message. It's about using evidence. It's about telling stories. Inspiration, on the other hand, is something greater. 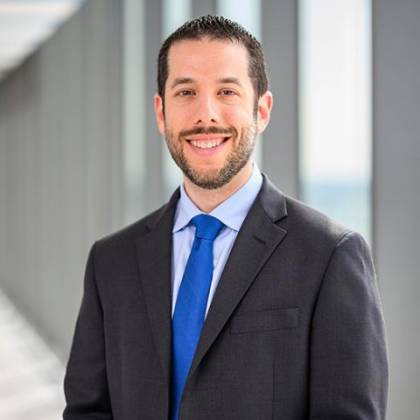 Inspiration is about crafting arguments of the heart. It's about appealing to people more strongly through emotion. And that's the key differentiator between persuasion and inspiration. For example, I may want to persuade you to buy a product. You have the ability to buy that product—I just have to convince you to do it. That's very different than inspiring you to run a marathon. Just because I want you to run a marathon doesn't mean that you can. So when we have a bigger, bolder vision, we have to call on a different set of tools. That's when the tools of persuasion are not enough. That's when we need to harness the tools of inspiration.

Why is the ability to inspire others vital to leadership?

It's not enough anymore for leaders just to be visionaries. They have to be effective rhetoricians. They have to be able to harness the power of language to motivate and mobilize large groups of people to tackle challenges that seem unachievable.

It's important for leaders to talk about goals, but focusing on revenue growth or profitability isn't inspiring. We need leaders who talk about revolutionizing the way the world works, how products and services can change minds and hearts and change society. Language and communication elevate messages and help leaders frame their ideas in more provocative, meaningful ways.

What are some of the tools of inspiration?

The first ingredient is vision. Leaders need to have a clear and compelling vision about what they want to achieve. They have to know where they're headed and why they're headed in that direction. Can you envision a CEO saying, "Let's all commit to doing our routine tasks better?" No, that's not inspirational. An inspiring vision should stretch expectations. It should motivate listeners to do something bigger, to do something challenging, to do something extraordinary.

This anecdote illustrates the difference between an ordinary leader and an inspirational leader. Inspirational leaders paint bigger pictures and set grander goals. They help us envision what's possible and what we can achieve together.

There is a big difference between drive and passion. When you're driven, you push yourself to achieve a goal. You're driven to get good grades, get promoted at work, or get a raise. Passion is something entirely different. Passion pulls you like a magnet toward something irresistible. Leaders, especially inspirational leaders, have to pull people with language and with communication toward a vision they cannot resist.

The last ingredient is language. Language elevates the message. It makes the message linger and resonate in listeners' minds.

You stressed that language is an important element of inspiring leadership. What are some of the rhetorical techniques that leaders use, and how can they be mastered?

The first technique is called holding out hope. When times are tough, leaders need to use upbeat, hopeful language. If a company is facing a difficult quarter or if the product is not selling, a good leader will acknowledge that. The leader won't try to obscure what's really happening. The key, however, is not to dwell on the current situation. Leaders should discuss the situation in an honest and transparent manner, but then quickly pivot to the specific reasons the audience should remain hopeful.

Another technique is to embrace the power of vulnerability. People want authenticity more now than ever before. We no longer expect leaders to be polished and perfect. We want leaders who talk openly about times they've failed, times they've struggled, and times they took the wrong path. These types of stories humanize them and make them more real and relatable.

It's not that leaders should swing the door wide open and share their deepest, darkest secrets. Instead, leaders should crack the door and share a moment that we can relate to and that tells us something about them and about ourselves.

Let me give you an example from politics. Franklin D. Roosevelt would often use folksy language to connect with people on the street. He once said, "I have no expectations of making a hit every time I come to bat. What I seek is the highest possible batting average, not only for myself but for the team." Did Roosevelt always talk like that? No, but it was a way for him to make his message more accessible. So vulnerability matters and accessibility matters. And these are both essential components of inspirational leadership.

What are some other language techniques that inspiring leaders use?

Let me share a few of my favorites. Anaphora is the repetition of keywords or phrases at the beginning of successive clauses or sentences. Think of Martin Luther King, Jr.'s "I Have a Dream" speech. He started successive paragraphs with that same refrain. It's a powerful example of using repetition to make an idea resonate.

Here's another example from Abraham Lincoln: "But in a larger sense, we cannot dedicate, we cannot consecrate, we cannot hallow this ground." The repetition of the words "we cannot" adds power to his message.

Another nice technique is alliteration. Think about these company names: Krispy Kreme, The Coca-Cola Company, Bed Bath & Beyond. See how easy they are to say and remember? Alliteration is a wonderful way to emphasize certain words or ideas. The trick is to use similar-sounding consonant sounds. It's not just about repeating the same letter.

Another one I like is tricolon, the rule of three. Think "veni, vidi, vici" (the Latin phrase meaning "I came, I saw, I conquered") or "life, liberty, and the pursuit of happiness." It's easier to remember three ideas; there's a musicality to three. It's important for leaders to stick with three key messages in any speech or presentation. This approach focuses listeners on the key ideas you want them to remember.

I'll share one more technique commonly used in political speeches—antimetabole. It's where you repeat words in reverse order in the second half of a sentence. Here's a famous example from John F. Kennedy's inaugural address: "Ask not what your country can do for you—ask what you can do for your country."

Imagine if Kennedy had said, "Your country has given you a lot. Now it's your turn to give back." This sentence makes the same point as the original, but it is far less memorable.

This is an election year in America. Candidates across the political spectrum are trying to inspire us and persuade us to vote for them. Do you have any insights for candidates?

Candidates often talk about how they have specific plans for each of their ideas. But here's the thing: Plans are persuasive; genuine emotion is inspirational. It's not enough for voters to read the plans; they have to believe in the plans. They have to feel the impact those plans will have on their lives. To create that feeling, candidates have to back up their messages with vulnerability and authenticity.

But candidates also have to do something more. They have to make voters believe that their plans are achievable—to reform the health care system, to fix the criminal justice system, to slow global climate change. Candidates don't have to tell us exactly how they will get from point A to point B, but they do need to break their plan into logical steps. Once candidates pivot from general ideas to specific steps, voters start to see the path forward and feel as though the plan is achievable.

Another approach is using what I call historical success anecdotes, moments when we faced a similar challenge and succeeded. When I work with political candidates, I often say: Don't just describe your ideas. Remind us of a similar moment when times were tough, but we were able to push forward and get things done. These anecdotes make voters believe that we've done it before so we can do it again.

How important is authenticity for inspiring leaders, and why do so many leaders seem to struggle in this area?

It's extremely important. Some leaders forget what it's like for the average employee or average American family. They forget what life is like for people trying to put food on the table or trying to make sure their kids have access to a high-quality, affordable education. It's hard to relate when you're not having the same discussions around the dinner table.

This problem is exacerbated by the desire to be perfect, to seem like you have it all "figured out." It's not easy to show vulnerability, to open up so publicly. However, cracking the door allows you to connect with people in a much more authentic way. Don't be afraid to say you're wrong or that you made a mistake. It makes you more real.

Sometimes, the message isn't positive and you have to deliver bad news. Leaders need to be direct and upfront even when it's hard.

That's the part of leadership we don't hear as much about.

That's right. Leaders have to be willing to deliver bad news, and they have to be honest about what the impact will be. That's how they can convey authenticity.

What else should we know about crafting inspirational messages?

It's important to highlight the ethical dimension of using these techniques. These rhetorical tools have been used to raise millions of dollars for charitable causes, but they also have been used to bilk people out of their hard-earned savings. We have to hold our leaders accountable and put pressure on them to do the right thing. When leaders do the right thing, there's so much they can achieve.

A few years ago, I read a great book called The Leadership Challenge. In it, James Kouzes and Barry Posner argue that "leaders are possibility thinkers, not probability thinkers." This quote captures the essence of inspirational leadership quite well. Ultimately, we want leaders to play in the sandbox of possibility, not of probability. And when they do, we feel motivated to jump into the sandbox with them and help build a towering sandcastle.