Stephen Barker, a professor emeritus in the Department of Philosophy in the Krieger School of Arts and Sciences, died this week at Roland Park Place. He was 92. 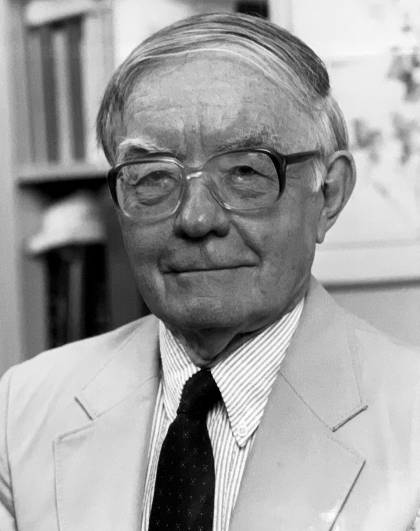 In a field marked by subspecialties, Barker's keen intellect allowed him to remain a generalist, writing and teaching in areas such as epistemology, philosophy of math, history of modern philosophy, theory of knowledge, applied ethics, philosophy of science, and logic. His book Induction and Hypothesis, published in 1957, contributed to the field's understanding of the grounds of inductive inference.

Formal and introverted, Barker was sought out by students and colleagues alike for his critical abilities, for the way he could pinpoint a mistake or a problem in reasoning. Whenever Peter Achinstein, a professor in the same department, finished writing a new paper, he would send it to Barker for comment before anyone else. "I'd show him my work, and he'd be happy to tear it apart and make me feel bad for a day or so, but he was extremely sharp. He had terrific abilities," Achinstein said.

Because of his broad interests and the depth with which he mastered them, Barker attracted a wide variety of students and helped them find their voices, Achinstein said. "He could understand what students were trying to say and he could help them, and he was interested in helping them," he said. "In philosophy, there's not a single way to answer a question, but there are better answers and worse answers, and he could spot easily the worse answers. A lot of people weren't that quick. He could help you—not just criticize you but help you—and I think the students knew this."

Celebrated for his clarity of thought and writing, Barker had high standards for others, too. A former graduate student, Alex Rosenberg—now a professor of philosophy at Duke University—once wrote: "[A fellow student] and I had lunch with Stephen Barker every day for almost three years. It was an informal but influential education in being careful and cogent."

Born in Ann Arbor, Michigan, Barker earned a bachelor's degree from Swarthmore College in 1949 after serving in the Navy for a year; and a master's degree and PhD in philosophy from Harvard in 1951 and 1954, respectively. He was an instructor at the University of Southern California in 1954–55; an assistant and then associate professor at the University of Virginia from 1956 to 1961; and a professor at Ohio State University from 1961 to 1964. He arrived at Johns Hopkins as a professor in 1964, and was named emeritus upon his retirement in 2002. He continued to teach for several years in what is now the Krieger School's Advanced Academic Programs.

In addition to Induction and Hypothesis, he published two books in 1964: The Elements of Logic, a textbook still used today, and Philosophy of Mathematics. Both titles were published as part of a prestigious series from Prentice-Hall.

He edited or co-edited several other books, and published dozens of articles and reviews. He was a member of the American Philosophical Association, the Hume Society, and the North American Kant Society, and he served on the board of editors of Professional Ethics and Essays in Philosophy.