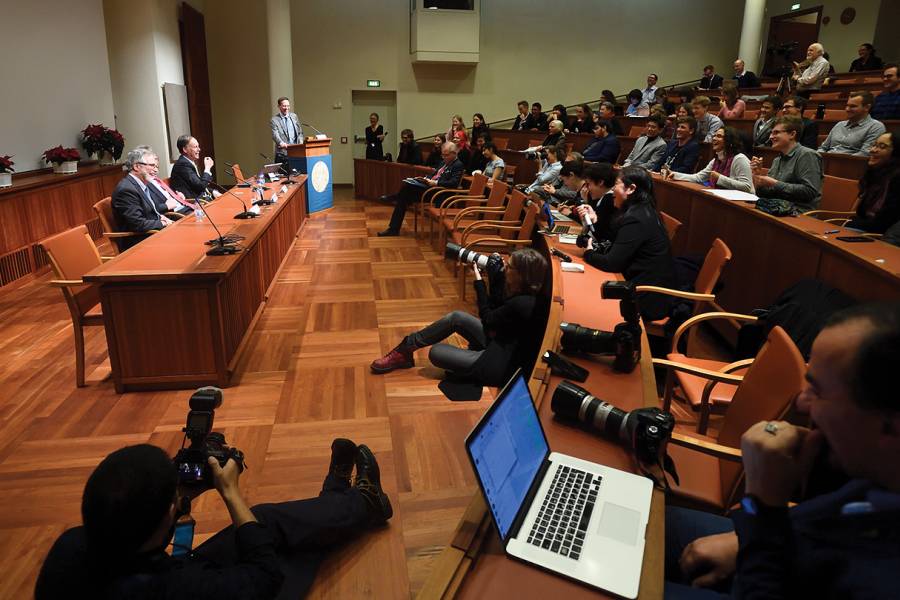 Gregg Semenza, William B. Kaelin, and Sir Peter J. Ratcliffe, winners of the 2019 Nobel Prize in physiology or medicine, discuss their award-winning findings and the importance of inspiring a new generation of researchers

STOCKHOLM—On their first full day of activities for the 2019 Nobel Week, Johns Hopkins physician-scientist Gregg Semenza and his two fellow laureates in physiology or medicine, William B. Kaelin and Sir Peter J. Ratcliffe, held a joint news conference that was equal parts celebratory, serious, and lighthearted. The conference was fittingly held at the Nobel Forum, home of the Nobel Assembly at the Karolinska Institutet, the body that awards the Nobel Prize in this category.

More than 60 local and international journalists attended the afternoon event, including 25 members of the National Society of High School Scholars, academically gifted high school and college students from around the globe who applied for the highly-selective honor of taking part in Nobel Week activities, including next week's awards ceremony.

The moderator was Thomas Perlmann, the Secretary-General for the Nobel Assembly and Nobel Committee and the individual who has the honor delivering the life-altering news to Nobel winners when they are selected to receive the prize. 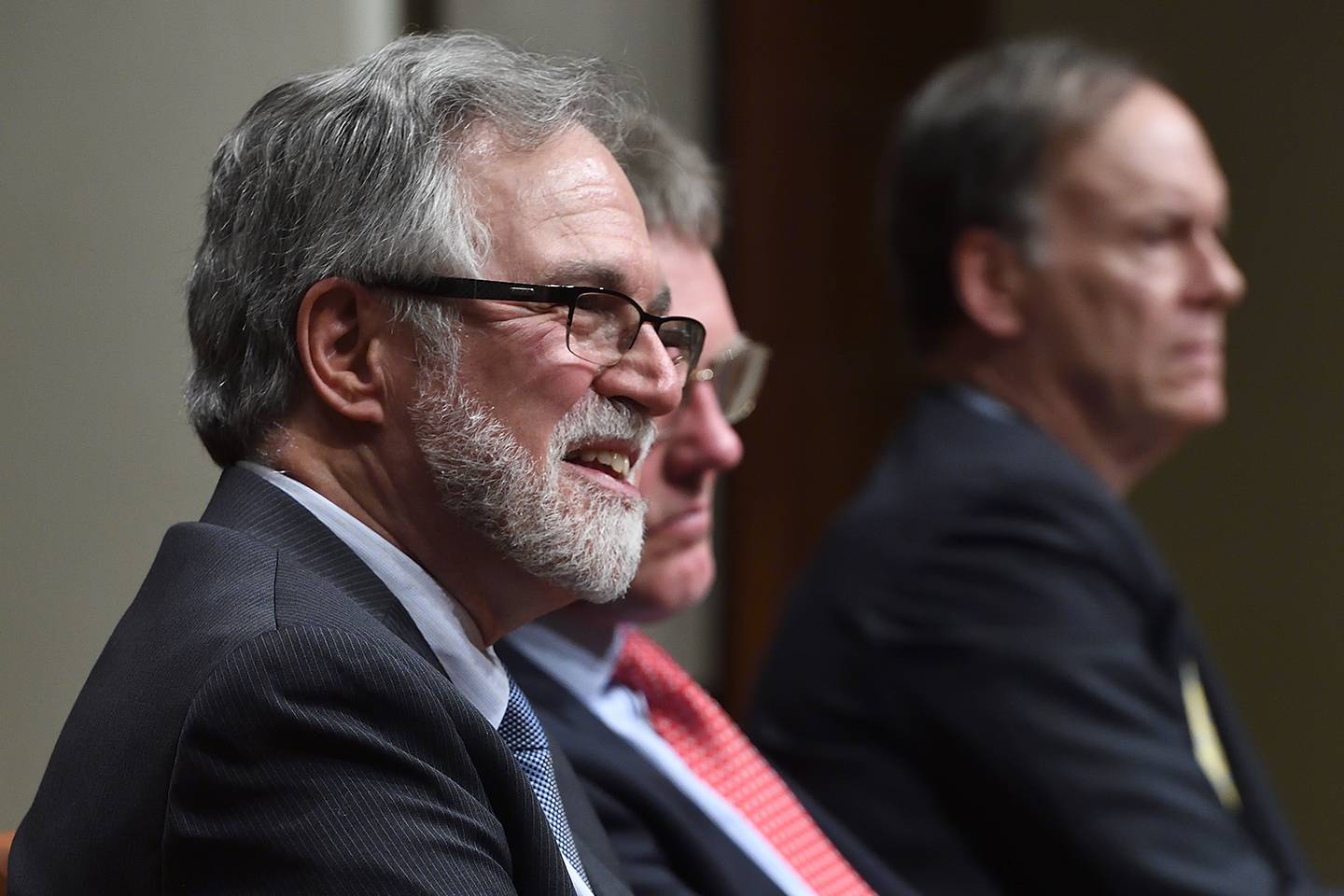 In his opening remarks, Perlmann noted the unusual nature of three physician-scientists winning a prize that had recently gone to purely research scientists. All three on the panel acknowledged the pressures that pull physician-scientists toward one of those roles, to the possible detriment of the other. They said they hoped their success would serve as encouragement for others who choose this career path.

On the joint award for the discovery of how cells sense and adapt to oxygen availability, one reporter asked what made this particular breakthrough so momentous and deserving of a Nobel Prize. Kaelin, who completed his specialist training in internal medicine and oncology at Johns Hopkins before becoming a professor of medicine at Harvard University and researcher at the Dana-Farber Cancer Institute, called it a beautiful puzzle that needed to be solved. He said they were fortunate to be the ones to piece it together.

"All three of us, as we got deeper and deeper into our work, felt that we were on to something important," Kaelin said.

Semenza, too, remarked on the beauty of discovery and the scientific process of connecting the dots from the most fundamental molecular aspects—such as understanding the changes of oxygen levels in cells—to clinical conditions like cardiovascular disease and cancer.

"For a physician-scientist, this was really a dream project," said Semenza, the C. Michael Armstrong Professor of Medicine at the Johns Hopkins School of Medicine.

Ratcliffe wryly added, "Well, I, of course, agree that the committee got it right," he said, drawing a round of laughter. "My horse racing friends tell me that we weren't contenders, and we were running on the outside, not where you want to be. So it's very fortunate that the Nobel Prize Committee doesn't pay attention to bookmaker's odds."

As to how this prize has changed their lives and what it now allows them to do, Ratcliffe said in one sense he expects them all to carry on with their science in the same way, but added he now feels an increased responsibility to champion science.

For Semenza, the award also carries a new responsibility: giving science its deserved moment in the spotlight. "It's a time to tell the general public how basic science discoveries lead to changes in medicine that lead to better lives for everyone," he said. He added that he felt a renewed sense of the importance of inspiring young researchers, realizing that many award-winning discoveries are made by people early on in their scientific careers and that only later is the significance of their discoveries understood.

Semenza underscored the importance of science education and the role teachers play in fostering an interest in science.

"This was my own personal experience," he said, "and I think at least in the United States, teachers should be more highly regarded, and better compensated because they play such an important role in society."

After the news conference, the laureates met with some reporters for one-on-one interviews, while attempting to adhere to their tight schedules. Following his final interview, Semenza was beckoned by some of the National Society of High School Scholars members to pose for a photo. As he walked toward them, other students rushed to cram in for a full group shot, a moment destined to live in many of their Instagram feeds and one that perhaps will inspire a future Nobel Prize winner.