Next week, Johns Hopkins scientist Gregg Semenza—along with William Kaelin Jr. and Peter Ratcliffe—will accept the 2019 Nobel Prize in Physiology or Medicine in Stockholm, Sweden, for discovering the gene that controls how cells respond to low oxygen levels.

In the two months since the award was announced, Semenza has spoken with audiences around the world about the implications of this work in understanding and eventually treating blood disorders, blinding eye diseases, cancer, diabetes, and other conditions. But he's also spoken about the value of basic science.

1) Many of the best discoveries are made by young scientists.

The Nobel Prizes are usually given to older scientists for discoveries they made when younger, and because of this, Semenza says people may think that good science is solely the domain of older people. "We often make these findings early in our careers, but it is only much later that the significance of those discoveries becomes apparent," he says.

A lot of science is about taking small steps forward. Big leaps are often the result of collaboration, Semenza says. For example, when he and his lab identified the HIF-1 gene, which controls cells under low oxygen conditions, they initially ran into problems trying to clone the gene's DNA—part of the process of learning more about a gene's function and other characteristics. He got help from fellow Johns Hopkins scientist Thomas Kelly, who had expertise in a workaround approach: purifying the protein made by HIF-1, which is another way to learn more about the gene and its function in the cell.

3) The best research environments have mentorship and collegiality.

"There are places with very smart people, and there are places where everybody is friendly," Semenza says. "But there are few places with smart people who are almost always willing to help you. When we wrote the manuscript reporting the discovery of HIF-1, we submitted it to top-tier journals, and they did not find it to be of sufficient interest to warrant publication." But that didn't stop him: Semenza got help from Johns Hopkins scientist Victor McKusick, and the Proceedings of the National Academy of Sciences published the paper. It has been cited in more than 6,000 scientific publications.

"In high school, I had a biology teacher who inspired me and others to pursue careers in scientific research by teaching us about the scientists and the scientific process that led to discoveries," Semenza says. "She would often preface her description of a scientific discovery by saying, 'When you win your Nobel Prize, I don't want you to forget that you learned that here.' We need to give more emphasis to teachers and reward them for the work that they do, which makes such a difference in the lives of so many."

5) Basic science research is good for the economy.

"The inventions and discoveries that come out of basic research are critical for the economy, public health, and treating disease earlier," Semenza says. "It is better, both for patients and for the economy, to treat diseases early rather than later, and we need more research to learn how to more effectively treat many cancers."

Gregg Semenza travels to Stockholm later this week to accept his Nobel Prize, and we'll take you along for the journey, from his arrival in Sweden to his Nobel lecture at the Karolinska Institutet to the grand Nobel Award Ceremony and Banquet on Dec. 10. Read the Hub and follow @HopkinsMedicine on Twitter, Facebook, and Instagram for coverage and updates. 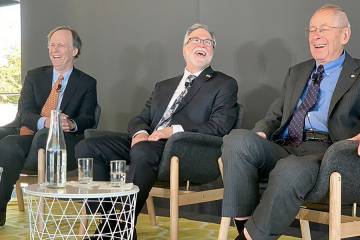 Published Dec 2, 2019
The award has thrust the Johns Hopkins physician-scientist into a global spotlight, and he's taken the opportunity to highlight the importance of science in childhood education 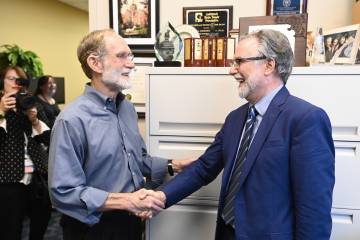