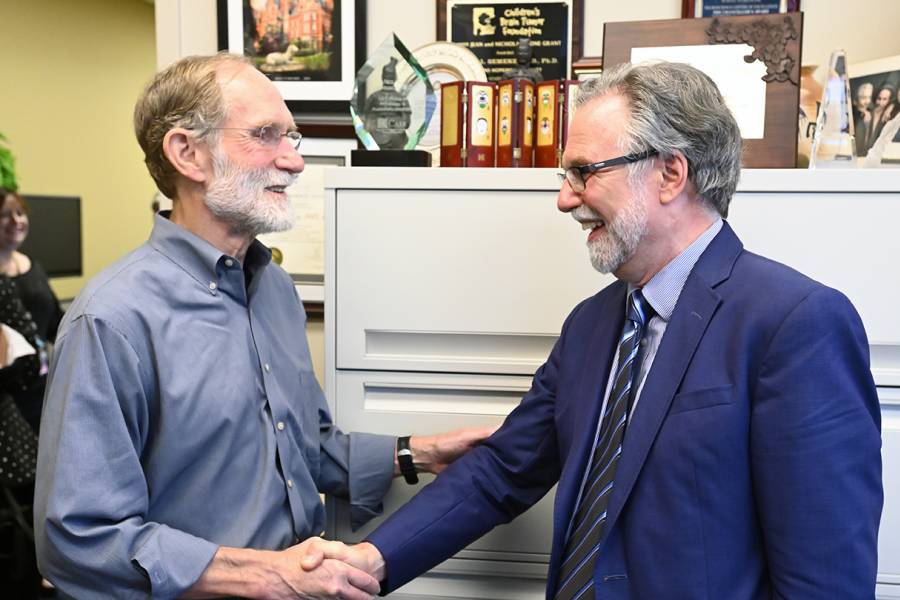 In the very early hours of Monday morning, when the phone rang with the call many scientists spend a lifetime dreaming about, Gregg Semenza slept right through it.

"I'm a deep sleeper," Semenza admitted. "I did wake up eventually, but by the time I got to the phone, it was too late. So I thought to myself, I wonder if this is somebody's idea of a bad joke."

He tried to go back to sleep, he said, but the phone rang again a few moments later. This time Semenza picked up promptly and got the good news—that he was among the recipients of the 2019 Nobel Prize in physiology or medicine.

"I was in a daze and I was kind of half awake," Semenza said Monday afternoon during a news conference on the university's East Baltimore campus. "I was not able to really say much of anything because I was so shocked and surprised. It certainly was not something that I was expecting."

"It turns out that because oxygen is so critical to life, many of the common human diseases have derangements in the ability to maintain proper oxygen levels."
Gregg Semenza
Nobel laureate, Johns Hopkins researcher

Semenza, a professor of medicine at the Johns Hopkins University School of Medicine, was honored for his discoveries of how cells sense and adapt to oxygen availability. He shared the award with Harvard's William G. Kaelin Jr. and Sir Peter J. Ratcliffe of the University of Oxford.

Semenza's groundbreaking discovery of hypoxia-inducible factor 1, or HIF-1—the protein that switches genes on and off in cells in response to low oxygen levels—has far-reaching implications in understanding the impact of decreased oxygen levels in blood disorders, blinding eye diseases, cancer, diabetes, coronary artery disease, and other conditions.

"It turns out that because oxygen is so critical to life, many of the common human diseases have derangements in the ability to maintain proper oxygen levels," Semenza said. "So for example in a cancer, the cancer cells divide very rapidly, consume a lot of oxygen, and become very hypoxic. And what we've learned is that when they become hypoxic, they turn on genes that enable them to invade, metastasize, and spread throughout the body.

"And whereas most of the chemotherapy drugs are designed to kill dividing cells that are well-oxygenated, there are no treatments that are approved to treat the hypoxic cells within the cancer. And we believe it's these cells that survive the therapy and come back and kill the patient."

Semenza spoke to hundreds of assembled colleagues, friends, faculty, students, staff, and reporters at Turner Auditorium, where, after being formally introduced by Johns Hopkins University President Ronald J. Daniels, he was greeted by a lengthy and spirited standing ovation.

A Hopkins faculty member since 1990, Semenza said he shared the award with many others at Johns Hopkins, past and present. He credited the work of "a long list of super postdocs and graduate students and undergraduate students" who have worked in his lab over the years, and also expressed his appreciation for all the support he has received, from Daniels; from Paul Rothman, dean of the medical faculty and CEO of Johns Hopkins Medicine; from David Valle, director of the Institute of Genetic Medicine; and from countless others.

"There have been lots of times when I needed help, and there was always someone on the faculty or the staff here who helped me," Semenza said. "And I've been able to do what I've been able to do here at Hopkins, and I really don't believe that I would have accomplished this anywhere else. That's why I've stayed here my whole career, because I think this is the greatest place to do research. It has the greatest colleagues and the greatest sense of collegiality of any place I know."

Caroline Vissers, a doctoral student in biochemistry, molecular and cellular biology who works in Semenza's lab and is studying breast cancer cell behavior in low oxygen conditions, spoke highly of Semenza's mentorship and his rigorous approach to scientific research.

"It's been really amazing having him as a mentor because it's shaped the way that I approach science, and it's purely asking good questions and doing careful experiments to find the answers," she said. "He really is out to find true discoveries that will impact human life. And I think that's honestly why he won the Nobel Prize. He's worked hard at making sure that the research he does is high-quality and correct. And it has led to this discovery of HIF-1 that turns out to be hugely important in almost every form of medicine."

Daniele Marie Gilkes, an associate professor of oncology at the School of Medicine, spent six years as a postdoc in Semenza's lab, from 2009 to 2015, before starting her own lab that focuses on the role of hypoxia in breast cancer. She noted that Semenza was always supportive of his students and played a key role in encouraging her to stay at Hopkins, where she would have the opportunity to work with some of the best researchers in the world.

"One thing he said about Hopkins is that so many people want to collaborate, and he was right—I made the right choice," Gilkes said. "He embodies that spirit of collaboration—he is more than happy to collaborate and use different forms of technology from different labs. I know a lot of people have knocked on his door to ask him questions."

Among the first to congratulate Semenza on Monday morning was Peter Agre, a Bloomberg Distinguished Professor in the university's schools of Public Health and Medicine and winner of the Nobel Prize in chemistry in 2003.

Agre, who said he has known Semenza for more than 30 years, called the discoveries of Semenza and his co-honorees "fundamental" and "an obvious Nobel."

"I am delighted for Johns Hopkins because back when I won in 2003, it was an eruption of celebration, all the custodial staff and guards and faculty and students—it was wonderful," added Agre, one of four Nobel laureates on the Hopkins faculty. "And this one is so highly deserved, and it's a discovery that is going to change—and has already changed—medicine forever. So I'm honored to be a colleague of Gregg Semenza." 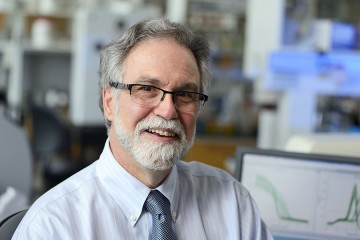