Chelsea Moriarty, who overcame leukemia as a child, combines her interests in medicine and business in new dual degree program offered by School of Medicine, Carey Business School

Chelsea Moriarty's career path started with a diagnosis—one that cast doubt on any career at all.

"I'm a pediatric cancer survivor," she says. "I was diagnosed with leukemia when I was 9 years old."

Moriarty's age and cancer type combined for a poor prognosis, but taking part in an experimental clinical trial saved her life and instilled a drive to help others in a similar situation.

"I want to go to medical school, I want to help kids like me, I want to do better," she remembers thinking at the time. "I grew up in a children's hospital." 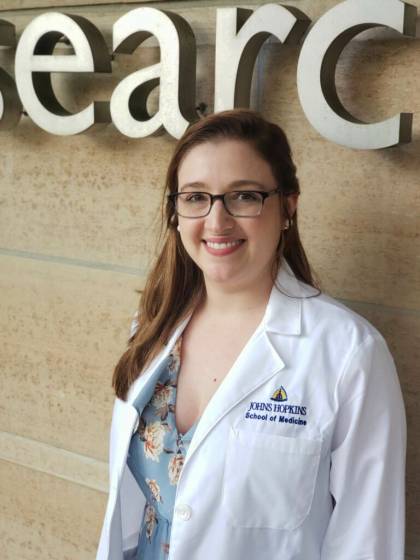 After graduating from Smith College in Massachusetts, Moriarty—the first in her family to earn a college degree—turned her attention to stem-cell cancer research at Baylor College of Medicine, where her interests in medicine and helping others continued to grow.

"I talked to every doctor who would have coffee with me," she says. "In college, I had wanted my own clinic and was a big advocate for universal access to health care. ... When I talked about it, the economics and finance people would be very dismissive: 'Oh, that doesn't work and you don't know enough about economics to understand why.'"

So she resigned to teach herself, pursuing a business background to pair with her medical pursuits. Moriarty was the first person to apply to the new Johns Hopkins MBA/MD program, a five-year program that coordinates curricula from the university's Carey Business School and the School of Medicine to provide business and medical training.

Moriarty has already completed the MBA portion of her degree and is now finishing her first year of medical school at Johns Hopkins. She says the diversity in her business classes was a key to her success and helped her feel more at ease with her own modest background in business.

"Everyone came with such unique experiences that I had something to learn from everyone," she says. "The professors did a really good job of breaking things down so they were easy to understand while challenging us to take our knowledge a little bit further."

"One of the skills I learned in being a leader [is that] being a team player is not disregarding someone's idea, but building off of it."
Chelsea Moriarty

Moriarty recently worked in New Mexico with a Native American tribe, the Jemez, on a deforestation project that was part of the MBA's Innovation for Humanity project. The Jemez had practiced tree-thinning on their ancestral land for generations as a way to avoid forest fires. They were in critical need of a business plan to present to the National Park Service for funding to continue the work. Moriarty and her classmates developed the plan, which a subsequent MBA class will continue to refine.

"It was really good practice in finance, and projections, and in marketing," she says, "working in groups and discovering my strengths as a leader and a team player."

In her Discovery to Market class, Moriarty worked with researchers from the School of Medicine while tapping into her experience with stem cell research. The scientists were working to transform skin cells into fully functioning heart cells; Moriarty served as a scientific liaison, helping the group understand how the science you be turned into a deliverable product.

"We set out their patent plans, what different things they need to do, and defined for them the market need," she says.

During a recent course on health care management, students tackled the challenge of "polypharmacy," or multiple drug prescriptions for elderly patients, that can lead to drug interactions and resultant complications. Moriarty led the brainstorming of ideas on how to identify these patients, then get them off of drugs they no longer need. Moriarty was able to guide the discussion among her classmates, who had no formal business background.

"How can we help patients in a way that's reasonable and sustaining, especially in light of limited resources?" she says. "One of the skills I learned in being a leader [is that] being a team player is not disregarding someone's idea, but building off of it."

In the midst of her studies, Moriarty still finds time to advocate for the Leukemia and Lymphoma Society. She spoke at a recent fundraising event in her hometown of Houston that raised nearly $20,000 for continuing research and outreach programs.

As for the future, her goals are predictably ambitious—and remain true to the vow she made as a young patient.

"At the moment, I'm leaning toward [specializing in] pediatrics, and possibly something in surgery," she says. "A very big long-term goal, I want to be a CEO of a hospital." 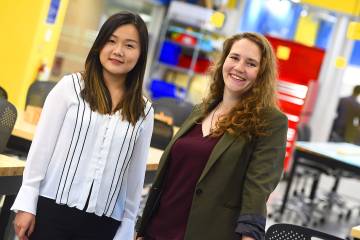