Richard A. Zdanis, an alum went on to serve in the Johns Hopkins University administration and as professor in the Krieger School of Arts and Sciences' Department of Physics and Astronomy for many years, died Sunday from a stroke in Columbus, Ohio, where he lived. He was 83. 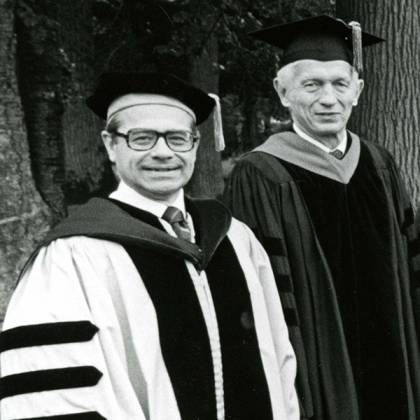 A Baltimore native, Zdanis spent two years at Princeton after earning his doctorate at Johns Hopkins in 1960. He returned to the Hopkins physics and astronomy department as assistant professor in 1962. Celebrated for his research on high-energy physics, he advanced quickly, earning the rank of professor in 1969 and co-chairing the department's high-energy group. He conducted early particle physics research at the National Laboratory at Brookhaven, Long Island, New York, and then moved to the newly completed Stanford Linear Accelerator Center in Palo Alto, California.

Zdanis also served as associate provost of Johns Hopkins from 1975 to 1979; as vice president for administrative services from 1977 to 1979; and as vice provost from 1979 to 1988. As vice provost, he led several significant initiatives, including the sale of the Garrett Coin Collection in four separate auctions from 1979 to 1981. Originally estimated to fetch approximately $8 million, the coins were collectively auctioned for more than $25 million, raising critical funds at a time when the university was facing fiscal difficulties. Zdanis also played a key role in formulating Hopkins' successful response to NASA's request for proposals for the Space Telescope Science Institute. NASA awarded the institute to Hopkins in September 1981.

"Dick Zdanis was a physicist, but he had broad knowledge of other fields of science," said Ross Jones, then-vice president and secretary of Johns Hopkins. "That often made him the go-to person in the university administration for advice and consultation on a wide range of subjects and issues. On a lighter note, others may recall, as I do, his love of coffee. I cannot remember a time, from early in the morning until the end of the day, when he did not have a large mug of coffee in hand."

In 1988, Zdanis moved to Case Western Reserve University as provost, where he remained until retiring in 2000. At Case Western, he was instrumental in the formation of the College of Arts and Sciences and the Case School of Engineering.

Zdanis served on the Space Telescope Institute Council of the Association of Universities for Research in Astronomy, which provides oversight and advocacy for the Space Telescope Science Institute, from 1990 to 1994 and as its vice chair from 1993 to 1994. He served as a member of the AURA board of directors from 1993 to 2000 and as the vice chair of the board from 1994 to 1997. He was an active member of the board of trustees of Associated Universities from 1976 to 1996, including as chairman of the board from 1981 to 1983, and as an honorary trustee from 1996 until his death.

"He had a distinguished career in high-energy physics and university administration," said H. Warren Moos, professor emeritus in JHU's Department of Physics and Astronomy. "He was an advocate at a time when Hopkins was expanding the sciences, and his portfolio was science, so he was a major contributor through his activities in the provost's office."