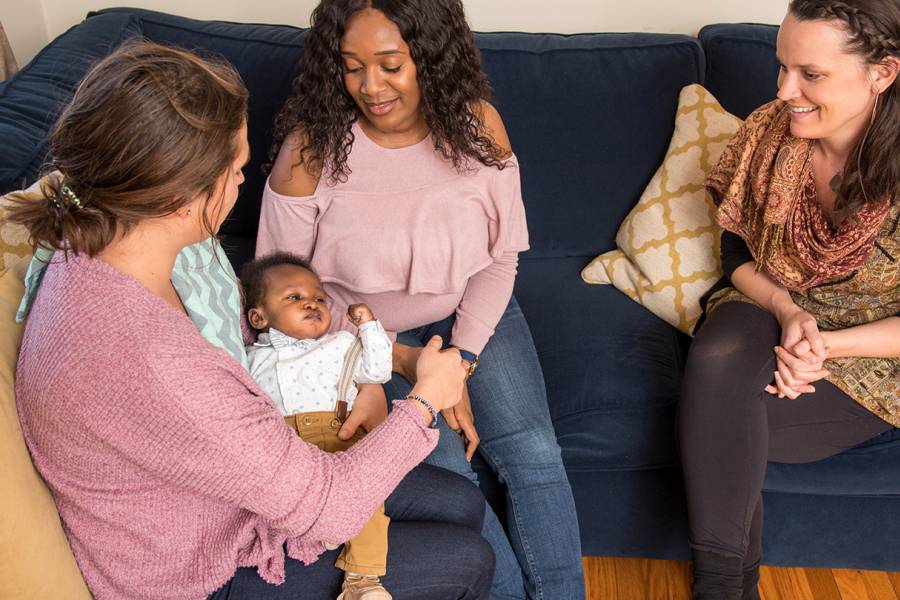 The difference a doula makes

After two hours of pushing, Ashley Fadiora was exhausted, weak, and wondering how on earth she was going to get this baby out. Her husband and her mother, weary themselves, weren't much help.

Then Laura Moro, a Johns Hopkins School of Nursing student and doula, pulled an orange out of her lunch bag and offered it to Fadiora. Too tired to speak, Fadiora nodded.

Moro lifted a segment of orange to Fadiora's mouth. Fadiora, who had barely eaten in the nearly 24 hours since labor began, ate the slice of orange. Then another. And another. About 20 minutes later, her strength restored, Fadiora pushed little Nova into the world—a healthy baby boy.

During a visit to Fadiora's home six weeks later, Fadiora, Moro, and fellow doula Jodie Pelusi shared laughs and tears as they recounted the story of the birth and passed around the baby, dressed in a tiny button down shirt and suspenders for the occasion.

"If you all hadn't been there, I don't know if I would have been able to do it," Fadiora said. 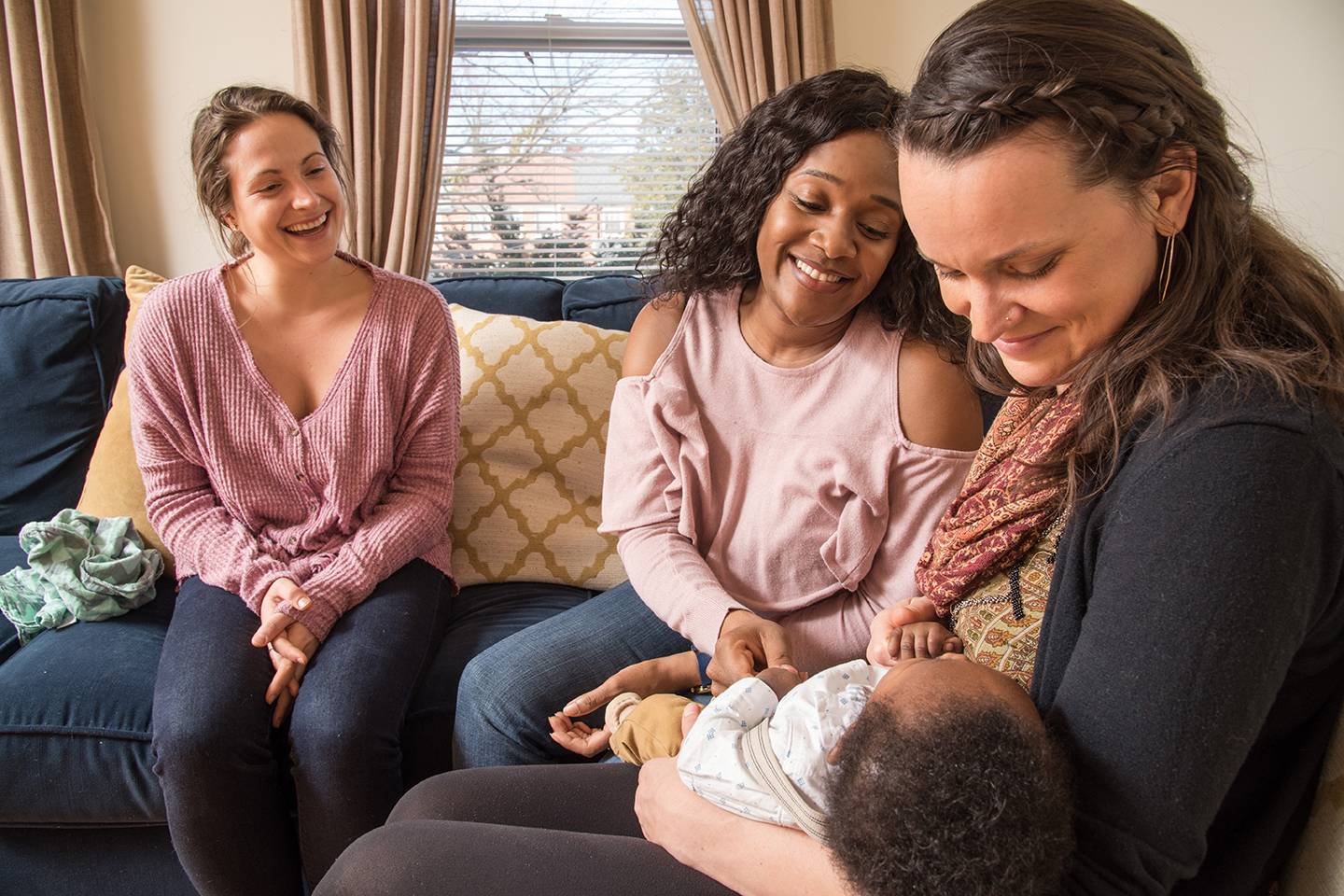 Moro and Pelusi are among the latest crop of students to take part in the School of Nursing's Birth Companions program. For the past 20 years, nursing students who choose to join the program train to become doulas—physical and emotional assistants to laboring mothers—then help with at least one birth.

The benefits of giving birth with a doula's assistance are well-established. A 2017 review of 26 studies involving nearly 16,000 women by Cochrane, a nonprofit network of independent researchers, found that pregnant women who receive continuous support from doulas typically have shorter labors, need fewer medical interventions, and are less likely to have a cesarean section. They're also more likely to say that the birth was a positive experience. Babies born with a doula's help tend to be healthier as well, having higher Apgar scores at birth.

Black women, in particular, stand to benefit from a doula's advocacy—they are more likely to begin pregnancy with health problems and are more than three times more likely to die during childbirth or in the postpartum period than their white counterparts.

But the cost of hiring a doula can be prohibitive—about $1,000 per birth in the Baltimore region—and most insurance plans don't cover the service. As a result, many poor women, young women, or single mothers are unable to afford a doula's services.

It was with these disparities in mind that a group of Hopkins nursing students created the Birth Companions program, said Laura Lucas, clinical coordinator for the masters in nursing program. Over the years, Birth Companions has grown into an elective course at the nursing school. Some students opt to complete an additional training and certification from Dona International, a professional organization for doulas.

"Many of the students are geared toward midwifery or pediatrics, but some of them are just curious about birth," Lucas said.

Some 1,200 students have completed the course since its inception and helped with more than 2,300 births in Baltimore and beyond, Lucas said. They meet with expectant mothers in the final months of pregnancy, help them draw up a birth plan, accompany them to the hospital or birthing center, provide support throughout labor and delivery, and check in with the mother a few days after the birth.

The service is provided to expectant mothers for free. Volunteers with the Birth Companions program distribute information about it at clinics and health fairs, and to nonprofits that serve low-income, immigrant, and refugee families. However, many clients hear about the program through word-of-mouth. There are no income requirements for participants, and many are middle-class, highly educated women, like Fadiora, who have learned about the benefits of giving birth with a doula.

Students receive a small stipend from the nursing school for assisting with a birth. But the true value of the program, graduates say, are the lessons learned by helping women through some of the toughest, and most profound, days of their lives.

"So many techniques I learned, both physical and emotional, are useful to what I do now," said Margaret Schultz, a 2015 School of Nursing graduate who is now a labor and delivery nurse at the University of California San Francisco Medical Center. "You learn the importance of physical touch, a smile, an encouraging tone. I work with many patients who don't speak English, and those little things can really help put them at ease."

Maddie Breer, a 2017 graduate who now works at a birth center in Golden, Colorado, said the Birth Companions program helped her discover her passion for helping expectant mothers.

"I remember working with a single mother whose first birth had been really traumatic," said Breer, who is currently training to become a midwife. "She wound up having a really beautiful birth with the second, and I could tell that having a doula with her was a huge source of emotional support. When I met with her after the birth, it was like she was a different person. It seemed like a lot of the trauma from the first birth had left her. And that was when I was like, 'This is what I was meant to be doing.'" 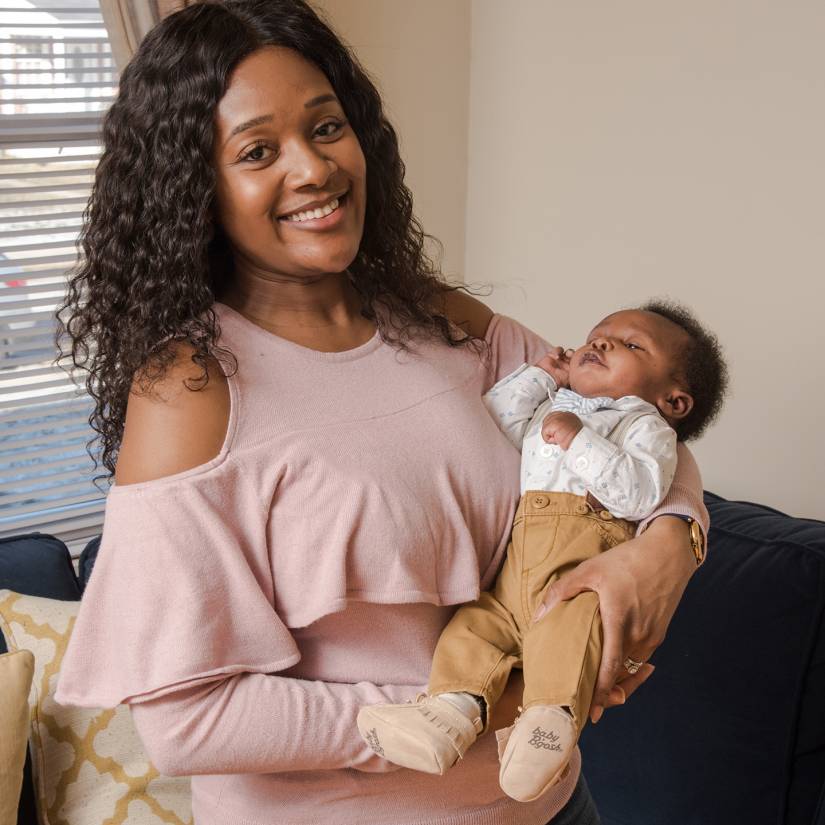 Moro and Pelusi, the student doulas who assisted Fadiora, are former Peace Corps volunteers who worked in maternal and child health overseas. Moro, a 28-year-old from Massachusetts, is interested in working in women's health, pediatrics, or labor and delivery.

Pelusi, 29 and from Pittsburgh, also wants to work in women's health after graduation. She said the Birth Companions program was one of the most personally meaningful experiences she had during nursing school.

"This is the first time I was really able to form a one-on-one relationship with a patient and get to know her over time," she said.

For Fadiora, having the support of the student doulas allowed the birth of her first child to be everything she hoped for. A social worker and self-described "over planner," she had researched the benefits and risks of birth interventions and determined she wanted to give birth without pain medications. She chose to give birth with midwives at Special Beginnings, a standalone birthing center about 45 minutes from her home in Northeast Baltimore. After seeing the statistics about the benefits of doulas, she knew she wanted to work with one.

"I'm usually a person who does well under pressure, but I wasn't sure how I was going to hold it together" during birth, she said. Her husband Amos, a business analyst, was supportive of the idea. The couple sat down with the doulas a few weeks before the birth, talking about their hopes for the experience.

Despite Fadiora's many checklists and preparations, the birth didn't go quite as planned. She became very nauseated as labor began and vomited for several hours before she, her husband, and her mother embarked on what felt like an endless drive to the birth center. Once there, she climbed into a birthing tub and a nurse hooked her up to an IV to replenish lost fluids.

Moro and Pelusi arrived soon after, but Fadiora, deep in labor, didn't notice them at first. All through the night, the doulas provided encouragement and support for Fadiora as she experienced each contraction and eventually began to push. Exhausted themselves after long days of clinical rotations, the doulas took turns napping. Moro snoozed next to Fadiora on the bed for a bit. Pelusi curled up on the floor on a scarf.

"You all reminded me to keep breathing," Fadiora said to the doulas as they sat around her living room. "My mom couldn't have done that. My husband certainly couldn't have without you. Your presence really helped him relax, too."

For Fadiora, the hardest part came when she realized she had been pushing for more than two hours. "That's when I started to cry," she said. "I knew I had been there a long time and I started to wonder what would happen if I was too tired to do this."

It was then that Moro reached into her bag for the orange.

"My mom said later she couldn't believe I let you feed me the orange," Fadiora recalled. "That was so unlike me. But it worked!"

She says she'll always remember the sense of triumph she felt when Nova emerged.