The interactive concert, held in partnership with advocacy organization The Musical Autist, is designed to appeal to people with neurological differences 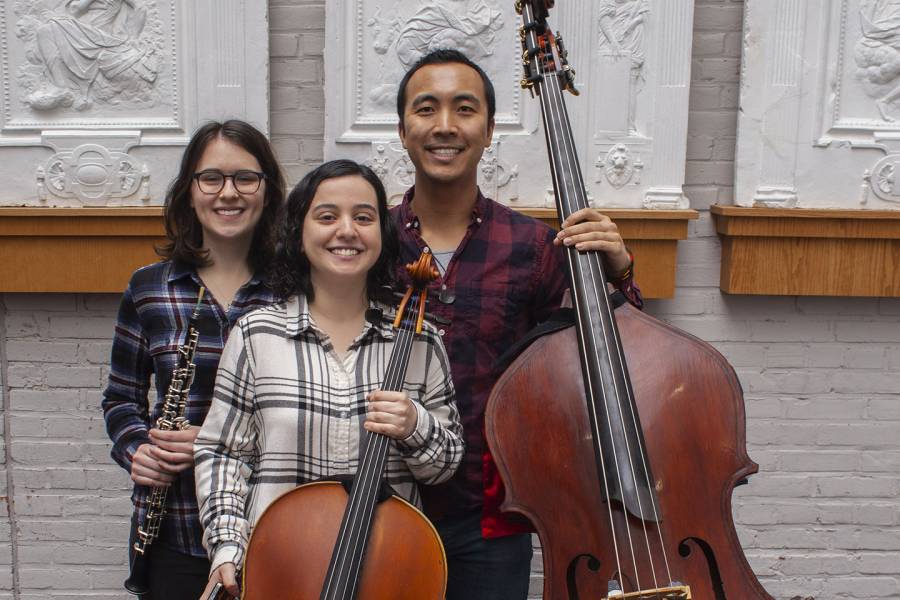 The members of the Bulliet Trio are taking turns talking about their instruments. Yoshiaki Horiguchi mentions the low tones of the bass and plays a bit of Camille Saint-Saens' "The Elephant" as an example. Ellen Gruber discusses how the oboe can sometimes quack like a duck and goes through a bit of Sergei Prokofiev's Peter and the Wolf as a demonstration. And Mafalda Santos talks about her cello's wide range of sound, playing a little Bach to showcase its expressive range.

While they take turns speaking during this rehearsal in a Peabody Institute classroom, adjunct faculty member Kerry Devlin politely jumps in here and there with questions and comments. Could you speak a little slower and clearer? Could you show off the tonal range of your instrument there? How does an oboe sound like a duck? Her performance notes help prepare the student ensemble for its Sensory Friendly Concert, which takes place Sunday in Peabody's Joe Byrd Hall.

The concert is an inclusive performance for audience members with neurological differences who may be more sensitive to a conventional concert hall environment. It is presented in partnership with The Musical Autist, an Annapolis-based arts and advocacy organization that organizes concerts that provide accommodations for audience members who are on the autism spectrum and spotlights autistic musicians. The Bulliet Trio shares this weekend's program with guest performances from local musical autists and The Musical Autist troupe.

This concert is The Musical Autist's first in Baltimore and the first sensory-friendly concert for Peabody. During the performance, volume levels will be low and the lighting will be soft, there will be no public-address amplification, and audience members will be encouraged to approach the stage. A quiet room will be available in case an audience member needs a break from the concert.

A call for musicians was put out to Peabody artists, and the Bulliet Trio was selected.

"We were looking for a group that had a really personable stage presence and would feel comfortable interacting with many different kinds of audience members," says Devlin, a board certified music therapist who works with The Musical Autist and collaborated with Peabody to bring the concert to the conservatory. "At an event like this, the audience is going to be immersed in listening to and experiencing the music in a different kind of a way, an active way. So you have no choice but to engage with your audience, who might shout out a question, who might come up and try to touch your instrument while you're playing, who might come and lay at your feet to feel the vibrations from that really big double bass. There's going to be people who are non-speaking or who really need to move around the space in order to experience the music, all the way up to adults on the spectrum who want to sit and close their eyes and enjoy the concert."

As part of the afternoon rehearsal, Devlin set up a FaceTime conversation for Gruber, Horiguchi, and Santos with Sunny Cefaratti, co-director of The Musical Autist and autistic self-advocate. Cefaratti talked about the assumptions made about people on the spectrum as a prelude to talking about possible ways to interact with the concert audience. She also asked about the Bulliet Trio's repertoire for the concert, which includes their introductions and pieces by Joseph Haydn and Astor Piazzolla, as well as their arrangements of Queen's "We Will Rock You" and "We Are the Champions" and Walk the Moon's "Shut Up and Dance."

"Our program is to allow any kind of expression," Santos says. "I think there's going to be moments of just listening, moments of clapping along, moments of moving around. We don't want to adapt to this audience, we want to add more things to make it more accessible."

"At an event like this, the audience is going to be immersed in listening to and experiencing the music in a different kind of a way, an active way. So you have no choice but to engage with your audience."
Kerry Devlin
Neurologic music therapist

A shared interest in making music more accessible by taking it out of the concert hall is what brought the members of the Bulliet Trio—Gruber and Santos, both Peabody undergraduates, and Horiguchi, a graduate student and Peabody Preparatory instructor—together.

"Classical music can be stifling sometimes," Gruber says. "We wanted to try to make it so people could listen to it easier and have more fun."

They arrived at that place through their own musical experiences. Horiguchi taught with OrchKids, the Baltimore Symphony Orchestra's program that works for social change through music. He also performed with inventive musical projects such as the live hip-hop improvisation collective Baltimore Boom Bap Society and Classical Revolution, which produces concerts in museums, pubs, parks, and cafés.

Gruber worked at her high school's summer music camp with children on the autism spectrum the summer before entering Peabody. And Santos tours with the Peabody Peled Cello Gang, the student ensemble led by Peabody faculty cellist Amit Peled that aims to bring classical music to people who normally don't get to hear it.

"I think each person's relationship with sound is such a personal thing," Horiguchi says, pointing out that he grew up listening to a wide range of music but typically only heard classical music at the concerts where he performed. "You never really know what kinds of sounds or beats or rhythms or melody will strike a person and inspire them to move and create and maybe do the same thing. As someone who didn't have a whole lot of money growing up, I didn't really go see classical music concerts very often because tickets were pretty expensive. So when [Santos] came back from tour with the Cello Gang, she started talking with Ellen and me about how pumped she was about bringing music to different communities and the power that it has in connecting people."

Devlin appreciates that the Bulliet Trio, and the students in her Music and the Neuro-Diverse Learner class, recognize that changing the context of classical music is about broadening and building the audience rather than making allowances for specific groups.

"Something that makes me really proud is to see my music education students come to class eager to learn about different kinds of disabilities and different accommodations that they can provide," she says. "It is wonderful to see them begin to understand that teaching in accessible ways to all kinds of learners—visual learners, auditory learners, kinesthetic learners—that's just good teaching pedagogy."

The Sensory Friendly Concert will be performed at 2 p.m. on Sunday, April 7, at the Peabody Institute's Joe Byrd Hall. For more information, visit peabody.jhu.edu/events.