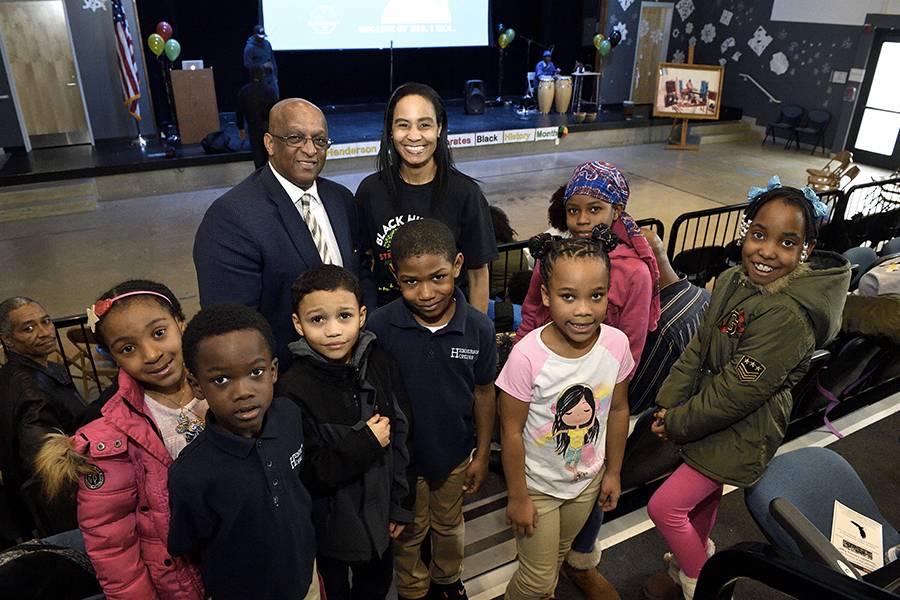 For 400 years, rich storytelling traditions have brought together African-American communities, strengthening ties even in the face of outright bans on cultural expression.

Many of those traditions were on dazzling display last week during Storyteller Literacy Night at Elmer A. Henderson: A Johns Hopkins Partnership School, held in celebration of Black History Month. More than 200 students, family members, and guests turned out for the event, bearing witness to the power of storytelling to summon, inspire, and unite.

Emceed by PTA President Tameka Suber, the event reinforced connections between generations and convened a constellation of Baltimore-area storytelling talent, including Tyrone "Tre" Vincent III, a fifth-grader who is already a published author and entrepreneur, and community leader Melvinda Simms Jones, grandniece of Elmer A. Henderson, the school's namesake.

"This isn't just a school event; this is a community event," said Principal Peter Kannam. "Henderson-Hopkins is buttressed in the community to be a hub for celebrating the brilliance in our community as well as the brilliance of our students."

In prepping the audience for the evening, Keyma Flight, a young poet with the organization Dew More Baltimore, offered a primer in spoken-word etiquette: "To give energy to the stage and to the person speaking, snap your fingers when you a hear a line of rhythm that you like." From that moment on, the sound of snapping fingers added fresh urgency to the frequent applause.

Fittingly, the theme of hands—as symbols of forced labor as well as engines of creative expression—recurred throughout the evening.

Reading her poem "A Coil Called Skin," Denise Kumani Gantt, playwright and director of education at the Modell Lyric, gave voice to the hardships and unsung contributions of countless African-Americans: "My handprint everywhere and my signature invisible / and I cannot remember and I cannot forget / what happened here in America."

In another segment, Henderson-Hopkins parent Alexandria "Brinae Ali" Bradley, artistic director of the youth-based dance outreach program Tapology, presented tap dance as an artistic form with its own remarkable story.

"At one point in our history, the drum was banned," Bradley explained as she syncopated in an undercurrent of rhythm with her tap shoes. "The drum could be used as a secret means of communication, for people to get free. As a penalty, you could have your hands cut off. But you know, we're a very clever people, so we found other ways to communicate."

Bradley's ensuing tap dance, in which she was joined by her daughter Malaika, a third-grade student and a fourth-generation tap artist, was one of the exuberant highlights of the event.

Perhaps the biggest hand of the evening went to longtime Baltimore City activist Melvinda Simms Jones, whose account of her granduncle, Elmer A. Henderson, connected the community to the life and work of their school's namesake.

Born in 1887, Henderson started his education in a one-room school in a church basement in Baltimore County. He rose to prominence as an educator during a turbulent period of segregated education to become the first African-American to serve in a superintendent role for Baltimore City schools. In honor of his legacy, on May 8, 2012, the Baltimore City School Board voted to rename the East Baltimore Community School in his honor.

Capping off the storytelling, Janice Curtis Greene, whose stage name is Janice the Griot, enthralled the audience of Henderson-Hopkins Eagles with a made-to-order tale of a young eagle who learns to soar. Known for her historical portrayals of African-American women such as Harriett Tubman and Rosa Parks, Greene is also president of the National Association of Black Storytellers. Her rousing story was a perfect fit for a school that strives to nurture students who "SOAR" as scholarly, open-minded, accountable, and relentless learners.

After the presentation, families, staff, and special guests transitioned to one of the school's large "cluster" areas to select free books, talk to the evening's storytellers, and enjoy a community dinner. Then, as the evening wound down, students, family members, and special guests alike stopped by the school's expansive art room to add their own handprints to a mural-sized work of community art.