National and local leader in education named principal of Henderson-Hopkins

Peter Kannam, an educator with 25 years of experience, has been tapped as the new principal of the Baltimore City-Johns Hopkins partnership school

Peter Kannam, senior adviser and co-founder of the national education nonprofit America Achieves, has been selected as the new principal of Elmer A. Henderson: A Johns Hopkins Partnership School. Kannam was confirmed as principal by a vote of the Baltimore City Board of School Commissioners on Tuesday, July 24, and assumed leadership of the school on Wednesday, July 25. 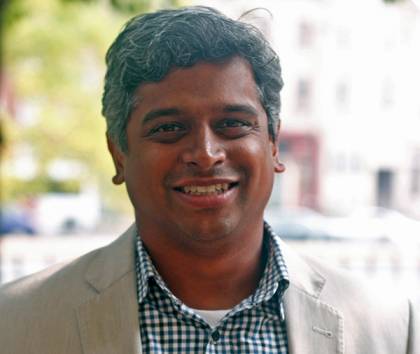 Henderson-Hopkins is a contract school of the Baltimore City Public Schools System operated by the Johns Hopkins University School of Education in partnership with Morgan State University. Opened in 2014 as East Baltimore's first new school in more than 20 years, Henderson-Hopkins and its shared community spaces serve a growing population of families living and working in and around Eager Park, which is a $1.8 billion, 88-acre community revitalization project north of Johns Hopkins' East Baltimore campus also referred to as EBDI.

"In Peter Kannam, we have an experienced educator with vital knowledge of the school system, a longtime commitment to excellence in City Schools, and a solid background as a proven education innovator," said Christopher Morphew, dean of the Johns Hopkins School of Education. "I have tremendous confidence in his abilities, his dedication, and his passion."

A longtime Baltimore City resident with 25 years of experience as an educator, Kannam was selected to lead the school after an extensive national search.

"I'm thrilled to join the team at Henderson-Hopkins, where we are committed to delivering on our promise to create an excellent education for our students in East Baltimore, a vision that includes fostering a diverse and active community dedicated to supporting students and families," Kannam says. "The Henderson-Hopkins mascot is an eagle, and I believe that in this next chapter, together we'll soar."

Kannam began his career as a teacher at Baltimore's Lombard Middle School, where he taught science and U.S. history for five years and spent two years in a special education inclusion classroom. After receiving his master's degree in school administration and supervision from the Johns Hopkins School of Education in 1999, he became executive director of Teach For America Baltimore, supporting City Schools in the recruitment, selection, and training of incoming TFA teachers. He also served for four years as executive director of New Leaders for New Schools Maryland, where he launched programs to recruit and train principals for Baltimore City and Prince George's County school systems; and as New England regional director for Catapult Learning.

In 2010, he co-founded the education nonprofit America Achieves, which partners with organizations to create clear pathways for economic advancement and civic engagement. He served as both senior adviser and managing partner to develop leadership fellowship programs and educational tools for city and state governments.

In July 2013, Kannam was appointed to the Baltimore City Board of School Commissioners, chairing the Teaching and Learning Committee and serving as a member of the Policy and Strategic Planning committees. He was elected as the board's vice chair on July 25, 2017, a position he held until June of 2018.

"Peter Kannam sees the principalship of Henderson-Hopkins as the next, logical chapter in his commitment to improve education in Baltimore," said Patricia L. Welch, dean of the Morgan State University School of Education and Urban Studies, and board chair of East Baltimore Community School, Inc. "We are excited to see how he can translate what he has learned, as both a teacher and a leader of education organizations, to directly support students in need in Baltimore."

Kannam and his wife, Sonya, also a longtime City Schools educator who is now a librarian at Hampstead Hill Academy, are the parents of three City Schools students, ages 13, 16, and 19, one of whom is a recent graduate of Baltimore City College. 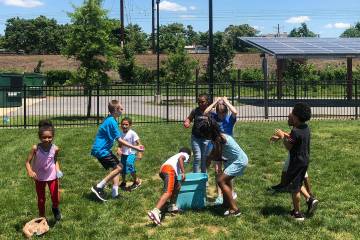 A big day in East Baltimore