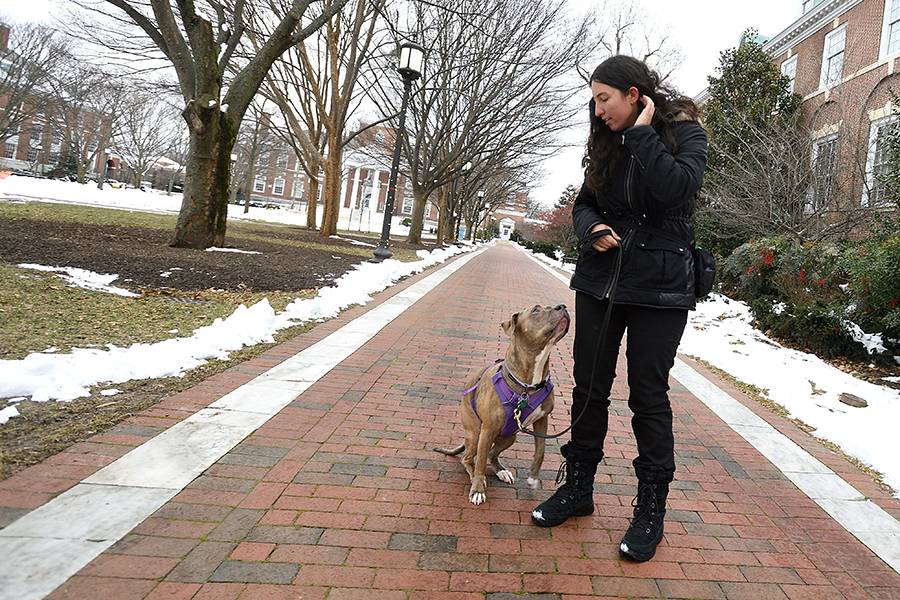 Image caption: Rachel Sherman, and her dog, Misty, on the Wyman Quad.

You already know that your dog is a mix of mailman-alert hound, couch-potato terrier, dirty-sock retriever, and squeaky-toy destroyer. But if you want to get a little more scientific, there are tests for that, and now there's an Intersession course at Johns Hopkins exploring the computer science that makes the tests tick.

The course, What's in a Mutt: An Intro to Dog DNA Analysis, is taught by Rachel Sherman, a PhD student in the Whiting School of Engineering's Department of Computer Science. She designed the course as a way for her 15 students—even those with no formal coding experience—to learn the computational techniques used to determine a dog's breed from its DNA sequence, then apply them to determine the genetic makeup of a mutt.

It turns out that mutts are a doggone good hook to get people thinking about genomics.

"A lot of the techniques that are used for dogs are not the kind of cutting-edge technologies we use for human genome research, but they're the same technologies that 23andMe or Ancestry.com use to look at human ancestry," Sherman says. "So the course is covering a lot of the same methods, but in a fun way."

Dog DNA is a booming business—for instance, Mars Inc. says that it has tested more than a million dogs with mail-order Wisdom Panel kits that cost $84.99 for breed determination or $149.99 to determine the breed but also screen for more than 150 genetic conditions.

You can find out your mutt's breed and her propensity for certain doggie diseases, but do you really want to know? Test results may raise more questions than they can answer, Sherman says, so in tandem with the science used in testing, Sherman and her students are considering some of the related ethical quandaries, such as a case mentioned recently in The Atlantic in which a dog owner discovered through testing that her pet carried the genetic marker for a crippling disease and had the dog euthanized to spare it any future suffering, when the dog may have had something altogether different and treatable. 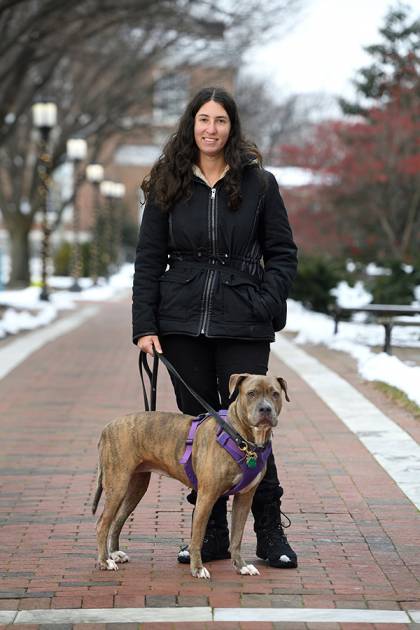 Image caption: Rachel Sherman, and her dog, Misty, on the Wyman Quad.

"That's why it is somewhat regulated in humans—dog sequencing just isn't really regulated in that way at all," Sherman says. "We had a class discussion about whether there should be regulations in place, and how much of an issue this is. We also started talking a bit about whether this is just an issue for medical testing, or if it's also an issue for breed testing. There is breed specific legislation out there, and if you start breed testing, how does that play in legally? Could this be problematic if suddenly landlords are trying to kick out their tenants because their dog is 20 percent pit bull?"

The course combines Sherman's lifelong love for animals—she rescued her own mutt, Misty, two years ago from the Maryland SPCA in Baltimore's Hampden neighborhood, where she's also a volunteer—with her academic pursuits. She studies computational biology in Steven Salzberg's lab where she works to find genetic variations between people by looking at large amounts of data.

Like Sherman, senior Angelica Walker says she loves dogs and plans to adopt one in the fall after she moves into an apartment. Walker is double majoring in computer science and molecular and cellular biology and is very interested in computational biology: As a summer intern at Oak Ridge National Lab in Oak Ridge, Tennessee, she worked with transposable elements in the human genome and cell wall genes in poplar trees. As an undergrad researcher at Carnegie Institution for Science, she's currently working with bacterial genome evolution within the gut of fruit flies. But this is her first experience with dog genomes.

"In this class, we've learned that out of the general public, only 25 percent of people can correctly guess a dog's breed, and among those who work with dogs in their profession, they still only correctly guess dog breeds 28 percent of the time," Walker says. "Mislabeling a dog in a shelter has a significant impact on their adoptability, so I feel like determining a dog's breed can really make a difference in shelters."

For Sherman, the course also represented a venture into unknown territory: it's her first time teaching.

"It's a good experience for me to figure out if this is something I might want to do long term," Sherman says. "This could be a really great thing to turn into a longer course. Wouldn't it be cool if we could actually take a dog and sequence it, and use that data and go from start to finish, from collecting the data to analyzing it? That was way too much for an Intersession course, but I could turn this into a full course in collaboration with people in biology or biomedical engineering who have wet labs. But we'll see how the Intersession course goes first." 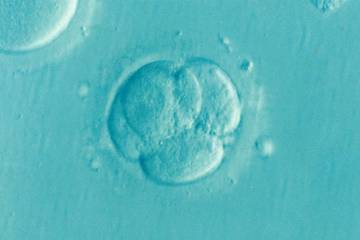 Published Jan 17, 2019
Students debate the ethical issues surrounding the recent birth of genetically altered twins who were designed to be HIV-resistant