O'Connor, a 1951 Johns Hopkins University graduate and emeritus trustee, gave generously to his alma mater over the years 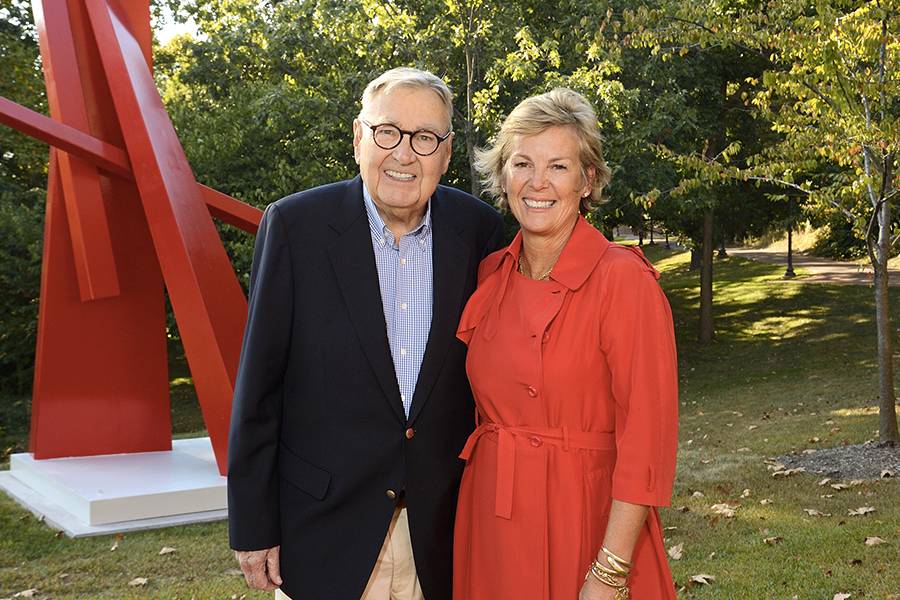 Image caption: Ralph O'Connor and his wife, Becky, are pictured with the Red Sails sculpture they donated to the university in 2013.

Ralph S. O'Connor, an entrepreneur, civic leader, philanthropist, and Johns Hopkins University alumnus who was an enthusiastic supporter of student life at his alma mater, died Sunday at his home in Houston. He was 92.

O'Connor, an emeritus member of the university's board of trustees, gave generously to Hopkins over the years in support of financial aid, endowed faculty chairs, athletics, and awards for teams of undergraduate entrepreneurs. He also provided the lead gift for the state-of-the-art Homewood campus recreation center that bears his name.

"The quintessential Blue Jay, Ralph had a penchant for dreaming big in business, in philanthropy, and above all on behalf of Johns Hopkins," JHU President Ronald J. Daniels said. "Through his support for scholarships and professorships, his commitment to our students' potential whether they were building a startup or breaking a sweat at the O'Connor Rec Center, and his boundless belief in his alma mater, Ralph's impact will be felt for years to come."

O'Connor was born in 1926 in Pasadena, California, and earned a bachelor's degree in biology from Johns Hopkins in 1951.

"The quintessential Blue Jay, Ralph had a penchant for dreaming big in business, in philanthropy, and above all on behalf of Johns Hopkins."
Ronald J. Daniels
President, Johns Hopkins University

After graduating, he joined the booming oil business in Texas, and it didn't take him long to find success, particularly in the practice of wildcatting—drilling exploratory wells in areas not known to have oil.

His instincts were so good and the results so impressive that by 1964, O'Connor had risen to become president at Highland Oil. He later became chairman, president, and CEO of Highland's successor, Highland Resources Inc. The company's holdings included oil and gas, real estate, agriculture, a railroad, and a beer distributorship.

O'Connor was among the four original partners who acquired the NBA's San Diego Rockets and brought them to Texas as the Houston Rockets in the late 1960s. In 1987, he formed the Ralph S. O'Connor & Associates investment firm, of which he was chairman and CEO.

O'Connor, a member of the football and basketball teams during his freshman and sophomore years at Hopkins, believed deeply in the power of sports and physical activity to change people's lives, a belief reflected in his giving. The 63,000-square-foot O'Connor Recreation Center, which opened in 2002, includes a weight room, fitness room, a 30-foot climbing wall, racquetball/squash courts, and an 18,000-square-foot gymnasium that is used for basketball, volleyball, and badminton.

A recent gift from O'Connor will fund a significant expansion of the rec center's physical space as well as its programming, with plans for mindfulness classes, restorative yoga, and other offerings that focus on student well-being.

"Not everyone can play varsity sports, and this facility will provide superb space for intramural and informal competitions," O'Connor said in 1999, when his initial gift in support of the rec center project was announced. "Such activities make better students and better people." 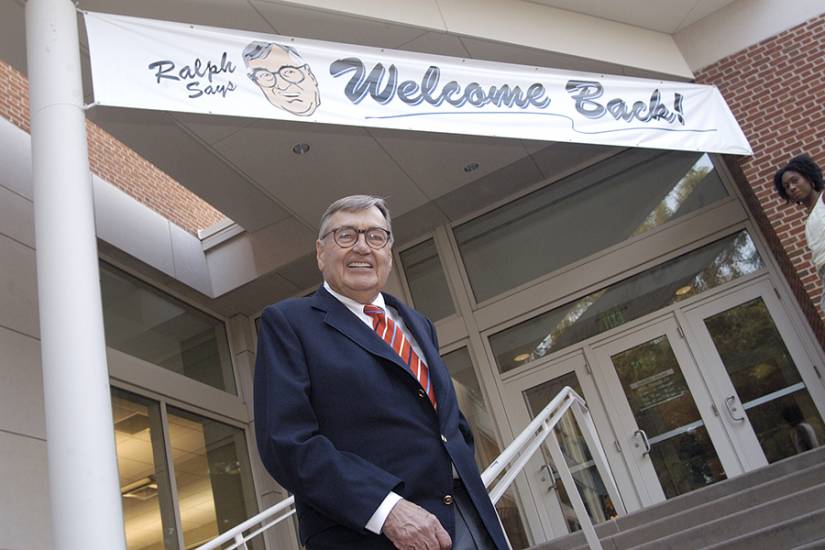 Image caption: Ralph O'Connor poses for a photo in front of the university's O'Connor Rec Center in 2005.

At a reunion not long after the rec center opened, O'Connor was riding across campus in a golf cart with his wife, Becky, when a couple of students asked for a lift. O'Connor invited them to hop in, and during the ride, he asked what they thought of the new O'Connor Rec Center. The students never knew who he was, but they raved about it. O'Connor beamed with pride.

Recently, O'Connor supported projects to construct or renovate a number of athletic facilities, including the Cordish Lacrosse Center, Babb Field at Stromberg Stadium, the Blue Jay tennis courts, and Homewood Field. In April, he was the inaugural recipient of the Distinguished Service Award in recognition of his outstanding contributions to JHU's Department of Athletics and Recreation.

"Ralph O'Connor was a great fan and friend of Hopkins Athletics and Recreation who took tremendous pride in seeing the Blue Jays succeed both on and off the field," Johns Hopkins Athletics Director Alanna Shanahan said. "Countless Johns Hopkins students and student-athletes have benefitted, and will continue to benefit, from his vision and generosity. He will be greatly missed."

O'Connor's financial contributions to Hopkins extended well beyond athletics and recreation. He established a scholarship fund for undergraduates at the university's Krieger School of Arts and Sciences, and a chair in the Department of Biology bears his name. His support was vital to the creation of the Walter J. Stark Chair in Ophthalmology in the School of Medicine and the Ralph S. O'Connor Undergraduate Entrepreneurship Fund, which provides funding, mentorship, and business resources to students developing innovative technologies or ventures.

In 2013, O'Connor and his wife donated the monumental, 35-foot John Henry sculpture Red Sails that sits on the university's Homewood campus, adding to the university's rich and diverse collection of public art.

O'Connor served on numerous civic and educational boards, including as chairman and president of the Marian and Speros Martel Foundation of Houston for two decades. He also served as director of the American Petroleum Institute, as chairman of the board of Oldfields School in Maryland, and as a trustee of Rice University in Houston.

O'Connor was a Johns Hopkins University presidential counselor and a 1981 recipient of the university President's Medal for exemplary service.

He received an honorary degree from Hopkins in 2017 "for supporting the entrepreneur, scholar, and athlete in all of us." Though O'Connor wasn't able to attend the universitywide commencement in Baltimore, two of his grandsons were there to accept the honor on his behalf. O'Connor watched a livestream broadcast of the ceremony from his home and was greeted by the graduating class with a resounding, "Hi Ralph!" University leaders later presented him with the degree in Houston in front of his family and friends.