Researchers to study differences in how men, women respond to flu shots

For the millions of Americans who go through the annual ritual of getting a flu shot, the process is usually a quick and easy one: sign a form, needle in the arm, then out the door.

A team of researchers at Johns Hopkins wonders why this standard practice fails to account for one critical factor—the biological differences between women and men.

The experts from JHU's Bloomberg School of Public Health, led by Sabra Klein, have a body of research behind them establishing the significance of biological sex and age in immune responses to the influenza vaccine. With the help of a new $8 million grant from the National Institutes of Health, they're digging deeper into these variables. 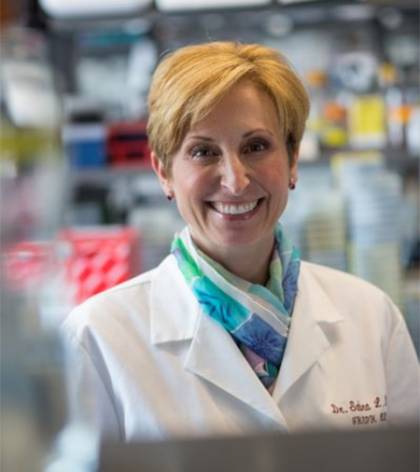 "Ultimately our goal is to better understand whether these standardized approaches of one-size-fits-all for flu vaccines really work, and whether our biological sex is a factor that needs to be considered," says Klein, an associate professor of molecular microbiology and immunology at the Bloomberg School.

The NIH grant will establish a new specialized research center at Johns Hopkins over the next five years, which will conduct three major studies in addition to offering further research and education opportunities for grad students and junior faculty. Researchers are calling the effort SADII—pronounced "Sadie," and short for Sex and Age Differences in Immunity to Influenza.

Despite the effectiveness of vaccines, influenza remains a notable public health concern in the U.S., causing an estimated 100,000 hospitalizations and 30,000 deaths per year.

Increasingly, researchers have pinpointed sex and age as critical variables influencing flu virus infections and responses to vaccines. Klein's recent studies, for example, have demonstrated that females tend to develop notably higher immune responses to the vaccine than males—findings that suggest that men may need a boost.

"What if we start to make sex-specific doses and formulations?" Klein says, pointing to the broader policy implications of this work.

Though the current U.S. practice for flu shots does account for age, delivering higher doses to patients 65 and older, Klein notes that "we never stop to question whether the need for that higher dose changes according to one's biological sex."

As part of the NIH grant, Klein will lead a new mechanistic study with mice looking at genetic and hormonal factors in age-related changes in immunity. Another study, to be steered by Hopkins medical professor Sean Xiao Leng, will analyze differences by sex in adverse reactions to flu shots, considering the factor of "frailty," which tends to be more significant for men at a younger age.

The third major study—led by Andrew Pekosz, professor of molecular microbiology and immunology at the Bloomberg School—will expand an existing effort to collect post-flu-shot samples from health care workers at Johns Hopkins, looking at the influence of biological sex on immunity.

The NIH award also includes funding for several more pilot studies at Johns Hopkins. Klein says junior faculty will soon get the chance to apply for $50,000 grants for any research topic investigating biological sex differences in immunology, which could include focuses such as cardiovascular and autoimmune diseases. In addition, Hopkins will offer specialized assistance to researchers by creating two new CORE research facilities, one devoted to influenza and immunology, the other to sex and gender analysis.

The grant will also allow the Hopkins community to think more broadly and develop new strategies for "how we can better integrate these ideas of sex and gender into our existing medical and grad school curricula," Klein says.

The NIH grant comes specifically from the National Institute on Aging and the Office on Research of Women's Health, establishing a specialized center cooperative agreement with Johns Hopkins for five years. Klein's team will work jointly with several Johns Hopkins resources, including the Center of Excellence for Influenza Research and Surveillance; the Older Americans Independence Center; and the Center for Women's Health, Sex, and Gender Differences.

A SADII website is expected to launch soon. For more information on the studies, contact Klein at Sklein2@jhu.edu.