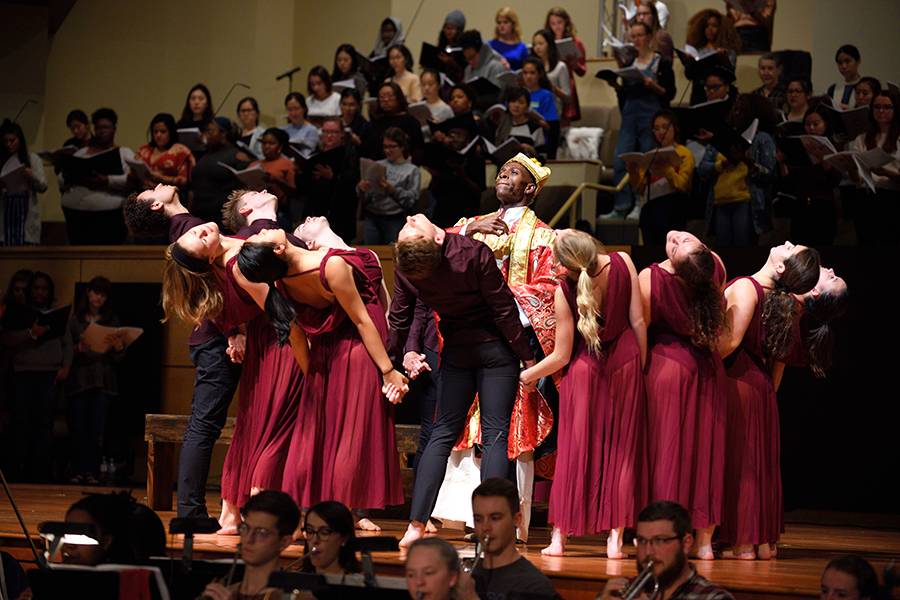 Twelve days before a mammoth, collaborative performance of Leonard Bernstein's Mass: A Theatre Piece for Singers, Players, and Dancers at Baltimore's New Psalmist Baptist Church, a large contingent of the performing vocalists gathers in the Peabody Institute's Friedberg Hall for rehearsal.

A mix of Peabody chorus singers and members of the Morgan State University Choir fills the orchestra seats, organized by vocal range from soprano to bass, right to left. The Peabody Children's Chorus sits in front of them. Onstage, vocalists playing the production's Street Singers fill three rows of chairs beside the singers playing the main character of the Celebrant and his two child acolytes. A student sits at the piano, stage right, and all around bustles a coordinated flank of ensemble directors and managers.

"It's a spectacle, and musicians could go their entire career and not have any exposure to it. And in terms of the world that we find ourselves in today, the piece is very timely. It is a huge undertaking and, I think, a perfect project for us right now."
Fred Bronstein
Dean, Peabody Institute

Standing at a podium center stage, Maestra Marin Alsop conducts the performance, cueing sections, marking time, and listening to what parts need those subtle tweaks that transform a work from page to stage.

All told, about 540 singers, musicians, and dancers are involved in this production of Mass, Bernstein's adaptation of the Catholic service that explores the crises of faith that come with living in a fractured modern world. The massive work of musical theater was composed for the 1971 opening of the John F. Kennedy Center for the Performing Arts in Washington D.C.

This performance of Mass—which begins at 7:30 p.m. on Friday, Oct. 26—includes seven Peabody ensembles as well as the Morgan State choir, the Baltimore City College High School Choir, the Baltimore School for the Arts Chamber Choir, the Johns Hopkins Concert Choir, and the New Psalmist Baptist Church Choir—all of which have been working on their parts separately this semester. This piano run-through is the first time a few of these groups have come together. And as they enter the 10th movement of the piece, known as the "I Don't Know" section of the work, Alsop pauses to chat with the singers.

She points out that this song is the first expression of the kinds of doubts that Mass wrestles with, and that anxiety needs to be felt.

Performances are the showpieces of the conservatory experience, but rehearsals are where the hard work takes place. All of the performers' technical elocution and virtuosity get harnessed and shaped in order to tell the human stories that composers put into their works. Mass provides a rare opportunity to bring a large group of Peabody and community ensembles together for an epic, collaborative experience.

Fred Bronstein, dean of the Peabody Institute, says that Peabody wanted to acknowledge Bernstein's centennial in some way and realized Mass was an ideal project.

"First of all, it's not a piece that you get to see or hear all that often," he says. "It's a spectacle, and musicians could go their entire career and not have any exposure to it. And in terms of the world that we find ourselves in today, the piece is very timely. It is a huge undertaking and, I think, a perfect project for us right now."

Alsop sees Mass as complementing "the philosophical lines of what Peabody is trying to achieve with the 21st-century musician citizen," she says. "It really fits into [Dean Bronstein's] vision for a connected universe for students. It makes you feel like you're part of a much bigger commitment and aspiration."

The scale of Mass practically pushes anybody willing to tackle it outside of concert hall conventions. The score calls for a full orchestra, a rock band, a marching band, and a few different choir groups. Musically, Bernstein combines contemporary symphonic music with elements of popular and sacred music, making for a complex and demanding work. In a recent essay for The New York Review of Books, New York University history Professor Larry Wolff notes that Bernstein wrote Mass during a time of heightened political turbulence, but also at a time when he started checking out rock concerts with his daughter. 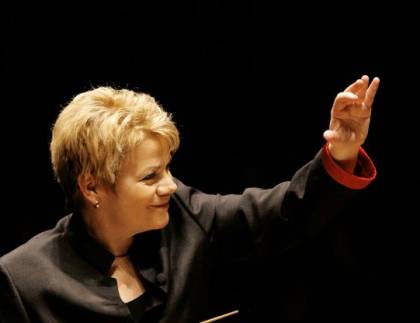 Bernstein "threw many different styles and genres together, creating a mosh pit of ideas, which represents the complexity of society at large," says Samuel Mungo, managing director of Peabody Opera Theatre, who is directing the production. "We all had a discussion about where this piece fits in a society that's fractured and there's so many things that you can't believe in. You can't trust fake news, you can't trust the police, you can't trust a church with sex scandals. There's no place to rest your soul."

That tension drives Mass, and Mungo adds that he's "approached it exactly as I would an opera, where all the Street Singers are creating honest characters, the congregation around the Celebrant."

Tenor Curtis Bannister, a 2010 graduate of Peabody's vocal graduate performance program and cast member of the NBC drama Chicago Fire, plays the Celebrant, the central character who experiences the tension as a crisis of faith.

Bannister notes that Alsop is a world-renowned interpreter of Bernstein, and working on Mass gives students invaluable insight into what it's like to be a working musician.

"Having students be able to access a figure like [Alsop], to see what a conductor at her professional level expects from her singers, the type of musicality that she looks for, that's important," he says. "They get to see how cooperative and communicative you have to be to make the piece better, the difference between how it works professionally and how it works in school."

"Bernstein's 'Mass' returns to Baltimore, as provocative as ever"

Four nights before the performance, all the musicians, dancers, and singers move into New Psalmist Baptist Church in Baltimore's Lochearn neighborhood for their first rehearsals with the entire ensemble. It's a tremendous sight to behold, a battalion of young artists filling a venue that can hold a few thousand people with sound. And when they get to the "I Don't Know" movement, the Street Singer's attitude is there. It's in his voice. It's in his posture. It's in his facial expressions. Mungo and Alsop and their colleagues are still working out stage movements and entrances and exits, but musically, they're finding their way to making Mass come alive.

Understanding the vulnerabilities expressed by the notes in a score is as much a human education as it is a musical one.

"I think it's very important that [music students] understand that they can be part of a much bigger project, a much bigger goal, a much bigger outcome, that there can be a larger purpose to what we're all doing," Alsop says. "I think this is a piece that can give us a sense of belonging to a community, the sense that art can really transform people, because I think it will inspire not only the people who are participating in it but also all the people that will hear it."

It's sentiment she suggested that first time they got together in Friedberg Hall. "Mass is a big story," Alsop told the singers at that first piano run-through. "I'm not going to tell you that story; I'll let you figure it out. So let's get into it."

Leonard Bernstein's Mass, A Theatre Piece for Singers, Players, and Dancers featuring seven Peabody ensembles and five community choirs will be performed at 7:30 p.m. on Friday, Oct. 26, at Baltimore's New Psalmist Baptist Church. To purchase tickets or for more information, contact Peabody's box office at boxoffice@peabody.jhu.edu or 667-208-6620, or visit peabody.jhu.edu/events