On the science of happiness and the benefits of positive psychology

If you're looking for proof that happiness helps you live longer, look to the nuns.

A longitudinal study published in 2001 examined the diaries of 180 Catholic nuns, finding that positive emotional content in their journal writing correlated to longevity. After analyzing the writing content—how each nun described her emotions, activities, or viewpoints—and coding positive, neutral, or negative descriptions, researchers discovered that nuns with the highest number of positive writings lived an average of six years longer than nuns with the lowest number of positive writings.

"[College] is a smorgasbord of joy, where you get to go and learn anything you want to learn. That's what we want—for you to reach out for more and more experiences."
Justin Halberda
Psychologist

American psychologist Martin Seligman conducted similar studies in different populations of people and found similar results. Pessimism, he concluded, is like smoking two and a half packs of cigarettes a day.

These studies are proof, said Johns Hopkins psychologist Justin Halberda, that positive psychology can help us become happier, healthier, and closer to our ideal selves.

Halberda spoke Tuesday as part of orientation for incoming first-year students at Johns Hopkins University. The talk was adapted from a course he teaches in positive psychology, the scientific study of the thought processes that allow people to thrive and live meaningful lives. Halberda's positive psychology course is regularly among the highest-rated classes Johns Hopkins offers, noted Andrew Wilson, dean of academic and student services, during introductory remarks.

During the talk, Halberda examined scientific studies of happiness. In one, scientists interviewed lottery winners and asked them to rate their current and predicted happiness one year after winning between $50,000 and $1 million. The study participants reported less daily happiness than a control group of individuals who hadn't won any money, Halberda said.

The researchers then conducted interviews with quadriplegics and paraplegics one year after the accidents that left them paralyzed. The scientists found that one year later, lottery winners reported the same daily and predicted happiness as those who were paralyzed.

Clearly, positivity is not only about what happens to someone in their lifetime. It's also about outlook.

Such a great talk by @johnshopkinsu professor, Justin Halberda on the science of happiness and wellbeing at @jhuorientation. Love this quote!

The two best ways to cultivate a positive outlook, Halberda said, are to:

"In some cases," Halberda said, "sleep and exercise has been shown to be as effective as an anti-depressant."

Nearly all mood and anxiety disorders co-occur with one or more sleep abnormality, he added.

Another important path to positive psychology is living a meaningful life. He encouraged students to get involved in student activities and to take classes outside their comfort zones. He advised them to find professors known for their passion and love of the subject, and to study under them.

"[College] is a smorgasbord of joy, where you get to go and learn anything you want to learn," he said. "That's what we want—for you to reach out for more and more experiences." 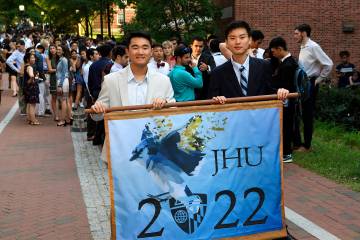 Halberda ended his talk with a quote from philosopher and educator Howard Thurman, who mentored Martin Luther King Jr. and other civil rights leaders.