Her 'Rehearsal for Reconstruction,' published in 1964, is considered a groundbreaking work in the scholarly reconsideration of North American slavery

Willie Lee Rose, professor emerita of history at Johns Hopkins University and a noted scholar of slavery and the Reconstruction period, died in her sleep on Wednesday at her residence at Roland Park Place in Baltimore. She was 91. 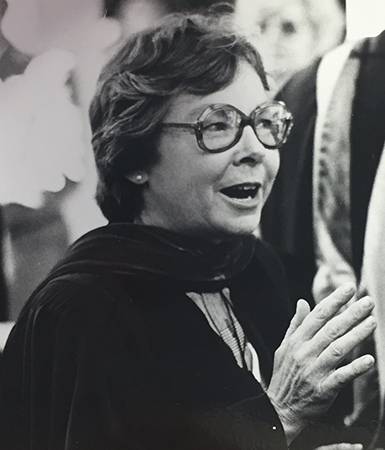 Rose is perhaps best known as the author of Rehearsal for Reconstruction, a book that won several major prizes and that is considered a groundbreaking tome in the scholarly reconsideration of North American slavery. In a review of the book, The New York Times said Rose "has given us what is assuredly a definitive work."

"Willie Lee Rose is among a cadre of historians rightly credited with setting the stage for transformative rethinking of the history of slavery and the Reconstruction era," said Martha S. Jones, professor in the Department of History. "Her 1964 book, republished in 1994, broke important new ground by making the case for how black Americans helped lead the nation into a post-emancipation world. The influence of that book—which explained that even before the Civil War's end, former slaves were at work redefining the nation—can still be felt today in the work of historians, including myself, who argue that story of emancipation and reconstruction extend back to the early 19th century. It's worth noting that Rose became a historian in a period during which women in the profession were rare."

In addition to her many publications, Rose wrote occasional reviews of historical books for The New York Review of Books.

A native of Bedford, Virginia, Rose graduated from Mary Washington College and went on to teach high school in Elkridge, Maryland, from 1947 to 1949, when she married William G. Rose. She continued to teach until 1955, when she began to pursue graduate studies at Johns Hopkins University.

After receiving a doctoral degree from Hopkins, Rose taught at the University of Virginia, where she was named Commonwealth Professor of American History. She also served as the Cardozo Visiting Professor at Yale.

"Willie Lee Rose is among a cadre of historians rightly credited with setting the stage for transformative rethinking of the history of slavery and the Reconstruction era."
Martha S. Jones
Johns Hopkins history professor

In 1970, Rose was appointed chair of the American Historical Association's Committee on the Status of Women in the Historical Profession. The committee released a report—soon dubbed "The Rose Report"—that documented widespread discrimination against women within academic departments and within the AHA. In the report's introduction Rose wrote, "The present demand for social justice for women coincides with the permanent interest of the historical profession. To increase the opportunities open to women in the field of history is to advance the quality of the profession itself."

In 1991, the AHA presented Rose with The Troyer Steele Anderson Prize, given every 10 years to a historian who has made "an outstanding contribution to the advancement of the purposes of the Association."

Rose was hired as a full professor at Johns Hopkins in 1973. In 1977, she was the first woman to be selected as the Harold Vyvyan Harmsworth Visiting Professor of American History at Oxford University. Established in 1922, the selective and prestigious professorship enables a distinguished American historian to spend a year in Oxford teaching, researching, and leading seminars.

"Rose was a pioneer in the history of women, with a special interest in the innumerable roles that each woman played, often too silently," said Orest Ranum, professor emeritus, who worked with Rose at Hopkins. "She gave them voices."

Shortly after returning to Baltimore from Oxford, Rose suffered a debilitating stroke that greatly limited her academic work. Several years later, in 1985, her husband, William G. Rose, died. He was also a graduate of Johns Hopkins and a World War II veteran.

In 1982, a book of Rose's essays was edited by William W. Freehling, a fellow colleague in the Department of History and published by Oxford University Press. In a review, The New York Times called the book—Slavery and Freedom—a "splendid achievement," saying "Rose manages to keep conflicting ideas, each containing a part of the truth, in tension and, in the process, to keep her balance and fairness to a remarkable degree."

Rose is survived by a niece, Vicki Sheretz of Roanoke, Virginia; a nephew, John Nichols of Bedford, Virginia; and several cousins.