J. Alex Haller Jr., a pioneer in pediatric surgery, pediatric trauma treatment, and biomedical ethics who transformed the practice of pediatric care at Johns Hopkins and throughout the nation, died on Wednesday in Glencoe, Maryland. He was 91.

A professor emeritus of pediatrics, surgery, and emergency medicine in the Johns Hopkins University School of Medicine, Haller was surgeon-in-charge of Johns Hopkins Children's Center for nearly 30 years and also established pediatric trauma as a stand-alone subspecialty in the United States. His work was instrumental in advancing pediatric care and leading the field to recognize that pediatric patients required special anesthesia, operative care, and postoperative care.

"Dr. Haller was a pioneer in pediatric surgery and responsible for training innumerable surgeons and leaders in the field," says George Dover, former director of the Department of Pediatrics at the Johns Hopkins University School of Medicine and former pediatrician-in-chief of Johns Hopkins Children's Center. "He was responsible for the concept of the Children's Medical and Surgical Center, which was the first building to house all children in a separate facility at Johns Hopkins. His impact on pediatric medicine was enormous."

Along with the late David Sabiston Jr., a pioneering heart surgeon at Johns Hopkins, Haller was the founding co-director of the Division of Pediatric Surgery in 1963. With his boundless enthusiasm, he convinced other Johns Hopkins departments—such as orthopaedics, neurosurgery, and urology—to establish pediatric subspecialty divisions, making Johns Hopkins the first academic medical center to implement pediatric surgery specialists.

After Haller's pediatric surgery division joined the EMS in 1979, all Maryland children under the age of 14 who had severe traumatic injuries were flown directly to Johns Hopkins' first-of-its-kind Children's Shock Trauma Center.

Haller's impact on pediatric emergency care included his pivotal role in the design and development of the Pediatric Advanced Life Support, or PALS, protocol, which details steps and procedures for the stabilization of critically injured children or those with other emergency conditions.

He also developed what became known as the Haller Index for measuring the physical impact of the common chest wall deformity pectus excavatum, a sunken sternum that can cause heart complications.

"When I first arrived to Johns Hopkins as pediatric surgeon-in-chief, Dr. Haller reached out to me, and served as a trusted mentor and sage advisor, and I knew that in Dr. Haller I had a half century of unbiased wisdom and unmatched experience," says David J. Hackam, professor of pediatric surgery at Johns Hopkins University and pediatric surgeon-in-chief and co-director of Johns Hopkins Children's Center. "I greatly miss his kindness, his warmth, his incredible generosity of spirit, and his guidance, and I hope every day to be able to live up to his legacy on behalf of the children in our region and beyond."

Born in Pulaski, Virginia, on May 20, 1927, Haller earned his bachelor's degree from Vanderbilt University and his MD from the Johns Hopkins University School of Medicine. After graduating from Johns Hopkins in 1951, Haller spent a year as a fellow in pathology at the University of Zurich, followed by two years of military service. 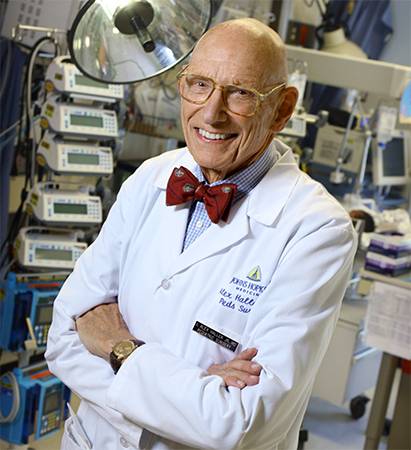 Haller returned to Johns Hopkins in 1955 to complete his residency, then joined the faculty of the University of Louisville in 1959, where he served as chief of cardiac surgery at the Louisville General Hospital. He spent four years there before Johns Hopkins' legendary surgery chief Alfred Blalock asked him to return to Johns Hopkins to head the new pediatric surgery division he planned to launch.

During his nearly three decades of leadership of pediatric surgery, Haller significantly advanced the specialty. A prodigious surgeon, he performed a number of high-profile operations—including the successful 1982 separation of conjoined twins, connected at their chests.

Haller published more than 350 scholarly papers, more than 60 book chapters, and wrote several books, including The Hospitalized Child and His Family in 1967. He received many awards, including the American Academy of Pediatrics' highest surgery award, the William Edwards Ladd Medal; the Denis Browne Gold Medal, the British Association of Pediatric Surgeons' highest honor; and the Vaclav Kafka Medal, the top award from the Society of Pediatric Surgery of Bohemia (the Czech Republic).

Services will be held on Saturday at 11 a.m. at the Cathedral of the Incarnation, 4 E. University Parkway in Baltimore. In lieu of flowers, the family requests those wishing to honor Dr. Haller do so by contributing to the Haller Leadership Fund at Johns Hopkins Children's Center, C/O Johns Hopkins Children's Center, Attn: Alicia Spitznagel, Development Office, 750 E. Pratt Street, Ste. 1700, Baltimore, MD 21202.