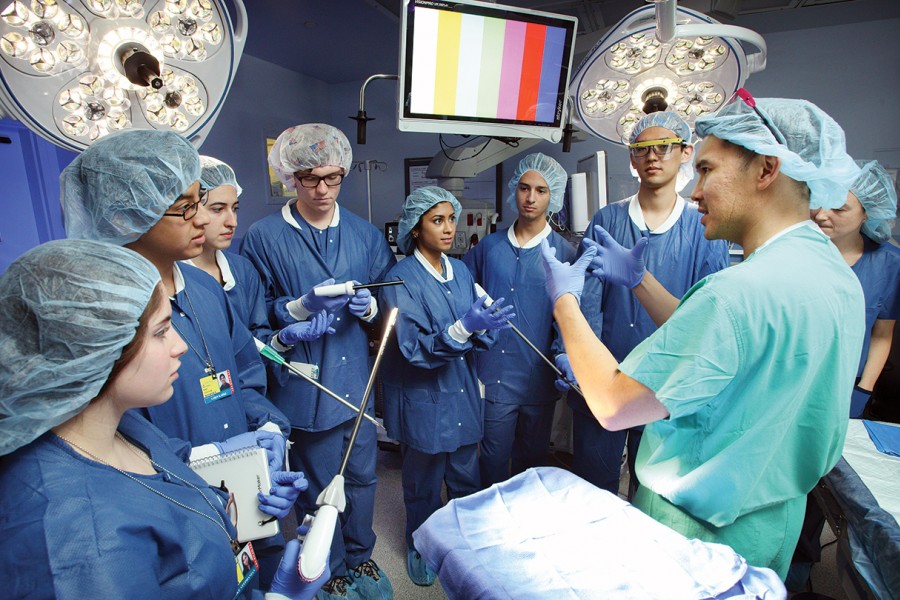 When Edward Ahn and Rajiv Iyer, neurosurgeons at the Johns Hopkins Hospital, have a problem they'd like to solve—like dozens of clinicians before them—they place their faith in the undergraduate students in the Johns Hopkins Department of Biomedical Engineering's Design Team courses.

Ahn, Iyer, and their colleagues have been experimenting with a new surgical technique for craniosynostosis—a rare condition in which the thin plates of an infant's skull fuse prematurely, resulting in head malformations and potential problems with brain development. To fix the condition, surgeons open the prematurely closed cranial sutures, giving the brain a chance to grow normally.

The doctors want to make this surgery safer, faster, and less invasive. Their new procedure involves a single small incision into the infant's skull, instead of the usual two incisions. To accomplish that, they have borrowed a tool from dentistry: With technology known as piezoelectricity, they employ ultrasonic waves to cut a small, precise path through the skull with minimal damage to surrounding soft tissues.

This brings us to the team's engineering problem: Dentists' piezoelectric tools are L-shaped. When used on infants' heads, they carry a risk of digging into the dura mater, the membrane that surrounds and protects the brain. The clinicians want a tool that is optimized for cutting along the top of a skull, not the side of a jaw.

Johns Hopkins leads the nation in biomedical engineering education in part because of this focus on innovation, collaboration with clinicians and industry, and an emphasis on hands-on, project-based learning.

At the beginning of 2017, Ahn and Iyer submitted their challenge to the Department of Biomedical Engineering Design Team instructors, who oversee more than a dozen teams of undergraduate students each year working on biomedical engineering innovations. These teams of approximately eight biomedical engineering majors are tasked with solving health care design, engineering, and workflow problems identified by Johns Hopkins clinicians. Undergraduates also work closely with advanced design students in the Department of Biomedical Engineering's Center for Bioengineering Innovation and Design yearlong master's program.

Johns Hopkins' Department of Biomedical Engineering leads the nation in undergraduate and graduate biomedical engineering education in part because of this focus on innovation, collaboration with clinicians and industry, and an emphasis on hands-on, project-based learning. "Our students are practicing engineers working in the hospital and labs as early as freshman year," says Michael I. Miller, director of the Department of Biomedical Engineering. "I think our undergraduate and graduate students are privileged to be at a place like Johns Hopkins, where they can work alongside scholars who have discovered the basic principles of neuroengineering, computational medicine, and all the other subdisciplines of biomedical engineering."

By April 2017, Ahn and Iyer had been paired with a group of these young innovators—a team led by fourth-year Design Team leader Saki Fujita, a biomedical engineering student who grew up in Japan. Fujita and seven other students on her team are deep into the process of prototyping a device for the clinicians. "By the end of the semester," she says, "we should have something ready for the surgeons to test." 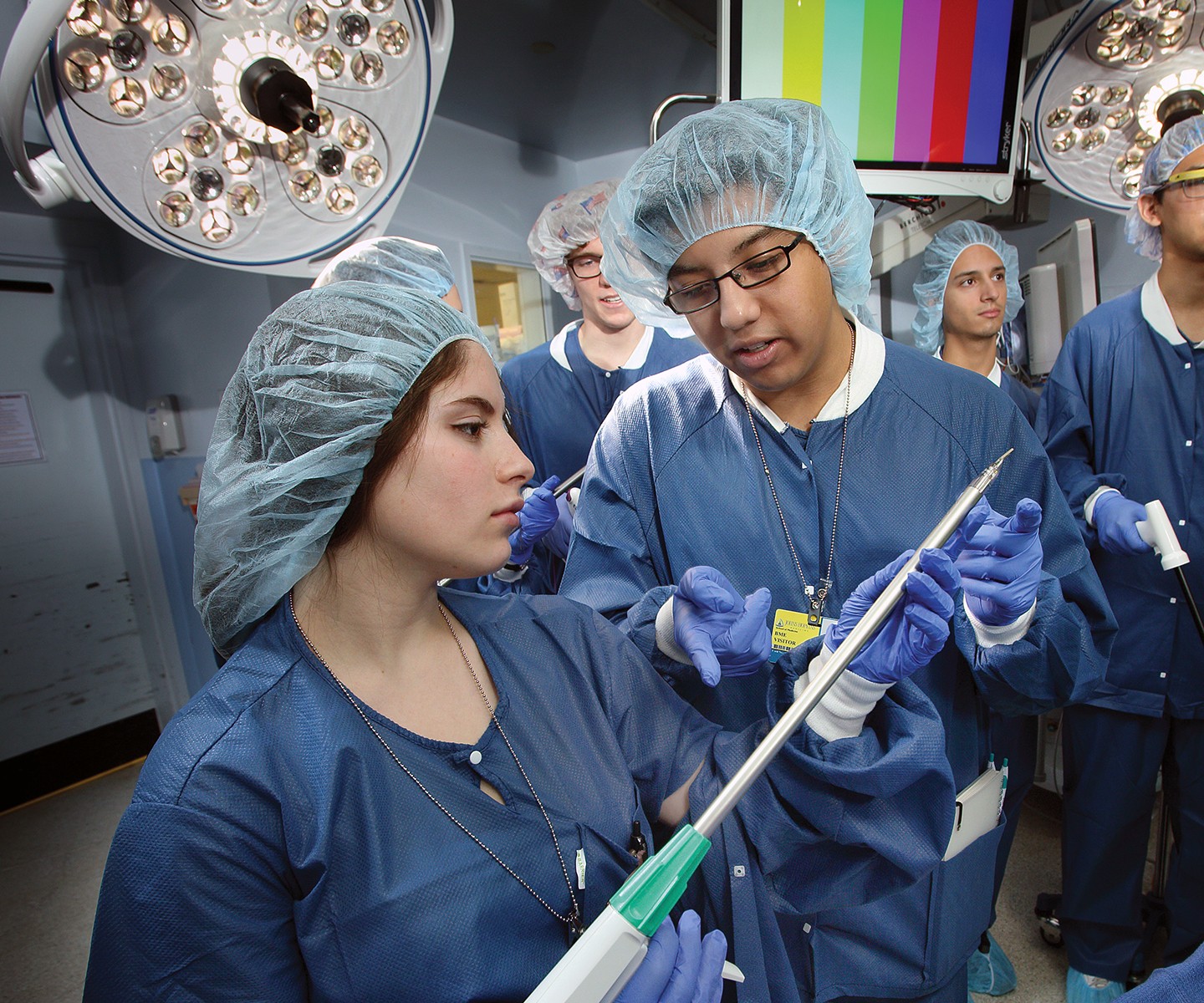 Ahn, Iyer, and Fujita's project is one of hundreds of clinician/student collaborations that have been forged through the Design Team courses since their inception in 1998. Undergraduate Design Team efforts have resulted in more than a dozen provisional patent applications, licensing agreements, and hundreds of thousands of dollars in external funding. Their products are in research, clinical, and commercial use. What's more, projects turn up as regular winners in VentureWell's BMEidea and Debut Challenges, the Lemelson-MIT Student Prize competition, the Collegiate Inventors Competition, and other competitions nationwide.

But the program is about much more than patents, grants, and competitions. All Design Team experiences—not just the small number of projects that reach commercial fruition—are powerful learning experiences, says Nicholas Durr, assistant professor of biomedical engineering and the director of the undergraduate Design Team courses. Students gain a real-world sense of how to work through cycles of design and prototyping, how to communicate effectively with clinicians, how to develop business plans and assert intellectual property, and how to collaborate in groups with diverse skills and interests. 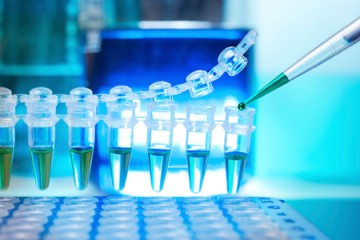 "Every project is completely different," Durr says. "What's useful for one team is not what's going to be useful for the next."

Durr's colleague Elizabeth Logsdon, the Department of Biomedical Engineering's director of undergraduate advising and a lecturer who co-teaches the Design Team courses, notes that the courses have few lectures and relatively little didactic content. Instead, the student teams mostly work independently in more than 5,000 square feet of design space in the BME Design Studio, which has a 24-hour video connection to a companion space—the Carnegie Center for Surgical Innovation—in the Johns Hopkins Hospital's Carnegie Building. If a team hits an obstacle and needs help with coding, stress-testing, machine fabrication, or business plan writing, Logsdon and Durr will connect them with a faculty member or clinical mentor who can teach them the relevant skills.

But whatever strategies they might use to tackle their clinical problem, each Design Team faces no-nonsense deadlines. Every two weeks, each team undergoes a desk review, in which the course's faculty members grill them on their progress. And roughly once a month, each team presents its work to its primary clinical sponsor and other clinician mentors. By the end of the spring semester, they're expected to submit polished business plans and professional-grade reports on their prototyping and testing.

On a cold afternoon in February, Fujita's group is convening in full for the first time after the winter break. While they were away, a long-awaited package arrived: a box of realistic foam skulls designed for surgical training. Now they finally have something to test their piezoelectric instruments on. As they open the box, one of Fujita's teammates searches online to confirm that these models are, as advertised, similar to the density of actual infant bones.

Before they start drilling, Fujita gives a beginning-of-the-semester pep talk. Her team—like all other Design Teams—has expanded from five students to eight, as three first-year students have joined.

"There are more of us now," Fujita says, "and we should probably start to work in subgroups. It's important for each person to take initiative in their role." 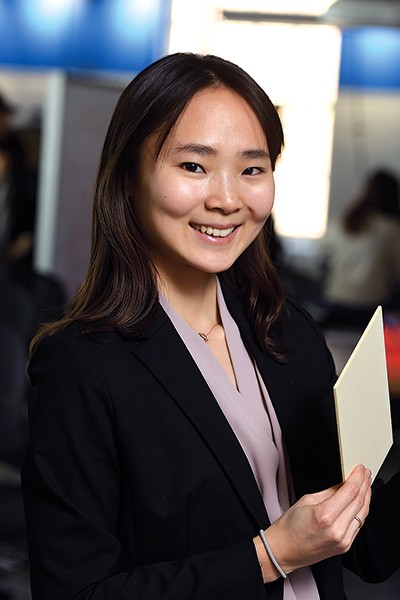 Image caption: "The great thing about [Design Team] is that they give us time to start slowly and to learn about the clinical problem," says Saki Fujita, a Design Team leader in the Department of Biomedical Engineering.

"I know I want to focus on making the instruments," says fourth-year Olivia Musmanno. She intends to do a series of rapid silicone prototypes using the BME Design Studio's 3-D printers. Once they've achieved their design specifications, the team will have metal prototypes cast in the fabrication center. All the while, the students need to be mindful of the team's annual budget, although many groups secure additional money for their projects via grants, corporate sponsorships, or business plan competitions, which often bring in tens of thousands of dollars.

Musmanno intends to go to medical school after a gap year or two. "I plan to be a surgeon," she says. "Hopefully a reconstructive surgeon, but definitely a surgeon. But I'd still like to be a designer of medical devices."

Across the Design Studio this afternoon, other Design Teams are having similar conversations. One team is working on new methods to keep peritoneal-dialysis catheters safe from infection. Another is building a device to measure blood flow within the spinal cord of patients with severe injuries. All told, there are 13 teams in this year's undergraduate cohort but as many as 40 ongoing projects, including efforts from previous years.

As the teams huddle over their projects, they're visited by Michelle Zwernemann, who serves as staff engineer for the Design Team courses. She joined the faculty in the fall of 2017 after several years of work at a prosthetics firm, and she tends to ask blunt questions. "I want to help these students avoid the pain points that new engineers often face when they start out in industry," she says.

Also making rounds this afternoon is Amir Manbachi, a lecturer who serves as the Design Team courses' third major faculty member, along with Durr and Logsdon. Manbachi co-invented and patented a spinal surgery device while he was a graduate student at the University of Toronto a decade ago. "As engineers, we may not treat patients ourselves, but we have the opportunity to build devices or solutions that can save thousands of lives," he says.

One of the central challenges of the Design Team process, Durr says, is establishing the right kind of rapport between the clinicians and the engineering students. "We encourage teams to treat their clinical adviser as part of the team rather than a source of clinical knowledge," Durr says.

Clinicians occasionally submit project proposals that are too complex or ambitious for undergraduate design teams, Durr adds. In those cases, the clinicians are encouraged to collaborate with students in the master's degree program at the Center for Bioengineering Innovation and Design.

Students who assume team leader roles, as Fujita did at the beginning of 2017, take an additional course centered on project management, clinical exposure, and interpersonal dynamics.

Fujita, who plans to take a gap year before starting medical school, says that Design Team has been one of the strongest experiences she's had during her undergraduate years. "The great thing about it is that they give us time to start slowly and to learn about the clinical problem," she says. "We spent the fall semester reading papers, interviewing clinicians, and observing Dr. Ahn and Dr. Iyer in the operating room."

Ahn says that inviting novice engineers into the operating room has helped his team of surgeons rethink their clinical challenges. "We're used to doing things a certain way," he says, "but these engineering students can help suggest methods we may never have thought of."

That kind of deep clinical immersion—hours to collaborate with clinicians in their working environments—is one of the strengths of Design Team coursework, Durr says. "We want to teach our students to carefully observe processes and procedures in health care before they ever start building anything," he says. "The whole point of Design Team is to encourage that productive understanding between clinicians and engineers."

With any luck, infants with craniosynostosis five years from now will reap the benefit of that understanding.

This article originally appeared in the Summer 2018 edition of JHU Engineering magazine. 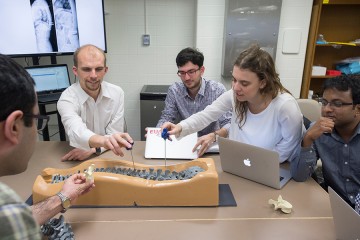 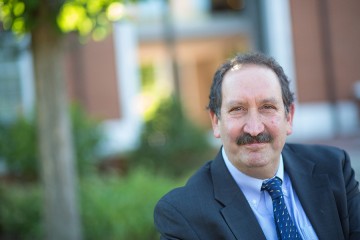 Engineering the future of medicine