Jonathan Grassbaugh, who graduated from JHU in 2003, was killed by a roadside bomb in Iraq in 2007 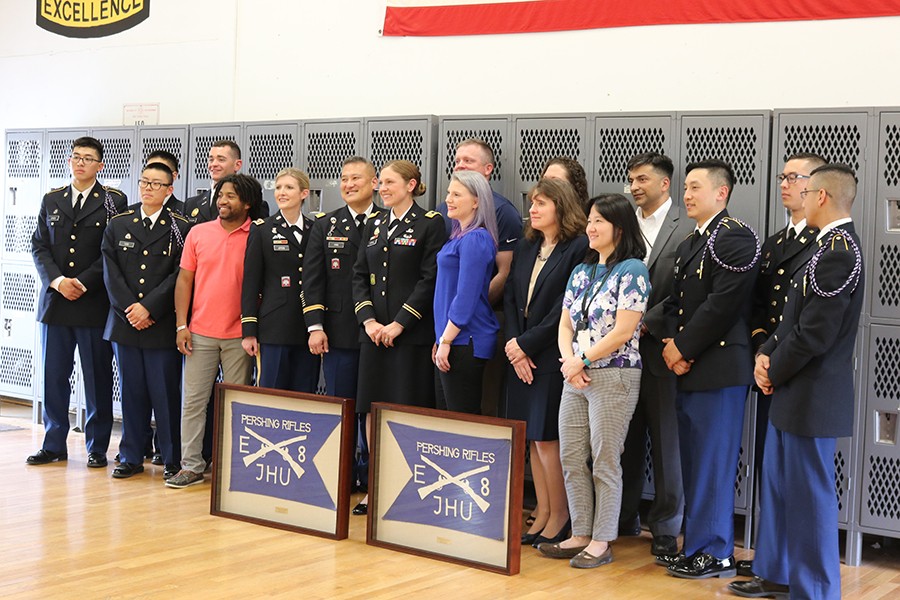 Image caption: The dedication ceremony brought together current and former ROTC members, including Jenna Ferrell (center), who was married to Jonathan Grassbaugh when he was killed in Iraq

"I'm reminded today of the inherent risks we take in this profession," said Joseph D'Antuono, a cadet standing tall in his dress blues. He addressed a small crowd that had gathered inside the ROTC drill hall on the Johns Hopkins University campus. 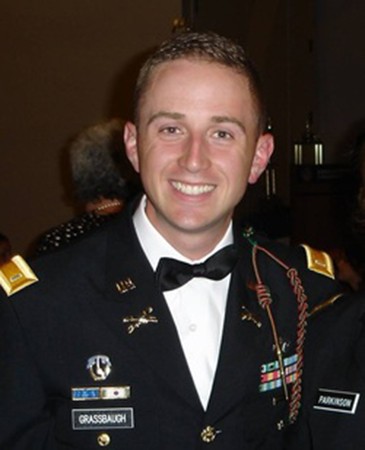 "I didn't have the honor to meet Captain Grassbaugh," he continued, "but I visited his grave. It was an emotional experience, and that to me is the definition of immortality: that people you've never met have an emotional response to hearing your story. That's what makes what we're doing here today so worthwhile."

Friday's ceremony marked the renaming of the Johns Hopkins ROTC battalion drill hall in honor of Jonathan Grassbaugh, a Hopkins alum and ROTC graduate. Grassbaugh was among four soldiers killed by an improvised explosive device while on duty in Zaganiyah, Iraq, on April 7, 2007.

He had enrolled in the Johns Hopkins ROTC program as a freshman in 1999 and went on to become a cadet battalion commander his senior year. He was a commanding officer of the military fraternity, the Pershing Rifles, and captained the battalion's Ranger Challenge Team. He graduated from JHU with a bachelor's degree in computer science in 2003 before being commissioned in the U.S. Army.

He was remembered by those who attended the dedication ceremony as a kind leader, a committed service member, and a devoted husband to his wife, Jenna Ferrell, who is also a Hopkins alum and now an Army major.

Yair Amir, chair of the Department of Computer Science in the Whiting School of Engineering and Grassbaugh's academic adviser, spoke at the ceremony. "He had leadership and drive, and a strong sense of service, and he imparted those values to our student community," Amir said. "I too was a captain in the Israeli Army, and I would've been honored to have had him as my commanding officer." 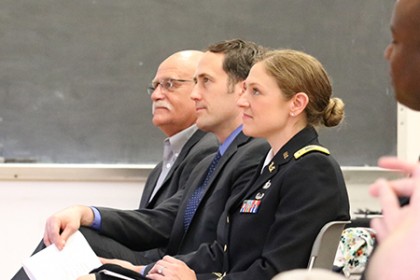 Image caption: Jonathan Grassbaugh is survived by (from left) his father, Mark; his brother, Jason; and his wife, Jenna.

"The drill hall is where we spend 90 percent of our time, and they said they wanted another way to recognize Captain Grassbaugh's sacrifice," he said. After the two cadets were commissioned, they left the renaming project in the hands of the next class of leaders, who took it on proudly. "This is really a special day for the battalion," Gorreck said.

In addition to renaming the building, the battalion unveiled two memorial plaques honoring distinguished ROTC members. The first recognizes recipients of the Captain Jonathan D. Grassbaugh Memorial Scholarship, which has been awarded annually by the Grassbaugh family since 2008 to ROTC cadets who demonstrate academic excellence, athletic prowess, and commitment to service. The second recognizes recipients of the Ranger Challenge Award, established last year by Grassbaugh's father, Mark, who was also an Army Ranger.

The ROTC battalion presented decommissioned flags of the Pershing Rifles to Grassbaugh's father and brother, Jason; as well as to Ferrell, his widow. 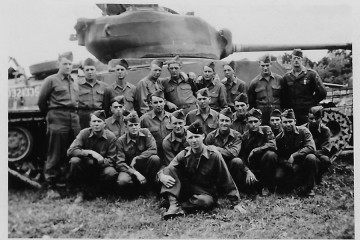 Published May 5, 2017
Vernon Foster fought in Battle of the Bulge and Colmar, served under Gen. Patton 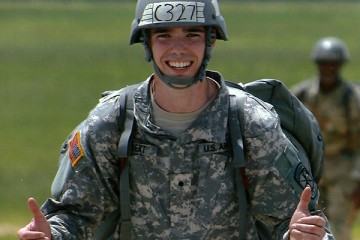