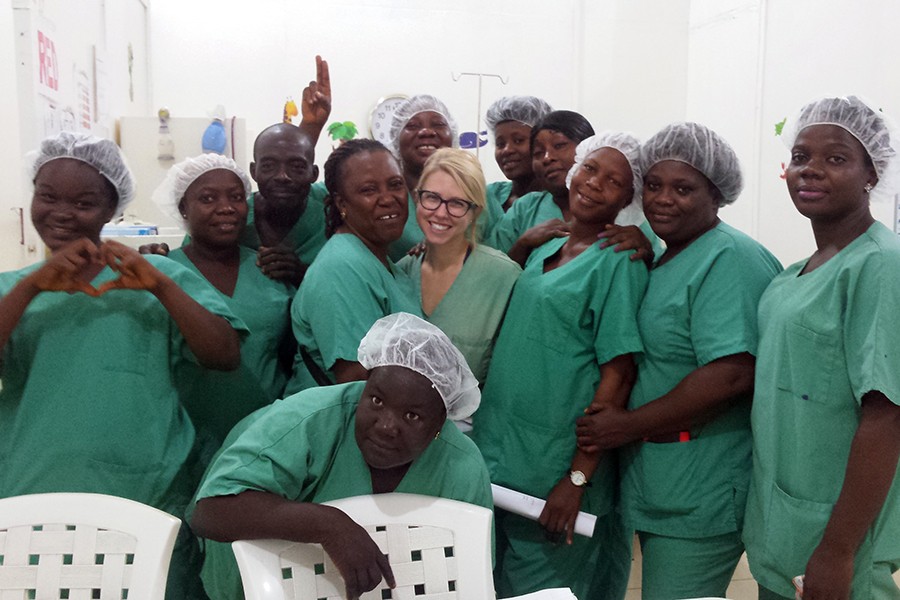 Image caption: Kayla Percy (center) and the national staff of the ER where she worked during her Doctors Without Borders mission to Liberia

For Kayla Percy, there wasn't much time to get her bearings at the camp in South Sudan before she was called to action. On her second day as a nursing supervisor for a small, 35-bed hospital in rebel territory, the International Committee of the Red Cross brought for treatment that same number of injured rebel soldiers—several with gunshot wounds.

"We were flooded with patients," says Percy. "We already had a full in-patient department, so we had to set up tents to get these patients in and start triaging and figuring out who needed to go to surgery. I was thrown in really quickly."

"It's a really important niche of health care. It's not for everyone... but we need dedicated, skilled workers who are willing to go where people need health care the most."
Kayla Percy
On her work with Doctors Without Border

That's when her experience as an ER nurse kicked in.

"I've had plenty of trauma patients with gunshot wounds, unfortunately," she says. "But I hadn't ever done anything that compared to being in a war zone. It was a huge learning curve."

On Monday, Percy, who is earning her Master of Science in Nursing and Master of Public Health degrees at Johns Hopkins, will speak about the missions she took for the international humanitarian group Doctors Without Borders. Her talk, at 6 p.m. in Charles Commons, is part of the student-organized Conversations in Medicine speaker series.

Since 2012, Conversations in Medicine has brought speakers and panel events to Johns Hopkins University six times a year. A joint effort between the health pre-professional honor society Alpha Epsilon Delta and the Women's Pre-Health Leadership Society, the series has spent two years exploring the theme of unconventional medicine. The group is sponsored by the Hopkins Parents Fund.

"At a place like Hopkins, which is renowned for its medical excellence, I think it's important to give students the whole picture of what medicine really is and to expand students' perspectives of the possible careers that are out there," says Ami Mange, a senior neuroscience major and chair of the Conversations in Medicine committee representing Alpha Epsilon Delta. "Medicine is a fast field—it's important to slow down and take time to see the options that exist. It's also a great networking opportunity." 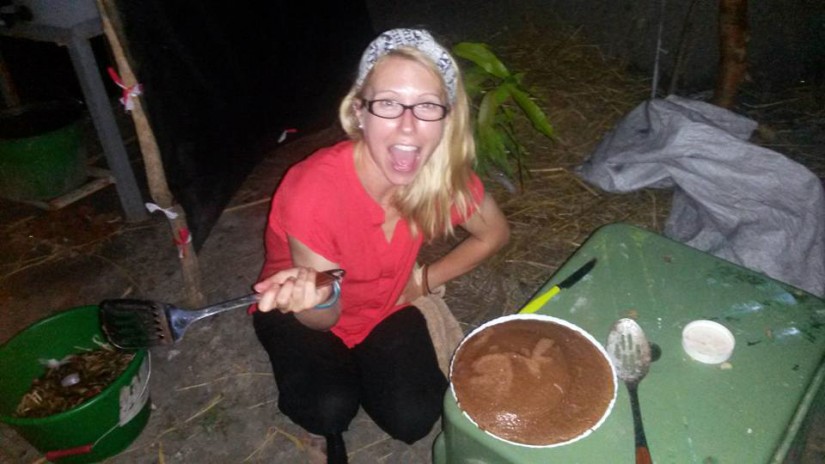 Image caption: Percy tries to bake a cake without an oven. "The conditions can be really difficult ... but we need dedicated, skilled workers who are willing to go where people need health care the most," she says.

Percy says she's scheduled plenty of time for questions from the audience during her talk. She says that people are often curious about the work that the organization does.

"[Doctors Without Borders] focuses on emergency medicine, but many of their assignments go on longer than just the initial days of a disaster," she says. "It's a really important niche of health care. It's not for everyone, and the conditions can be really difficult—mud huts and latrines and you're sweating all day because you don't have a fan—but we need dedicated, skilled workers who are willing to go where people need health care the most."

Her mission to South Sudan in 2015 had initially been planned for three months, but she decided to stay for six. While there, she became a jack-of-all-trades, conducting rounds in the ER with a physician, training South Sudanese staff members at the hospital, and serving as the hospital's pharmacist.

"Nurses end up filling in a lot of extra roles sometimes," she says, laughing. "At the three-month mark, I was just figuring out the roles and feeling comfortable, so I wanted to stay on, and I think that was a really good decision."

After returning to the U.S. for the holidays, she accepted another six-month assignment in early 2016 that took her to Liberia, where she supervised a hospital ER and worked in its intensive care unit. After her upcoming graduation in August, she plans to accept another mission before starting work as a nurse practitioner, and she says her future will likely continue to include work in international health.

Kayla Percy speaks as part of the Conversations in Medicine series on Monday, April 16 in Salon C of Charles Commons. Doors open for dinner at 5:30 p.m., and the talk begins at 6.

Disaster missions in their own words 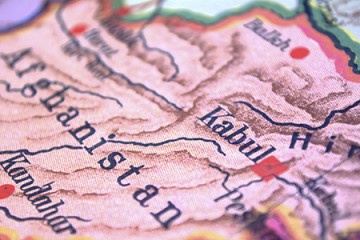 Published Oct 13, 2015
Surgeon Adam Kushner on Afghan hospital bombing and the dangers of working in a war zone