Four important points made by former U.N. Ambassador Samantha Power, and one raised by student protesters 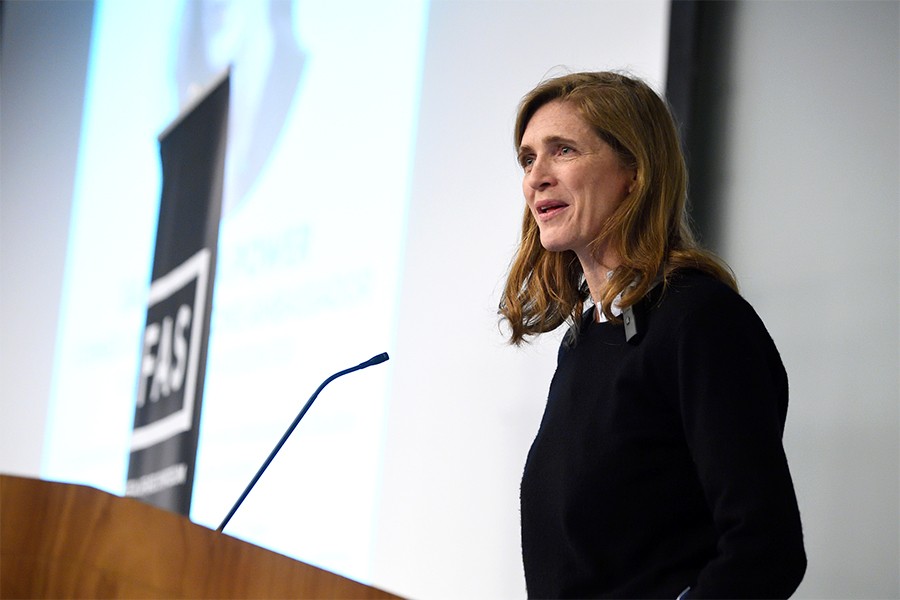 Samantha Power, a former U.S. ambassador to the United Nations and an expert in human rights policy, believes there many ways Americans can find hope in the midst of today's contentious political climate, reasons she articulated during a talk at Johns Hopkins University on Tuesday night as part of the Foreign Affairs Symposium.

Even as a group of students silently stormed the stage and held signs condemning her involvement in the U.S. decision to support an oft-criticized Saudi-led coalition in Yemen, Power spoke of history, of openness, and of citizenship. She thanked the students for their demonstration and for caring about the conflict in Yemen.

"If there's anything our country has shown, it's not that we're a perfect country, but that the quest to be a better country is ongoing."
Samantha Power
Former U.S. ambassador to the U.N.

"Roughly seven out of 10 Americans think the country is off-track, and most believe the state of our politics has reached a dangerous low point that is unrivaled in history—that we haven't gone through dark days like this before," she said. "… But if there's anything our country has shown, it's not that we're a perfect country, but that the quest to be a better country is ongoing."

Below are some of the main messages of Power's talk, plus more on the discussion inspired by student demonstrators.

1. Everyone needs some perspective now and then; examining history is a great way to get it

Power book-ended her talk Tuesday with a story about the internment of Japanese-Americans during World War II and the efforts of a "rag-tag coalition" dedicated to keeping academically successful Japanese-American students out of concentration camps and placing them in colleges around the country. In the political climate during the second world war, Power said, resistance to racism was scarce and the team was frequently denied enrollment requests.

Samantha Power: How Mike Pompeo could save the State Department

Still, the coalition, which never had more than 12 staff members at a time, did achieve modest victories, and 4,000 students were spared life in internment camps and went on to receive higher education, in some cases becoming leaders in their fields. Americans should draw hope from the fact that efforts supporting justice, however imperfect, can change a person's life, Power said.

2. Healing divisions within our society should be our number one priority

"We are very proud of having a robust political discourse in this society and having an open debate, but repressive powers are seeking to exploit that openness," Power said.

She pointed to evidence of foreign adversaries like Russia sowing discord on social media for political gain.

"It was about widening the fault lines in American society," she said. "From Putin's perspective, it's about having people in social discord."

For the country's national security, she said, Americans should set aside differences and prejudices to overcome social discord and strengthen the U.S. from the inside.

3. While politicians will come and go, we all have a duty to uphold our democratic institutions

She shared a saying originally posited by the Supreme Court Justice Louis Brandeis and famously included in President Obama's farewell address: "The most important office in democracy is not that of president, it's that of citizen."

Citizens hold democratic institutions accountable. Executive overreach is not new, Power said, but when the U.S. stumbles on domestic and social issues, it creates a corrosive effect on foreign policy and prevents the U.S. foreign service from successfully intervening in human rights abuses overseas. Domestic policy and foreign policy are inextricably linked in that way, she explained, so civilian efforts in the U.S. ripple outward to affect the rest of the world.

4. Americans have agency to effect change, even if it doesn't feel like it

For most political issues, change will be incremental, Power said. The key is to not become disheartened by slow progress.

"The temptation, when the problems are large, is to mobilize large solutions," she said. "But when large solutions don't come, a feeling of hopelessness sets in. … There's always something we can do." 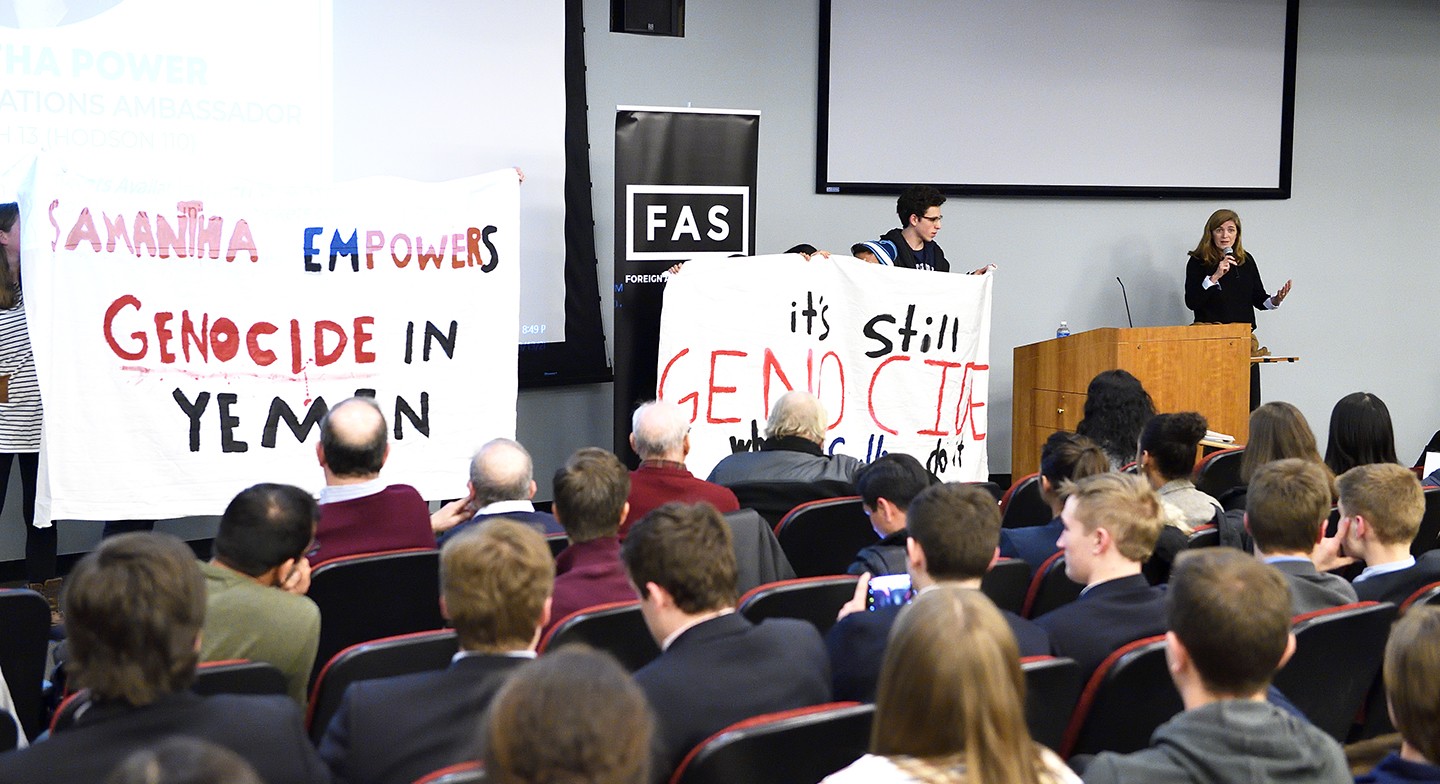 About 30 minutes into her talk, Power was interrupted by a group of eight students who approached the stage and silently displayed two large sheets painted to read "Samantha emPowers genocide in Yemen" and "It's still genocide when U.S. allies do it." The students did not speak at the event or respond to Power's offer to address their questions during the discussion portion of the evening, nor did they stay during the Q&A session.

The Yemeni conflict, Power later explained, is a complex example of how foreign policy shifts as time passes and relationships to foreign powers change. The U.S. has supported a coalition of forces led by Saudi Arabia and Yemen's former government in their efforts to combat terrorist-aligned Houthi rebels. By recent U.N. estimates, more than 5,200 Yemeni civilians have been killed during the conflict, and Saudi Arabia's intervention, which has included bombing civilian targets such as hospitals, has been condemned on the world stage.

Power reiterated her point that demanding accountability for government actions is an essential act of citizenship. She commended the student protesters and thanked them for supporting the Yemeni people.

"The fact that young people are protesting about Yemen is incredibly important," she said. "One of the reasons this vicious campaign [against Yemeni civilians] continues to happen is because the Saudis are paying almost no price in the court of public opinion. We should support [these students'] initiative."

The event was co-sponsored by the Aronson Center for International Studies. 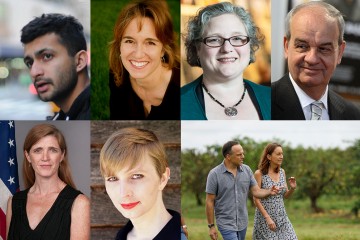