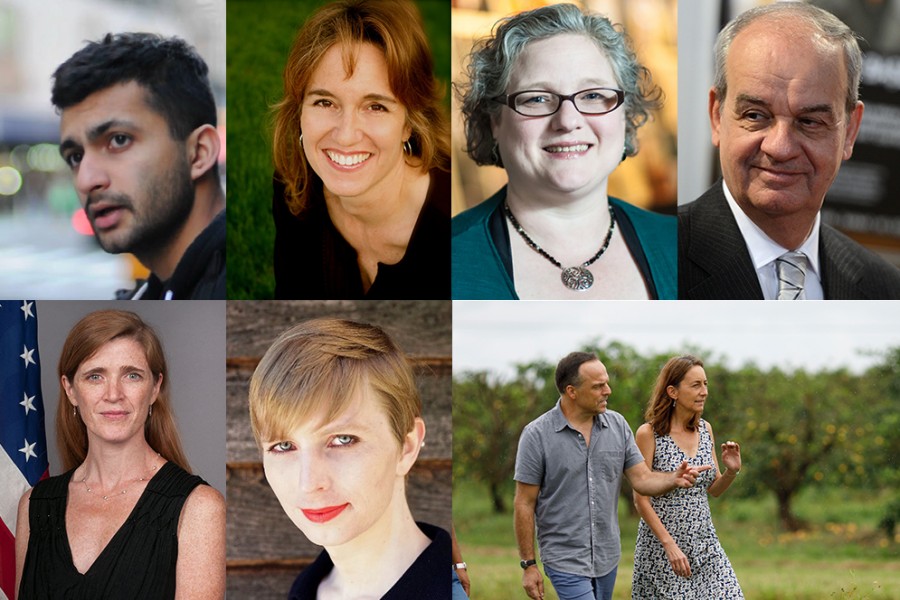 A polarizing transgender whistleblower, a former U.S. ambassador to the United Nations, and a human rights activist who recently won a MacArthur genius grant are among the presenters scheduled for the 2018 Foreign Affairs Symposium at Johns Hopkins University this spring.

The annual speaker series, founded in 1998, is organized and run by Johns Hopkins undergraduate students. All events are free and open to the public, though two of this year's events—former U.N. ambassador Samantha Power on March 13 and Chelsea Manning on April 2—require attendees to secure tickets in advance. Tickets are free and are available on a first-come, first-served basis beginning on designated dates (find more information below).

Five events are included in the initial lineup, and symposium organizers said they are working to schedule a sixth event. A limited number of season passes, which guarantee admission to all six events, can be purchased for $75 at JHU tickets.com.

The theme of this year's series is "Ravel | Unravel."

"Our theme is both a reflection and a challenge to the current landscape of political and social polarity," said senior Jill Pak, one of three executive directors of the series along with seniors Aliya Doctor and Katherine Gross. "Globally and in the U.S., we are witnessing in equal parts the making and unmaking of civil rights, institutions, movements, and communities. We recognize that the greatest difficulty many of us face is to grapple with the confusion and fear that pervades our everyday lives. It has always been a mission of FAS to make these tough issues and conversations more accessible and engaging to the Hopkins and Baltimore communities."

Panel discussion on comedy and politics

Panelists include Saturday Night Live writer Nimesh Patel; Sophia McClennen, an expert on political satire and founding director of Penn State University's Center for Global Studies; and Carrie Christoffersen, curator of collections at the Newseum. The discussion will be moderated by Bentley Allan, an assistant professor in JHU's Department of Political Science.

Başbuğ served as head of the Turkish military from 2008 to 2010 and was charged in 2012 with leading an illegal network seeking to overthrow the government of Turkish President Recep Tayyip Erdogan. He received a life sentence in 2013 on charges of "establishing and leading a terrorist organization," but his conviction was overturned in 2014.

This event is co-sponsored by European Horizons, a Hopkins student think tank that launched in 2016.

Power served as U.S. ambassador to the United Nations from 2013 to 2017. A graduate of Yale University and Harvard Law School, she also worked as a foreign policy adviser to Barack Obama during his 2008 presidential campaign and later served as special assistant to the president at the National Security Council. Her book A Problem From Hell: America and the Age of Genocide won a Pulitzer Prize in 2003.

This event is co-sponsored by the Aronson Center for International Studies and the Second Decade Society.

This is a ticketed event; tickets will be made available online on Feb. 27 at JHU tickets.com.

Manning is a whistleblower, activist, and transgender former Army private convicted by court-martial in 2013 of violating the Espionage Act by disclosing classified and sensitive military and diplomatic documents to Wikileaks. Manning, was imprisoned from 2010 until her release via presidential commutation in May 2017.

This is a ticketed event; tickets will be made available online on March 19 at JHU tickets.com.

Note: Manning's participation in the symposium is not an endorsement of her candidacy for U.S. Senate. As a 501(c)(3) nonprofit organization, Johns Hopkins University does not endorse candidates for public office.

Asbed and Germino, who both earned master's degrees from the Johns Hopkins School of Advanced International Studies in Washington, D.C., co-founded in 1993 the Coalition of Immokalee Workers, a human rights organization to eliminate injustice—including forced labor, sexual assault, and wage theft—in Florida's tomato industry. In October, Asbed was one 24 individuals to be named a 2017 MacArthur Fellow, an award often referred to as the "genius grant." Winners receive $625,000 to advance their work.

Asbed and Germino will receive FAS's annual Smedinghoff Award, named in honor of 2009 Johns Hopkins graduate and former FAS executive director Anne Smedinghoff, who was killed in a suicide bombing in Afghanistan in 2013 while delivering books to schoolchildren.

This event is co-sponsored by the Arrighi Center for Global Studies and the Johns Hopkins Alumni Association.