Pioneering scientist Murray B. Sachs, who led the biomedical engineering department at Johns Hopkins University for 16 years, died Saturday after a long illness. He was 77. 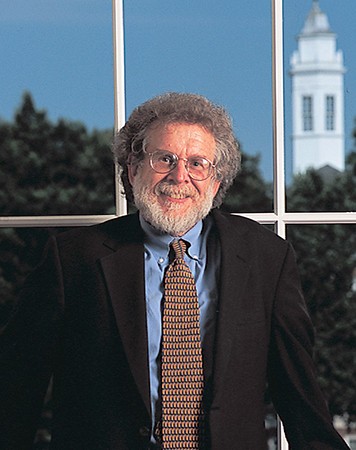 Sachs' research on how the brain receives and processes sound paved the way for the development of cochlear implants, electronic devices that deliver a sense of sound to people with hearing loss. He is also credited with doubling the size of the biomedical engineering department, creating a unique research and training environment housed within two Johns Hopkins schools.

Today, the department is one of the leading biomedical engineering programs in the world, with more than 100 affiliated faculty and nearly 800 undergraduate, graduate, and postdoctoral students.

"Murray Sachs' vision, his belief in the value of collaboration at the intersection of engineering and medicine, and his dedication to his department are the reasons why Johns Hopkins remains the world's leader in biomedical engineering research and education," says Ed Schlesinger, Benjamin T. Rome Dean of JHU's Whiting School of Engineering.

It was as a graduate student that Sachs became interested in the neural processing of speech after reading one of the first research studies to show the connection between the auditory and vocal communication systems in animals.

Following his graduate work, he served as a lieutenant in the U.S. Navy, where he worked on underwater submarine communications for two years. After completing postdoctoral research studies on visual neuroscience at the University of Cambridge in 1969, he returned to the U.S. Navy, working as a research scientist until the following year.

"Murray Sachs' vision, his belief in the value of collaboration at the intersection of engineering and medicine, and his dedication to his department are the reasons why Johns Hopkins remains the world's leader in biomedical engineering research and education."
Ed Schlesinger
Benjamin T. Rome Dean, Whiting School of Engineering

Sachs joined the faculty of the Johns Hopkins University School of Medicine as an assistant professor of biomedical engineering in 1970. He spent the rest of his career at Johns Hopkins, rising to the rank of professor in 1980.

When he first came to Johns Hopkins, he focused his research on how birds process birdsong. Using both experimental and computational methods, he became a leader of auditory neuroscience, studying how the brain receives and processes information about sound and speech. With his colleagues, he developed methods for estimating the responses of large populations of auditory neurons to sounds by recording and then modeling the flow of currents in the brain. He used this research to show how the brain processes human speech. This work provided a basis for designing and improving hearing aids and sound-restoring cochlear implants.

He was named University Distinguished Service Professor at Johns Hopkins in 2007 and, in addition to biomedical engineering, held the rank of professor in neuroscience and otolaryngology.

"Murray Sachs was a giant in the field of biomedical engineering," says Michael I. Miller, director of the Department of Biomedical Engineering at Johns Hopkins. "His pioneering work on the neural codes of auditory stimuli formed the basis for modern cochlear implants, arguably the most successful type of neuroprosthesis in the history of neuroengineering,"

Known as an inspiring teacher, Sachs trained many scientists who are now leaders in auditory research and other biomedical engineering disciplines.

Among the researchers he inspired is Natalia Trayanova, who currently holds the Murray B. Sachs Professorship of Biomedical Engineering at Johns Hopkins.

"The chair I hold in Murray's name was the result of many donors who came together to honor him and his achievements," she says. "It is the embodiment of his dedication to this department, and I am honored to represent him in this way."

Adds Stephen Desiderio, director of the Institute for Basic Biomedical Sciences, of which the biomedical engineering department is a part: "To me, Murray was first a teacher, then a mentor, and finally a dear friend. Our frequent Saturday morning coffees, which often included his wife, Merle, were a real treat. Our favorite topics were the future of science, the ineffability of nature, and sometimes, just how things were going day-to-day. He was a legend in his field, but he carried himself with the utmost humility."

Sachs was a member of many professional societies, including the Association for Research in Otolaryngology and the Society for Neuroscience. He was a fellow of the American Association for the Advancement of Science, the Acoustical Society of America and the Biomedical Engineering Society, and a founding fellow of the American Institute of Medical and Biological Engineering.

Among his awards are the lifetime achievement award from the American Auditory Society, an award of merit from the Association for Research in Otolaryngology, and the von Bekesy Medal from the Acoustical Society of America. In 2002, he was elected to the National Academy of Engineering, considered one of the highest professional honors accorded to engineers.

Sachs' wife, Merle, died on Feb. 11, 2018. They were residents of Boston. Sachs is survived by his son Benjamin and wife, Lisa, of Boston; son Jonathan and wife, Kate, of St. Paul, Minnesota; and six grandchildren.

Funeral services will be held today at the Temple Beth Avodah in Newton, Massachusetts.